A La Kart: An UnPub 5 Recap 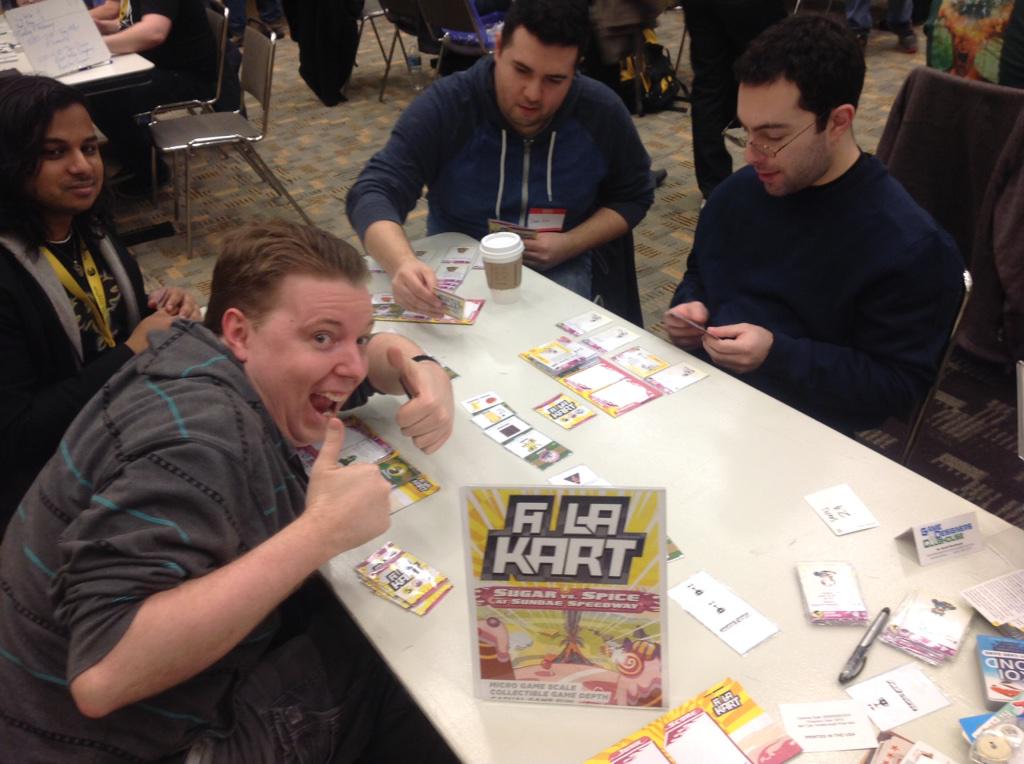 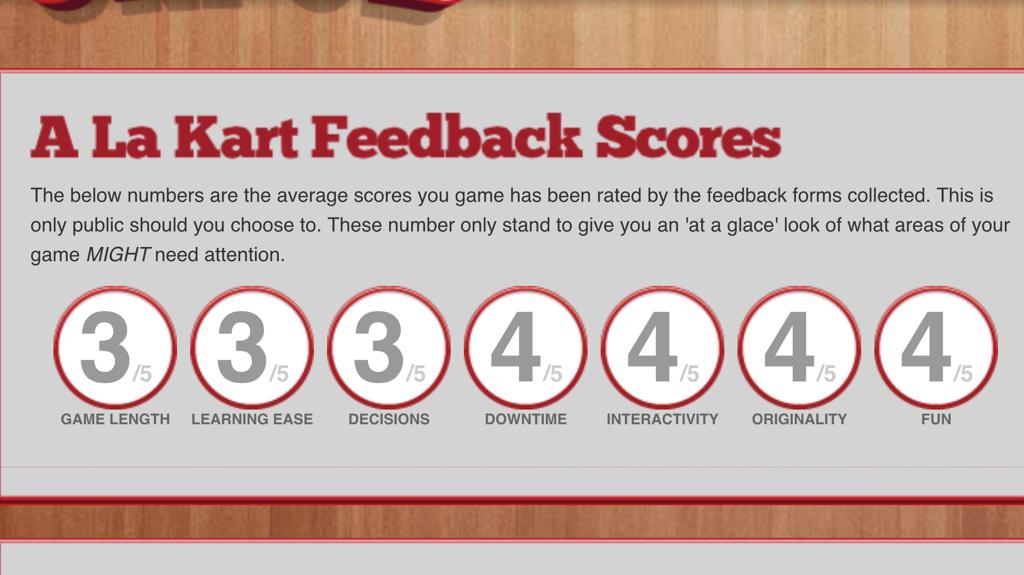 Well, I'm back on Earth after attending UnPub 5. With record attendance and a huge new location, it's clearly a new era for the convention as a whole. I found it a rewarding, invigorating, and exhausting experience as always.

There is no better place to be if you're a board game designer looking to put your game through the crucible of rapid-fire playtesting. Every single table was occupied throughout the weekend from what I could see. Many with lines of people waiting to playtest. If you've ever lamented the task of finding willing playtesters, UnPub is pretty much heaven.

Of course, playtests are very much work for the designer. I've described the UnPub weekend as a rock tumbler, where rough games eventually get smoothed out, but not without some hard hits along the way. I had done some intensive development work with the local Game Designers of Carolina before UnPub so I felt more prepared, but there was still plenty of work to do.

There is a lot to recap so I'll mostly focus on A La Kart here.


Friday
After a long travel day on Thursday, it was great to finally meet up with people mid-day on Friday. I spent a lot of it rehearsing for my talk on graphic design in tabletop prototypes. I hope that talk was useful to the attending designers. I felt like I pretty much stumbled through it, but throughout the weekend people were complimenting it. We're our own worst critics, I suppose.

With that done, there was a follow-up panel with a number of game manufacturers, publishers, designers, and retailers. It was a great mix and offered some very good lessons for new designers.

I really wanted to stick around for the panel with Mike Fitzgerald and Richard Launius, but a group came up asking me to teach them A La Kart. This is where I introduced the gimmick of making car noises once you've selected a card and put it down. This is an entirely fluffy element of the game, but really puts pressure on any AP-prone players to just make a decision and be done with it.

After that first session, another group came up to my table right after that first group was done. It went well, too. By the time I looked up, it was already time for the big designer dinner!

You can see how that dinner turned out in theONEtar's Day One vlog here! It's a very intriguing little logic puzzle she's developed there.


Saturday
A few early playtests on Friday and Saturday morning revealed some early stumbling blocks. In my effort to make the first set of cards (Sugar and Spice) an introduction to overall mechanics of the entire game line, it meant there was quite a learning curve for what at first glance looks like a light game.

I settled into a routine of explaining the premise of the game and getting past the first two turns as quickly as possible. I tried to re-assure testers that I would explain key mechanics along the way. For the most part, we covered all critical information by the end of the second turn, about ten minutes into the test. Overall, each session was only about 30 minutes and players were handling things on their own with a minimum of fuss by the end of the game.

Still, this method of instruction doesn't satisfy everyone. I could tell some players prefer to know the entirety of a game before making their first decision. I suspected that comes from a worry about making a poor choice based on incomplete information. I'm no mind-reader though, so who knows? I did always try to emphasize that everyone is learning the game together and that it'll make sense after two turns.

By Saturday night, I spotted all the stumbling blocks that were making the learning experience a bit of a hassle. I closed out the a little despondent after a very rough final playtest that I had to call early when half the group had clearly become disengaged. My score's across the board were 3/5, which felt really bad compared to Belle of the Ball's great scores from UnPub 3.


Sunday
The next morning, I made a bunch of small revisions which I describe in the following tweets:


I removed any negative-point mechanics. They turned off casual players, who then tuned out. #ALaKart #Unpub #UnPub5 pic.twitter.com/mrcPU9Mpvz
— Daniel Solis (@DanielSolis) February 10, 2015


I also capped all playtests to four players with Sugar, Spice, Fish, and Chips. I made several pasted-on edits to the cards for each character as you cans see above. After some revision, these four characters were simple enough to explain and play, so much so that I had a few repeat playtesters! Each session's testers had at least one person enthusiastically suggesting new powers and mechanics for custom racers. Over all, those 2-4 player sessions just sang.

As for the other two characters, Mac and Cheese were slowing down the games too much and I was spending a lot of time guiding players through their peculiar powers rather than shepherding the game as a whole. I realized need to frame that pair as sort of an "advanced" set of cards once players are more familiar with the basic mechanics. I made it a habit of closing out playtest sessions by enticing players with a brief description of how Mac and Cheese play. With a tutorial done, playtesters seemed much more excited about those possibilities.

Sunday closed out with my first opportunity to play other designers' games, including Elizabeth Hargraves's Bird World, Steve Caires' SmashWords, and Jeremy Commandeur's Pass the Paint.

It was also my birthday, which I totally forgot about until about mid-day. I had a lovely dinner with some folks I follow on Twitter and hung out at the after-hours conference room for some late night gaming.

So that's the meat of it! Plenty of stuff I haven't even touched on yet, but I'm sure this weekend will feed me with enough experience to write blog posts all month. In the mean time, watch the #unpub and #unpub5 hashtags on twitter! :D
a la kart unpub5