"Grid Bidding" Mechanism in the Lab 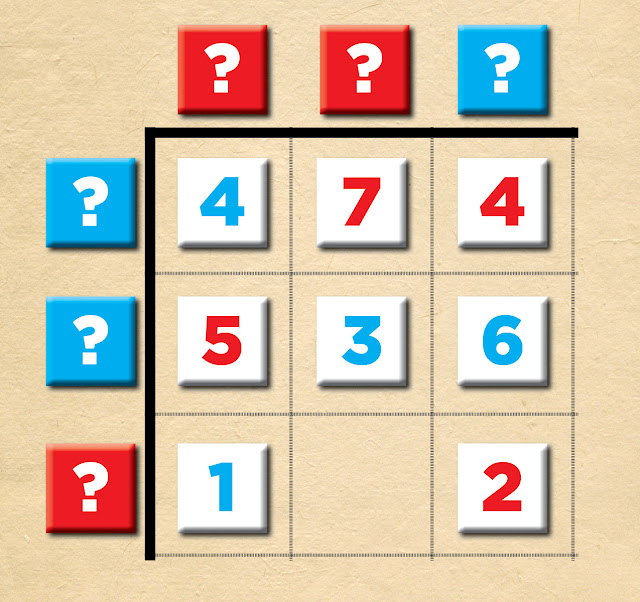 Here's a grid-bidding mechanism that I've had in the lab for some time and finally set down on paper earlier this week. Assume a two-player game for now: red and blue. Also assume each player has tiles numbered 1-7.

Set Up
To set up, each player takes turns setting one tile face-down along the top or side of the grid shown above.

Play
Each player takes turns placing one of their remaining tiles face-up in the 3x3 grid as shown below. 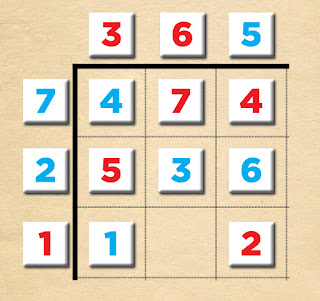 Score
Then it's time to score points! Reveal the hidden tiles now. Whoever has the highest total sum in a row or column in that 3x3 grid will win a number of points equal to the formerly face-down tile atop that column or beside that row. For example, in the top row, red has a total of 11 compared to blue's 4, thus winning 7 points.

Strategy
As players take their turns, they can infer a little about the value of each column or row based on the other tiles that their opponent is playing. 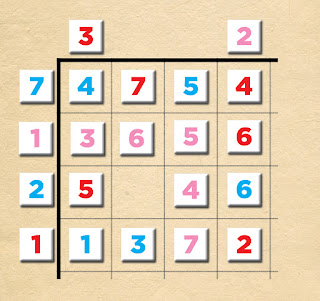 You can expand the board to include one more row and column for a three-player game. Each player still has seven tiles, but only takes two turns during the setup. 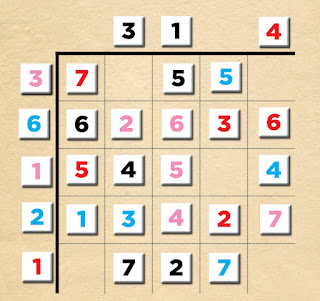 Again, you can expand one more row and column for a four player game, but still only giving each player two turns during the setup phase.

Where could this go?
I'm thinking about a short series of 2-player microgames composed of 14 cards, 7 for each player. Each player's cards have unique abilities that trigger as soon as they're played face-up. The "1" have more powerful abilities, followed by 2-6. 7 is powerful enough on its own without an extra boost. :P
And that's all just assuming this little mechanism is the entirety of the game. It may very well be just a mini-game as part of a larger middle-weight euro game where instead of points, this grid merely builds up currency for you to spend in the other parts of the game.

Similar Games
I tweeted about this earlier this week to see if it had been done before. There were similar ideas in Grave Business, but I think this is going in a different direction. Others pointed out superficial similarities to Cordial Minuet, but aside from being numbers on a grid, I don't think there's much overlap there. If anything, I'm more inspired by the gameplay of recently released Hocus, where you can work towards winning a pot or towards making the pot more valuable.
lab