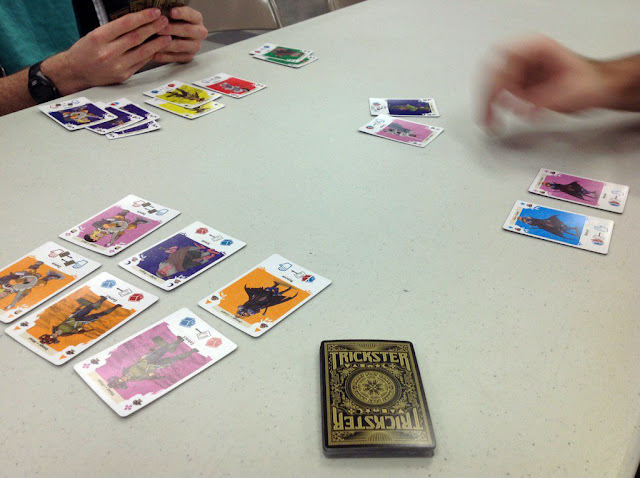 As a part of general development for Trickster, I'm taking a hard look at the 3-player and 2-player modes. The basic game has a nice sweet spot with 4-6 players, but to make the game viable at retail, we need to legitimately have a "2" on the box. So here's what I've got in the lab right now. For those of you who have at least two Trickster sets, here's what you need to do.

Set Up Changes
Your deck will need one more hero than normal. So, eight heroes in seven different colors, for a deck of 56 cards. (For my home tests, I liked adding the Miner from Symbiosis to the Fantasy set. She's a nice complement to the Rogue and keeps the overall effects pretty easy to remember.)

For Three Players: Clear an additional section of the play area called the Timeline. Set it to the opposite side of the Trash from the Deck. Deal a row of twelve cards to the Timeline face-down.  Turn the card at the front of the line face-up.

Play Changes
For Two Players: Each player will take at most two turns per trick instead of just one. In essence, you're playing a four-player Pot with just two players. So, the maximum size of the Pot is four cards. (Example: A is the leader and plays a card. B is the Trickster and plays the second card, thereby establishing the pattern. A plays the third card. B plays the fourth and final card.)

The oldest player takes the first turn as Leader in the first trick. The second player is the Trickster.  Thereafter, each player alternates Leader and Trickster roles regardless of who busted the prior Pot.

For Three Players: No player takes on the role of the Leader. Instead, at the start of each Trick, the card at the front of the Timeline is added to the Pot as the first card. Immediately reveal the next card in the line.

The oldest player takes the first turn as Trickster. Each player takes turns being Trickster clockwise around the table, regardless of who busted the prior Pot.

For Three Players: In addition to the normal endgame trigger, the game ends if there are no more cards remaining in the Timeline to add to the pot.

I'm trying to avoid a "phantom player" mechanism, but so far the Timeline mechanic in the three-player mode has proven to be a nice compromise. It doesn't force anyone to play a dummy player, but still allows a new type of strategy as you plan ahead for what you'll play on your upcoming turn as trickster.

If you get a chance to test these rules, please leave a comment! Thanks very much!
trickster