Trickster Playtesters! What are your thoughts on these possible revised powers? 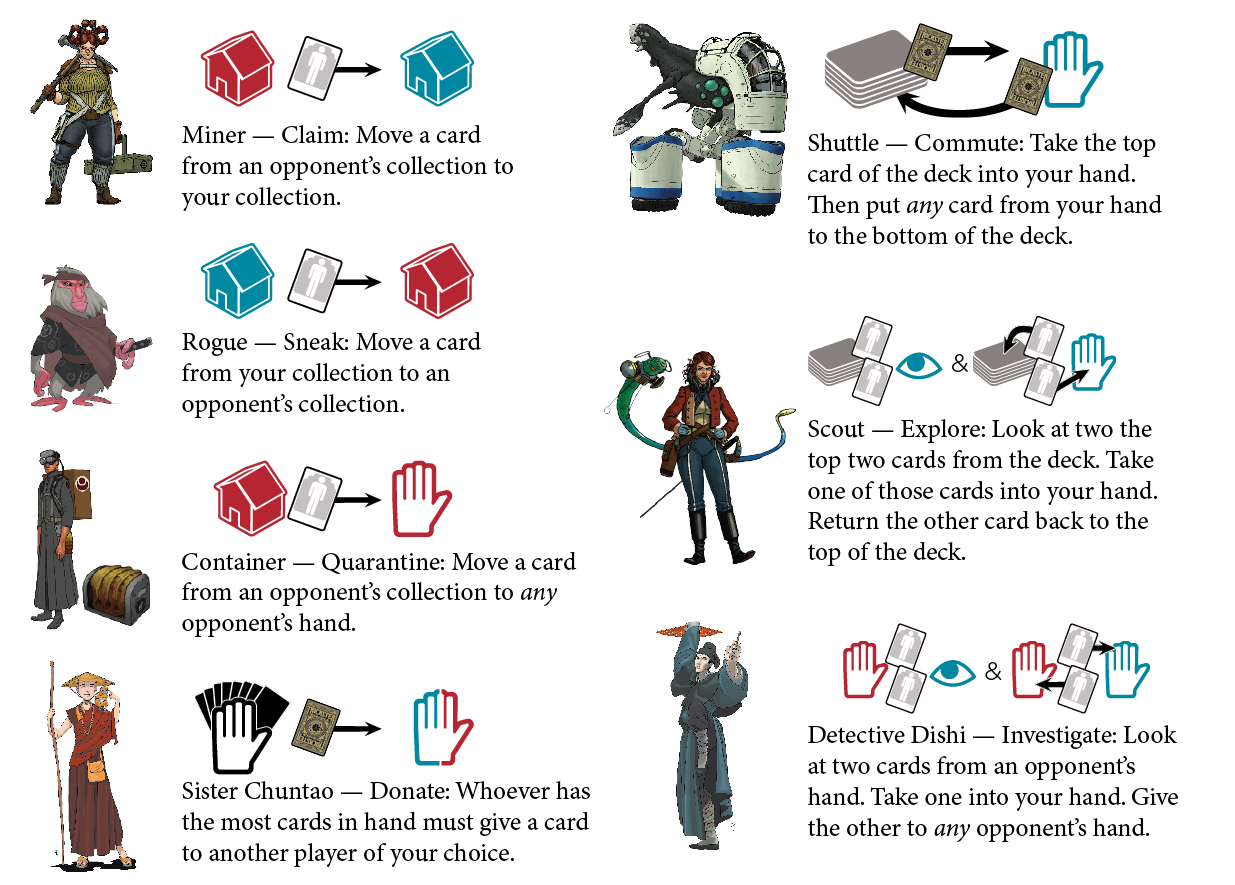 Based on input from Trickster playtests I announced the other day, I've proposed some possible revisions to cards in the Fantasy, Tianxia, and Symbiosis decks. Below is the list of possible revisions. None of these are final, but I did want to explain the reason for these changes for further discussion.


Trickster: Fantasy
Rogue
Sneak: Move a card from your collection to an opponent's collection.
Reason for change: It seemed that the Rogue's current abilities were too versatile and could do with some more focus.

Trickster: Symbiosis
Miner
Claim: Move a card from an opponent's collection to your collection.
Reason for change: This card was formerly referred to as the Archaeologist, which may still be a valid name for this revised ability. Her former card-flipping ability was sort of esoteric to explain in a deck that was already pretty out-there in terms of mechanics. Making her a counter-point to the Rogue seemed a nice complement to a more streamlined deck. Card-flipping might make an appearance in another deck where it feels more at home.

Scout
Explore: Look at the top two cards of the deck. Take one of those cards into your hand. Return the other card back to the top of the deck.
Reason for change: This card was formerly the Navigator. Her "detour" ability was relatively easy to explain, but tended to cause some stumbles when resolving a round. The turn order got confusing. This new ability was proposed as a way to make the deck a more relevant part of the game, along with the Shuttle as noted below.

Shuttle
Commute: Take the top card of the deck into your hand. Put any card from your hand on top of the deck.
Reason for change: The Scout and Shuttle might become the hub of Symbiosis deck's mechanics tapping into the deck as a resource. In this case, I removed the "shuffle into deck" aspect of the Shuttle's ability and replaced it with a "burying" effect. Whereas the Scout gives you more control of "drafting" from the deck, the Shuttle gives you more control of your hand management and suit majority.

Container
Quarantine: Move a card from an opponent's collection to any opponent's hand.
Reason for change: The Container's previous "swapping" ability didn't really feel like a containment and it didn't involve any other players' game states. I like abilities that affect some other aspect of the game beyond the self, even if it's a relatively neutral aspect like the Exile, Pot, or Deck. In this case, the Container has a much more subtle effect since it's entirely outwardly focused.

Trickster: Tianxia
Detective Dishi
Investigate: Look at two cards from an opponent’s hand. Take one into your hand. Give the other to any opponent’s hand.
Reason for change: Detective Dishi's former ability simply let you draw a card, which is not something most players ever wanted to do. Yes, there is a chance you could get a lucky draw that gives you majority in a suit, but that was too risky to be an interesting choice. More often, Dishi becomes an albatross that players reluctantly play or give away with the Adopt or Flurry ability. Besides that, "investigate" didn't even feel like a thematically correct term! Hopefully this revised ability better fits the theme and is more tempting to play.

Sister Chuntao
Donate: Whoever has the most cards in hand must give a card to another player of your choice.
Reason for change: This is only a small revision to Sister Chuntao's ability. Determining who had most cards and who had fewest took a few extra seconds that just slowed down the game too much.  I kept "most" and now allow you to choose any player as a recipient.


I'd like to get your input on these if possible. Maybe even try testing them out at your next session?
trickster