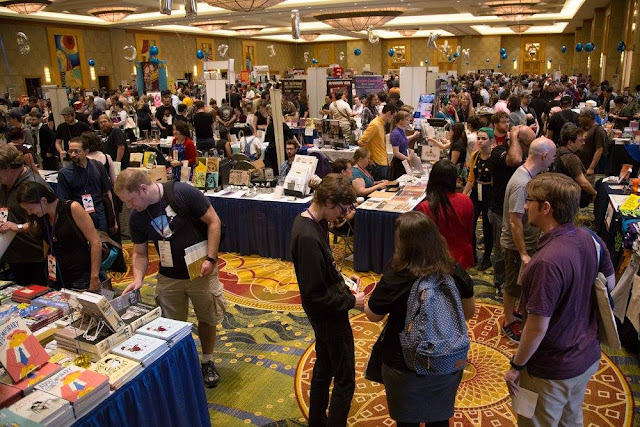 For the past three years, my wife has been an active volunteer staffer and coordinator for the Small Press Expo, a long-running comic convention devoted to independent and alternative cartoonists and comics creators. I tag along as a general volunteer floating around the show helping wherever I can. It's a great opportunity to see a vibrant diverse creator community at its most positive and active. Naturally, I couldn't help comparing it to the tabletop community. What follows are my very loose observations and comparisons between the two groups. 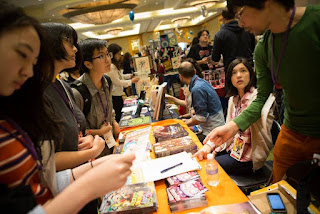 Shared Challenges
Comics and tabletop games creators both face the same challenge of selling premium physical goods to niche audiences scattered over long distances. Digital and easy-access alternatives are readily available for comics and games, but they're usually lower priced (or free), thus making them loss-leaders in an effort to actually make a living at the trade. Before that can even happen, both creators need to find a critical mass of readers/players who can support creating more of that material.

Comics have the advantage of density and low barrier to entry here. SPX packs in as many creators as a medium-sized game convention in half the space. I was so envious that customers could pick up a comic and start experiencing it right away. No need to find willing co-participants and table space. Lucky ducks. :) 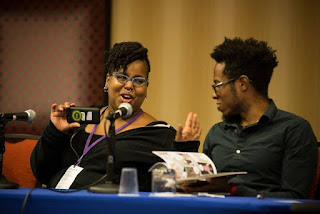 Shared Solutions
SPX thankfully offers a shortcut for creators to reach eager audiences by putting everyone in one place for a whole weekend. Game design conventions like ProtoSpiel, UnPub, and Metatopia offer similar opportunities for tabletop creators. Outside of those shows, crowdfunding options like Patreon and Kickstarter allow both creators to get new income streams and support the creation of more premium products. The best solution both share though? Creator communities sharing their expertise with newcomers.

Comics and games are about on equal footing here, with active communities of independent and part-time professionals all sharing their business experience with each other. With those silos taken down, comics and games both have really fertile ground to bring up new talent in the field and promote existing talent to more full-time work.

Tabletop game publishers would do well to reach out to comics artists from SPX and the larger indie community. They're driven, resourceful, and excited. 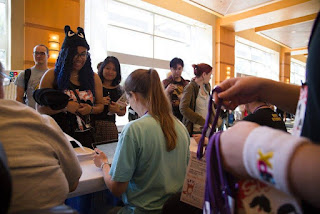 The Indie/Pro Pipeline
Speaking of working... Nickelodeon was at SPX this year actively taking pitches from comics creators all weekend. I'm not sure what the later stage plans are with that process, but it was nice to see the procedure so nicely formalized. On the game side, publishers already do this sort of thing at speed-dating events, playtesting conventions, or even reality shows.

That said, I gotta give comics the edge here specifically for one event: The Ignatz Awards. It's a great chance to spotlight and promote independent talent. SPX hands out gold stickers to Ignatz winners to add to their books the following Sunday, thus encouraging more sales. Tabletop's closest equivalent is the Ion awards or the print-and-play competitions on BoardGameGeek, which unfortunately don't yet have the prestige Ignatz has built up over twenty years. Maybe some day!

Still, the process of going from independent to a signed pro are pretty much the same in both industries: Work a lot, in public, on a regular basis. Where are tabletop's "zines"?
Zines are homemade little books with sketches and comics connected by a single theme. Sometimes they're funny, sometimes they're deeply personal, but they're always low-cost. They offer an even easier point of entry for a curious shopper who may not be ready to buy a high-dollar full-color hardback.

I kept thinking about what tabletop's "zine" equivalent might be and all I could come up with was the Tokyo game market, where homemade games with extremely low print runs get sold directly from the designer. The space at SPX and the game market bear remarkable similarities as well, with shoulder-to-shoulder booths and a broad mix of indie and large publishers. I can't help but wonder if  manga shows set a useful template for Japan's tabletop designers to follow with their own marketplace.

On this side of the Pacific, I should give props to James Ernest for Cheapass Games, which exemplified the zine-style punk rock publishing ethos for years. Today, tabletop role-playing games are ahead of the broader tabletop market, with active business for PDFs, ebooks, and POD books. I think the book part of things is important to take into account, though, as it's much easier to sell that one item than a big heavy box of lux components. Still, POD card games have what it takes to fill that "zine" niche. (I can certainly recommend a few!)

Phew! Those were my very loose observations from the perspective of an indie tabletop designer. I want to thank the whole SPX crew and crowd for being just 100% awesome all the way through.

I collected a LOT of business cards, which I'm compiling into a pinterest board: Check it out, find some comics to read, and artists to hire!
business spx