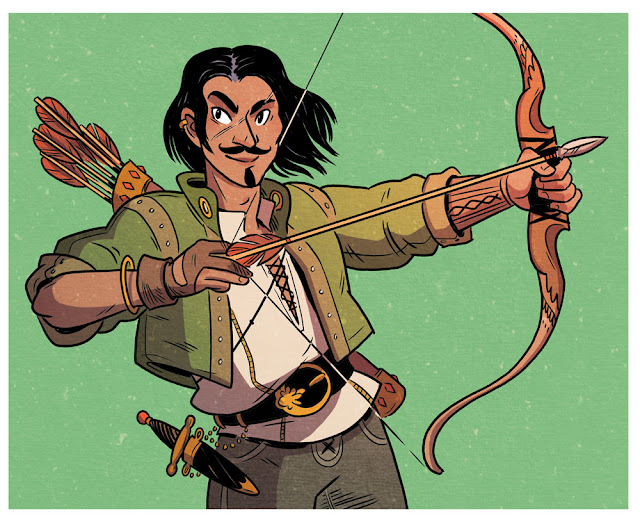 Huzzah! Molly Ostertag just wrapped up a new batch of art for Curse You, Robin Hood! These are the legendary characters Robin Hood, the Sheriff, Maid Marian, Will Scarlet, Little John, Friar Tuck, and the Prince. Here are Molly's final pieces with some of the art direction.

I wanted a more ethnically diverse retelling of the Robin Hood myth, set closer to the Iberian peninsula than Britannia. That flipped things around with casting a bit as the Sheriff would end up looking more like Errol Flynn.

Maid Marian was the only prominent female character in the lineup originally, so I asked Molly to model Will Scarlet on a roguish Ruby Rose. Little John was modeled on the Rock.

My art direction initially called for the Prince and Sheriff to be flipped here, but Molly's renderings were so distinctive that they seemed more appropriate this way. This is one of those nice cases where being in the driver's seat lets me adjust the game mechanics to suit the excellent art.

For more on Curse You, Robin Hood!
» One-Page Summary

Find more of Molly Ostertag's art on her website.
Curse You Robin Hood