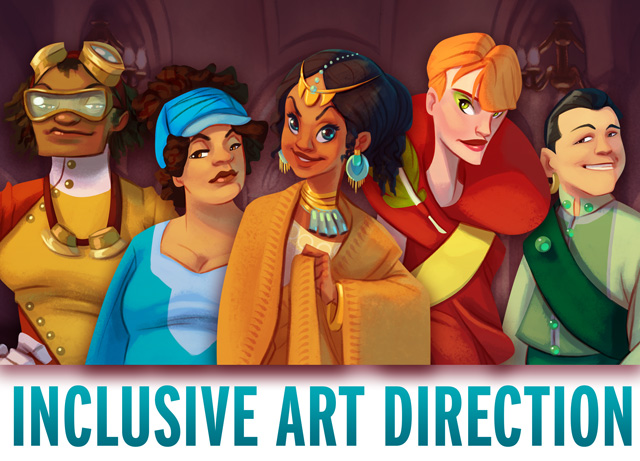 When I get the wonderful opportunity to art direct for new characters, it's like opening a big awesome toy box. I have to remind myself of some things so I approach this job responsibly. This isn't necessarily a "tips" list, or in any order of priority, it's just what I try to keep in mind. Hopefully it's something you might find useful, too.

An inclusive mindset is a crank, not a switch.
It isn't a one-time flip from ignorance to enlightenment. It's an ongoing process of checking self, looking back on mistakes, and making assertive efforts to do better. I've never been and never will be 100% "woke," but I must keep trying to "wake up." I will make (and have made) mistakes, but that isn't an excuse to stop putting in the effort to be more inclusive. This has real practical impact when I'm working on a project as an art director. As an art director, I have so much freedom to guide artists in certain directions that it's an awful missed opportunity if I don't at least try to push.

» For more, see the Parable of the Polygons.

Question the "default."
You know how Earth is moving around the sun and the sun is moving through the galaxy, but we don't recognize it because we are born into it? That's sort of like the "Default." My beliefs, body, culture, class, or anything else is not the "default." The "default" is just the motion we're born into and assume is the standard forever. In truth, the "default" is the inertia of history, family, and culture. If I stop putting in effort, just trying to remain "neutral," I turn into debris floating along with that inertia, harming people in my path who can't go along with that inertia. It takes ongoing effort just to keep myself standing still, holding what little progress I've made in improving myself. It takes even more effort to actually move against that inertia, to change what is considered "default."

Accept responsibility.
Sometimes I see questionable art direction justified by "It's what the market wants" or "It's historically accurate." Even granting that, which I do NOT necessarily, it is still an art director and creator's choices that rule the day. A fictional character doesn't have an ethnicity, gender, body, or pose by accident. It's a creator's choice to present a character a certain way. Even in video games with character customization, the creators set the options available. If an option is available, that's a choice. If it isn't available, that's a choice, too. Deferring and defaulting is a choice; one that I'm trying not to make whenever possible.

Know the roles and their history.
I have to ask myself who I'm casting as a villain, a hero, the sidekick, the comic relief, the sage mentor, and all of the other standard tropes. Each of those roles has a real-world history behind it, with many examples of under-representation or ugly caricature. If I'm casting a straight white able-bodied man as the "hero," each one of those attributes is the path of least resistance. I must at least try to counter the history of under-representation or over-representation in certain roles. Does that hero have to be a white man? Are you really going to make another albino villain? If there is only one person of color in a cast, can there be two? If there are already two, can there be four? Half the cast? Most of the cast? Whether my client will go along with me, I must at least try to be the annoying force pushing for more inclusion.


» For more on race tropes to be aware of, check out TVtropes.

Character design has gameplay value.
When I cast the characters for Belle of the Ball, illustrated by Jacqui Davis, I knew they'd be divided into various sub-groups which would represent individual counties and factions. It greatly eased gameplay if each sub-group shared certain characteristics like color scheme, occupation, wardrobe, and ethnicity. It would really help gameplay if the characters who shared some game mechanical traits also looked similar to one another, so they could be recognized across a table, upside-down. In the effort to build those visual similarities, I tried to make sure there was a broad spectrum of ethnicity, age, body types, and gender expression. It wasn't just "pandering," there was real gameplay value in organizing the character design this way. Now I'm working on another game where there aren't really any factions as such. Each character is a unique individual and must all be easily distinguished from each other. Towards that end, I'm being much more assertive in seeking unique intersections of these attributes.

» For more, see Subjective Guess Who, an effort to fix the classic game.

Randomization is a start, not an end.
If I'm casting 60 characters, I’ll try to make a bunch of different lists of various attributes like ethnicity, age, gender expression, and so on. Then I randomize all of these variables for the entire cast, thereby (hopefully) breaking any of my own biases about what a "Fighter" should look like. Even with those tools, I have to remember not to defer responsibility. I can’t lean back and say  "The machine made all the men white. Not my fault! Sorry you're offended!" I must check each outcome and see if it falls in line with the “default.” If so, I give it a really strong skeptical look and decide if I need to swap out or replace some attributes. Generally these changes are towards more diverse intersections. If one intersection is over-represented, I’ll try to change those to push for more even distributions.

» For more, see the RandomizeList tool to randomize your own lists.

Art direction is still my own choices, I have to check it against history and be conscious of the inertia at work in my biases. What do you think? Am I missing something huge here? Is there anything you remind yourself of when you're doing art direction? Share your thoughts in the comments. :)
art game design graphic design