Game Design Outside the Euro-American Binary 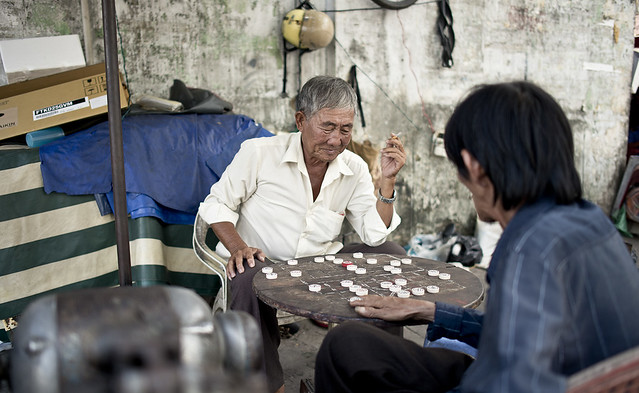 Here's a cool article from about a year ago about "weird" human behavior researcher Joe Heinrich discovered when he played perception and fairness games with indigenous and non-Western cultures. (Here's a link straight to his paper.)

In the Ultimatum Game, anonymous separate participants play for cash. One player gets all the cash and must offer an amount to the other player, but if the recipient declines the offer, then both players don't get any money. What we would expect is the giver to offer a 50-50 split because it's fair. Anyone greedy enough to offer less than that risks losing the whole pot.

Here is what happened when he played with the Machiguenga, the indigenous Peruvians of Machu Pichu:

"When he began to run the game it became immediately clear that Machiguengan behavior was dramatically different from that of the average North American. To begin with, the offers from the first player were much lower. In addition, when on the receiving end of the game, the Machiguenga rarely refused even the lowest possible amount. “It just seemed ridiculous to the Machiguenga that you would reject an offer of free money,” says Henrich. “They just didn’t understand why anyone would sacrifice money to punish someone who had the good luck of getting to play the other role in the game.”"


Turns out that North Americans have a peculiar set of cultural circumstances that make our cognitive development statistically uncharacteristic compared to the rest of the world. Therefore, the psychology tests, perception tests, studies of fairness, economics, game theory, and all that other stuff we believe to be universal to humanity is in fact just idiosyncratic. Shocking!

So you might ask why Heinrich's findings matter to you if your audience is typically familiar with American and European sphere. Sure, if you were designing a game for the Machiguenga, you would have to do a bit more research to see which "difficult" choices are actually all that difficult in their culture, but otherwise why look outside of our cultural environment?

To do so ignores how selective the data is in current psychology, with little representation outside of the Western academic context. According to Psychology Today:


Not exactly the most representative sample, eh?

Design from the World

No culture is monolithic, and strains of differences thread through any community. Certainly on an individual level, people have different senses of fairness and equitable trade. That makes games fun!  That also makes Heinrich's findings all the more pertinent for all game designers.

There are many logical fallacies and behavioral trends we might consider universal elements in ludology, including loss aversion, sunk cost fallacies, prisoner's dilemmas, and so on. How much of our understanding of these phenomena are compromised because their source data comes from a tiny American sub-population?

I look forward to the days to come when game designers outside of the Euro-American binary bring a fresh perspective to our craft . We already see inroads...


I'd love to hear about any more designers from outside Europe or North America. Any to share? What new insights into game design and player behavior are coming from around the world?
game design