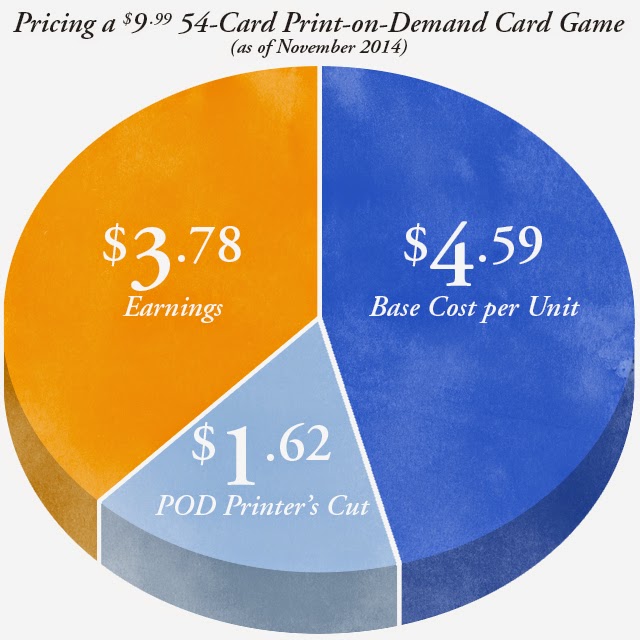 The first full year of Smart Play Games is coming to a close soon and I've collected many many capital-O opinions about the viability of the POD business model for indie card game designers. Overall, I'm favorable and very pleased with my results from 2014, but the economics of the system shouldn't be taken lightly. Today, I wanted to talk about pricing in the POD market. If you were curious about what goes into the pricing of POD products, the general idea is...

My own earnings come from the margins I choose for each sale of a product, which DriveThruCards allows me to set at my discretion. I quickly found that a 90-card deck would need a commensurate higher price, but then I started hitting a ceiling. $14.99 games just weren't selling well. Instead, I found that $9.99 is the sweet spot for POD pricing. It's low enough to be an impulse buy, but high enough that I can still afford to do the occasional promotional discount. Anything higher than that gets a measurably lower sales.

Therefore, each card I add to a deck cuts into my overall earnings. For example, a card game like Light Rail has 10 cards per player, for up to four players, plus 8 bonus cards. That puts me up to 48 cards for the game alone. Now I add one card to act as the "cover" of the product. Then I add 6 cards for the rules. That puts me at 54-cards, which turns out to be just right to have a set a livable margin of profit for my work. See the pie chart above for how it breaks down.


Minor League System for Board Games

But even that presumes there is an us/them between POD and traditional releases. I've always held to the belief that POD is a complement to traditional publishing. It gives smaller card games a chance to perform on the marketplace with minimal risk, like minor league farm teams for the majors. When card games start going out of print in traditional retail networks, they can live on in POD for more long-tail sales, still earning revenue for the IP owner long beyond its retail life cycle.

I'm pleased to have seen Koi Pond get licensed by Joy Pie in China. Just a few weeks ago, Suspense and Light Rail were picked up by Funbox Jogos in Brazil. The "POD model" isn't an island. It exists in symbiosis with traditional publishing.

I hope other designers will soon experiment with this model, especially on DriveThruCards, who have been so extremely helpful and supportive from the start.


Update: Feedback from Other POD Publishers

After this originally posted, I got some very generous feedback from Fred Hicks (Evil Hat Productions) and Steve Segedy (Bully Pulpit) regarding their own sales numbers.