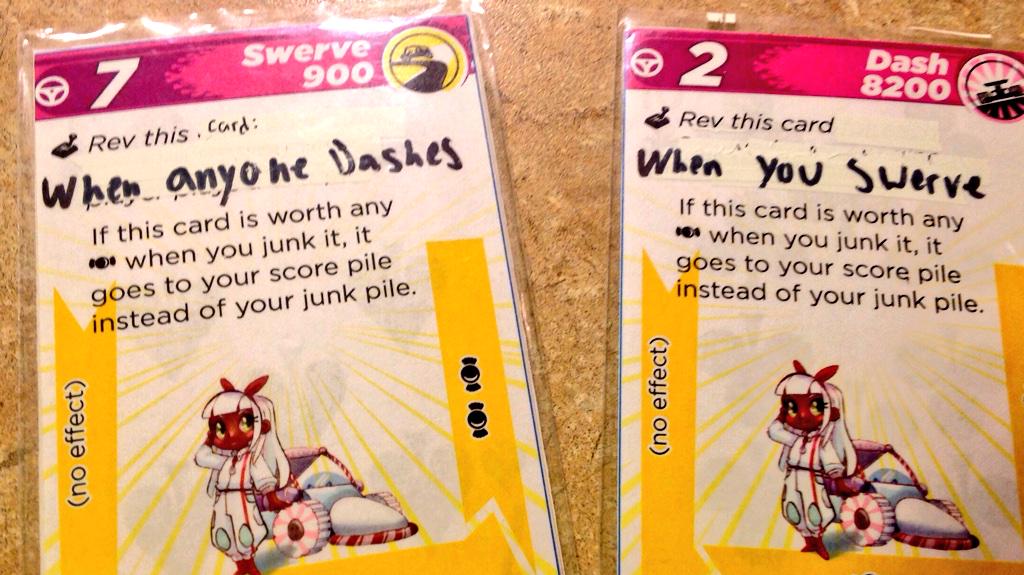 I ran into two situations in A La Kart playtests where player intuition conflicted with how the game actually worked. In one case, I'm flexing to that intuition and redesigning a mechanic to correspond to that instinct. In another case, I'm standing my ground and keeping the mechanic the same


Case 1: All that junk in my trunk
When you play a card in A La Kart, any of its immediate effects are resolved in ascending order of speed, then you claim rewards in descending order of speed. Once all this is done, you "install" this card into your "engine," which is a small tableau in front of you. Consider this something like the battlefield in Magic or Hearthstone.

Cards in your engine may have ongoing effects or boost the power of future effects. For example, a card's immediate baseline effect might be that you will get a speed boost while claiming rewards this turn. As a bonus, if have other cards with a particular maneuver already in your engine, you get an even bigger speed boost.

When you install a new card into your engine, you may "junk" an old card to the discard pile and replace it with your new one. Your engine only has room for four cards, so once it's full you must start junking at that point. This engine is the heart of the game and how I've given a 12-card deck a deep decision-tree. There was one question that kept coming up, though.

FAQ: Can I junk the card I played this turn or do I have to install it and junk an old card from my engine?
Answer: Throughout the playtests, my response was that you do have to install the card you played this turn. This made some interesting dilemmas as some players had to sacrifice helpful cards and carefully time which cards they played and when. However, it was often just a stumbling block in learning the game since in most card games you can just discard immediately.

I'm going to test a version of the game where you can junk a card on the same turn, just to see if it really changes the game that much. I doubt it will, and more than likely I'll bend to player-intuition here.

If frequently I answer "no" to a procedural question, it's usually best to say "yes" and design around that instead.

Case 2: Need for speed
As mentioned earlier, players claim rewards in descending order of speed, from highest to lowest. When it is your turn to claim a reward, you simply take the first available card from the track. You do not get a choice. That means sometimes your "reward" will in fact be a hazard. (Presently, the only effect hazards have is that whoever has the fewest in their collection at the end of the game gets bonus victory points.)

The various rewards on the track are randomly laid out and visible ahead of time, so you at least know what's coming ahead before you decide to play your card. Sometimes you want a low speed in order to dodge a hazard that's immediately in front of you. Sometimes you want a high speed if the first reward would help you complete a scoring set. It varies each turn.

One last note, for context: The fourth and final turn of each lap is a pure straightaway without hazards. It is simply a trophy worth a flat set of points and is awarded to whoever plays the top speed. No other rewards for anyone else. In this case, having high speed is pretty much the easiest choice, but the preceding turns may have depleted your fastest cards from your hand.

FAQ: Why can't speed be a drafting order, so I get my pick of the available rewards? It doesn't make sense that I'd want to go slow in a racing game.
Answer: I think this is another one of the hang-ups of using a quasi-racing theme when in fact the game really models something like a Gymkhana motorcross. It isn't just about speed, but about nimbly dodging hazardous curves and dangerous opponents. Sometimes that does mean slowing down a little so another driver can be the first to hit the hazard while you slide on by. (Luigi death stare optional.)

More than that, this "first come, first served" style of claiming rewards gives very high and very low speed cards utility based on the conditions for that turn. If players could draft their picks, then low speed cards inevitably get the most hazards. That compounds the benefits for high-speed drivers since they'll get rewards during the main sections of the course and the final straightaway.

Sometimes complaints about game mechanics come from the theme not being presented well enough as a learning device.


So that's where I'm at right now on both these issues. I'm bending to the first, resisting the second. Hope that's the right move!
a la kart game design