Choice and Time: When do negative points work in games? 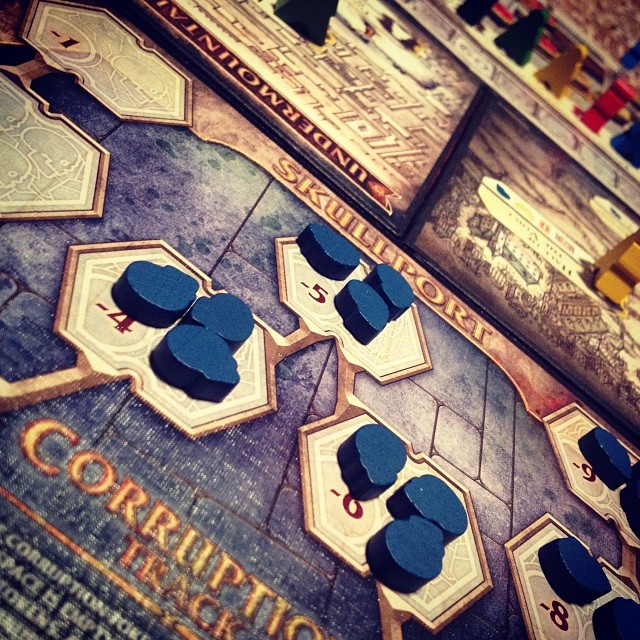 One of the best lessons from UnPub 5 is how difficult it is to make negative point scoring feel right. Negative Point Scoring is pretty much what it sounds like: A mechanism in which players can lose points and possibly end up in negative range at the end of the game. Let me back up a bit to give you some background on A La Kart:

Originally, my system for scoring hazards was that the first didn't cost anything, but the second cost one point, and the third cost two. The fourth hazard began a new set, so it didn't cost you anything, but the fifth would cost another point and the sixth would cost another two. Because each player only scores one prize each turn, and there were a total of twelve turns, that meant hazards felt especially punishing.

Players were disengaging as they saw their score fall ever deeper into a seemingly insurmountable debt. It just wasn't fun.

Thanks to some input from Jeremy Commandeur, I realized that simply missing an opportunity to score was bad enough. There was no need to compound that missed opportunity with further punishment. All it did was trigger a player's loss-aversion instinct and overall give players a sour taste for the game.

Because players had to take the next available card, they sometimes would accidentally stumble into hazards. I didn't give them enough control or time to avoid piling up a big stack of negative points. It just wasn't the right fit for the gameplay. So I removed negative points.

The next day, I decided hazards wouldn't cost any negative points at all. Instead, having the fewest hazards at the end of the game would give you a bonus of 5 points. Playtests with this system came out far better. Players were not as dismayed at taking hazards as much since it didn't technically cost them anything as long as they still had the fewest in the group.


This was my lesson from those playtests...


Give players the CHOICE whether to risk going negative.
Then give players enough TIME to mitigate that risk.


In Scoundrels of Skullport, you can avoid corruption as much as possible and come out ahead. What's more, you can take just a little bit of corruption while planning to buy it off with helpful quests and intrigue cards. You could still come away with less steep a penalty than opponents who wallowed in the underworlds.

In Ticket to Ride, you might score negative points if you don't complete a ticket, but you decide whether to keep that ticket in the first place and can spend the entire game making sure it's worthwhile. You don't have to take any more tickets than you initially got in the setup, but you are quite free to take that risk if you're feeling confident.

Negative points are fine, as long as players know they're making that risky deal and they have enough time to offset those costs. Those two in combination make a fun decision and an opportunity for players to feel clever. That's a win/win to me.
a la kart game design unpub5