Heir to Europa at UnPub5 Check out these cards and promo art for Nick Ferris' HEIR TO EUROPA, which will be up for playtesting at UnPub 5 this weekend in Baltimore. This is the first licensed game for Smart Play Games and a really exciting start to the year. I hope to see you at UnPub! Here's more about the game. 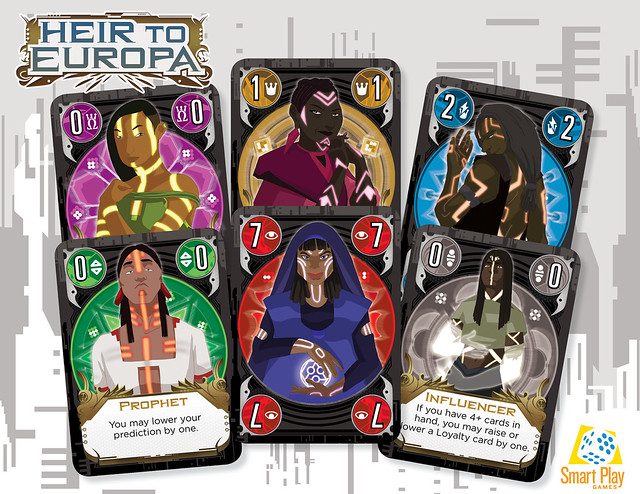 In a distant future, psychic powers make warfare obsolete across Europa... Until the ruler of disappears, plunging the entire moon into a succession crisis.

Psychic scheming meets courtly intrigue in this exciting new card game of prediction and influence. Players vie to become the power behind the throne, predicting who is next in line to become ruler of Europa and manipulating the court to make those predictions come true.

At the start of the game, players predict how many coteries they'll win to their side. Each turn, you play one card from your hand, representing your soliciting help from a political ally. If that ally has a special ability and their faction is still loyal, you may activate that special ability as well. Each time a faction comes into play, its loyalty lowers by one. You must decide when it's best to play a lower value card to use an ability while you still can.


It's a really fun spin on standard trick-taking. The game itself is 48 cards, plays in around 20 minutes, for 2-4 players aged 10 and up. Expect more from EUROPA in the coming year.
Heir to Europa unpub5