He ain't heavy, He's a Euro 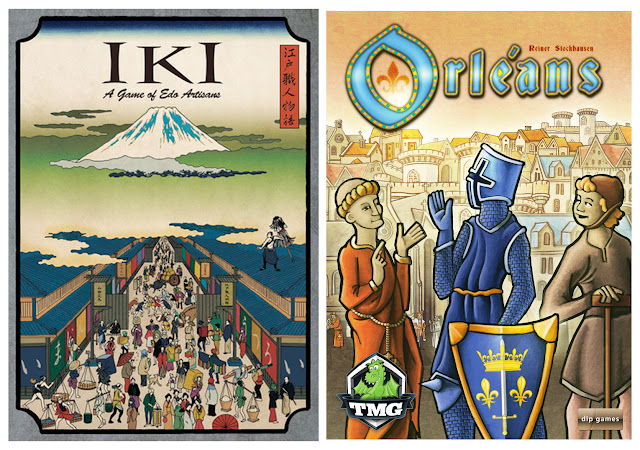 I had the great pleasure of attending Whose Turn Is It Anyway? this weekend. It was a lovely experience and a great opportunity to stretch my muscles on some heavier games.


Ever since publishers asked me to design more "middleweight" games, I've struggled to find a definition for that category. Certainly my existing catalog favors helium-light gameplay. My experience is very limited in this sphere so I'm actively trying to sample more heavier games this year. If I want me to design "middleweight" games, I better try out some heavy games so I can properly calibrate my perspective.

From Japan to France

Back to Whose Turn! I tried out Iki: the Edo Artisans, designed by Koota Yamada, and Orléans, designed by Reiner Stockhausen. I had very good teachers for both games so I picked up the nuances pretty quickly.  Neither had the hefty ponderous atmosphere that I had expected "heavy" games to have. They were both certainly long games, clocking in at about two hours each with a tutorial.

Simple Actions on Loop
Still, the actual actions of play were very easy to learn and simply iterated themselves.

In Iki, you move you choose your turn order for the round, then on your turn move your pawn a fixed number of spaces around a board, then take whatever actions are available to that space. Those actions may result in earning various types of income at the end of each month or change the turn order in the subsequent turn.

In Orleans, you draw workers from a bag, assign certain combinations of workers to specific actions, then go around the table resolving one of each player's actions at a time, discarding the requisite workers back into your bag as you do so. The result is similar to a deckbuilding game, except it's a bag of chips instead of cards.

A Timer of Random Events
Over and over again, those simple actions would repeat themselves until the endgame was triggered at a pre-determined moment:

In Iki, that was determined by a pre-set calendar of 12 months, with periodic fires breaking out every few months. The monthly intervals were at a different rate than the fires, so you couldn't get complacent about having everything happening at once. Also the fires break out at random quadrants of the board, so you're never sure whether your artisans are safe for the next round.

In Orleans, it was determined by a stack of random event tiles that gradually empties out. Some of these events cause you to pay extra for resources you've acquired, but others allow you to earn income based on your progress on several different tracks.

So in essence, both games were fun challenges of efficiency to earn as many points as possible before the deadline. That seems very easy to understand. Why do I have this impression that "heavy games" are more difficult than this?

I asked folks nearby whether these games would be considered "heavy" and it was hard to get a solid answer. One attendee said he usually likes "lighter" games, by which he meant something like 45 minutes to an hour. I asked my followers in this tweet for their take, which revealed a few leading indicators:
Now I at least have a better sense of direction for where I should take my own games.
game design