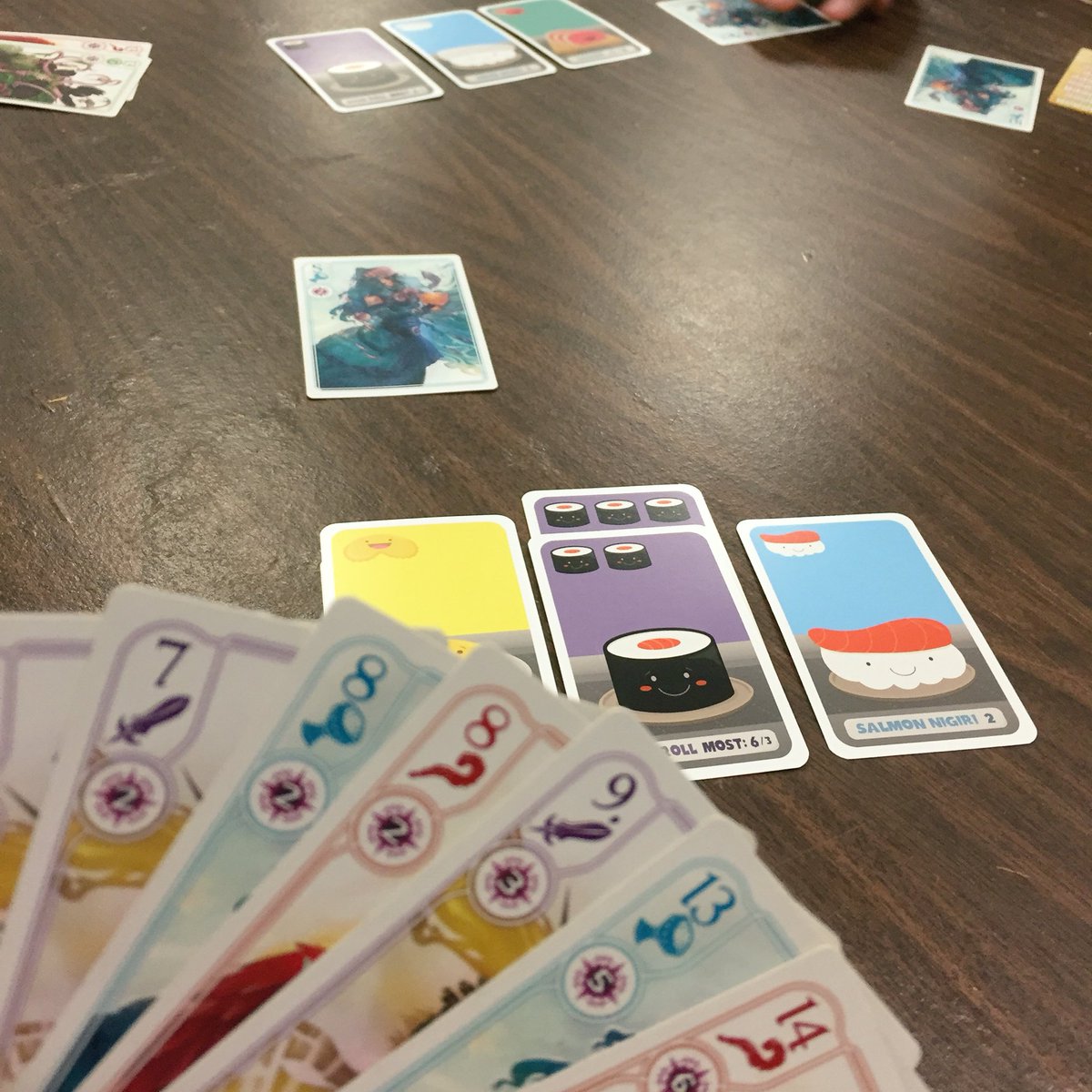 First up, a poker auction game. The idea here is that you could play out an auction using poker hands instead of money. I liked the idea that instead of a 1:1 ratio of dollars to bidding power, a poker hand could have an unpredictable bidding power.

To get the alpha on the table as soon as possible, I just cannibalized a first edition of Sushi Go as a placeholder set of set collection cards. I also grabbed a Hocus deck since it had a convenient summary of poker hands. With the Game Designers of North Carolina, we play stormed the following game:

SET UP
Remove the chopsticks from the Sushi Go deck. Shuffle it together and deal out five lots of three random Sushi Go cards each, lined up in a row. Shuffle the poker deck. Each player begins with a random hand of five poker cards.

PLAY
One lot goes up for auction at a time, starting from the front of the line. Each player takes turns bidding or passing on it.

Bid: Lay a valid poker set as a bid in front of you. (The lowest bid is "High Card," a single card.) You may instead add a card or cards to your existing bid. These new cards may raise the bid to a better poker set or be a "kicker." In either case, your new bid must be the strongest bid on the table. If it is not, then you must pass.


Pass: Draw a card from the deck. You're now out of the round.

Once all but one player has passed, the player who has the strongest poker set wins the lot. If two or more players have equally strong bids, they cancel each other out and the next strongest bid wins the lot.

When you win a lot, its cards go into your tableau. The winner discards their bid cards. Anyone else returns their bid to their hands.

The hand limit is nine cards total, so at this point you must discard down to nine if necessary.

Then the next lot in line goes up for auction, following the procedures described above. This continues for each of the five lots. After the fifth lot is won, that round is over.

The game ends after one round for each player. The player with the most points wins.

CHANGES
GDofNC recommended that instead of a poker deck the game could use a Pairs deck.

If a Pairs deck, then the auction winner would be whoever plays the largest set of matching cards. If tied, whoever played the lower ranked set wins. That seemed easier than figuring out poker hands. It also makes a nice balance in a Pairs deck as more common cards are powerful as a group, but less powerful individually.

While certainly more accessible, I'm still not sure if a Pairs deck has the versatility of a poker deck though. It also means departing from this little conceit that started this whole idea in the first place. Perhaps that's one darling I should drop right away, but I'd like to give it a shot one more time.
game design lab