New Reviews and Actual Play for Do: Pilgrims of the Flying Temple 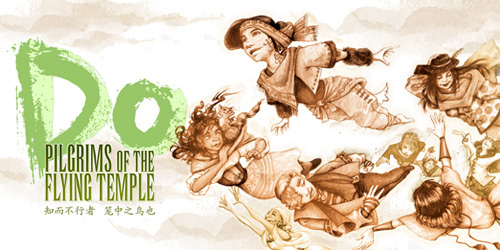 Reviews for Do are flooding in since GenCon.

MTV Geek: Lessons in Compassion and Mischief from The Flying Temple
"I soon discovered was something far more inspired than I could have possibly guessed... These letters are a really clever way to quickly pull characters into the story, with several example letters included... The system for Do is astoundingly elegant."

Tabletop Manifesto: Whale Tales to be told
"I'm just delighted to have bought a print copy. My bibliophile urges are satisfied. This is a gorgeous artefact."

Nick Bate
"The art totally captures the happily meddlesome whimsy that I love so much about this game. It's just an absolute joy to flip through... The premise of Do just makes me want to hug it... Underneath all of this loveliness, I think it's fair to say that Do is actually a really great tool for teaching people about writing stories."

[UPDATE: New review from Flames Rising!
"I like this setting; furthermore, I like the pilgrims that players take. These are heroes with enough trouble of their own to keep them busy, not to mention the troubles of the people they seek to help."]

And now for some actual play!

Dave City
"So example time: Yellow Clock, on my first turn, helped Melanie, the little girl living on the little planet inside the whale, get her house ready for the journey out of the whale. But, the troublemakers decided, my cheerful presence put her in such a good mood that she went off to play, and I ended up following her around picking up after her. Silly, yes, but sweet, I think, which is what I was looking for from Do."

The Space Turtle: Vomiting Whales and Poor, Poor Kitties
"We had a great time... lots of setting to paint the worlds and skies the pilgrims play in, and explains each bit of the game fantastically. The art is top notch, as well."
actual play do reviews