Phew! It's a busy time over here. We're moving across the country tomorrow, so I have to do a one-day-early round up of entries so far. Here's everything we've received in August as of the 30th! If you enter your game on the 31st, expect to see it in one last round up after we arrive in Durham and have internet access again. But heck, there are plenty of games to check out in this post alone, so let's get to it!

Nomad by Kirk Mitchell
Kirk describes Nomad as "a game of topographical manipulation, balance and nonviolence, inspired by geological strata, Go and other difficult games." I certainly like the materials used in his prototype! Quite lovely.

ZoxSo by David Weinstock
David enters this two-player abstract he bills as a "new ancient" game. David home-produced a run of prototypes for this game, but I let it slide past the "not-previously-published" restriction since it was such a limited run.

Tricala by Myles Wallace
Text rules for Tricala can be found here. I haven't played enough of the mancala family to really figure out the deeper strategies, so I'm curious how we'll handle a version with additional dimensions and colors. Should be interesting!


Arena of Heroes by Jeremy Southard
This is one of the few straight-up card games in the challenge. Looks like this one was already in development (even has a Kickstarter page) and tossed into this Challenge much like a gladiator into the arena. Fitting!

Hand Covers Bruise by Andy Clarke and Grethe Mitchell
This two-person team enters a game based on bluffing and guessing of raised fingers. They say, "We have tried to devised the simplest possible game." I'm surprised there aren't more entries using hands and other elements of physicality, but hey there ya go. This one will definitely be easy to prep! 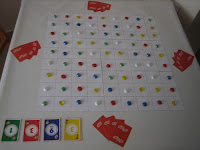 Muros by Enrique Sánchez
Enrique enters another two-player abstract, this one with lots and lots of bits n' pieces. Multi-colored stones, colors, and so forth. Curious how Megan and I are going to find enough props around the house to play, but it'll certainly be colorful! You can also find a Spanish version of the rules on his blog here. 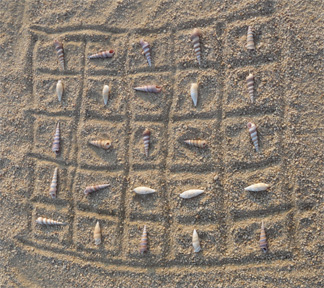 Turning Points by Joseph Kisenwether
Well, Joseph sure knows how to make a game look like it's been played for a thousand years! Take a look at those sea shells on the beach. The rules are quite minimal, which gives me some hope for emergent complexity. You can also play an online demo on the link above.

Sygo by Christian Freeling
Christian describes Sygo thusly: "Sygo is a territory game based on the Symple mechanism and Go-like capture with an 'othelloanian' flavor. It is designed to be much faster than Go, and finite, and without the ambiguities regarding life, death, multiple ko's, four-bend-in-the-corner and the like, that make its ancestor such a great game to argue about." Example Game | Playable Online

Rule of Three by Chris Sakkas
This is one of the few non-board games entered into the challenge. So far, those outliers have been very interesting variations on storytelling motifs. Chris offers some insights into his thought process in this post on the Story-Games forum. There he also links to a longer document explaining the game and an example game, too. The only document we'll use to judge is the shorter rules doc linked above.

Hunters & Haunts by C. Casey Gardner
Casey didn't just design his game, he also elaborated on the world in which the game exists. Speaking of the game's murky 1,000-year history, he drops little hints of the world of 3091 and some major historical changes between now and then.

Kickbones by Frywire, LLC
Ah, a blissfully minimal rules set! "Kick Bones is a dice game for two players. Each person starts with 25 points. Your goal is to make your opponent's points go below one (1). When it's your turn, you roll the dice. If you don't roll doubles, then you pick one die to add to your points. With the other die, you kick your opponent, and they subtract this amount from their points. If you roll doubles, then you refer to the Specials Sheet to see what you have to do! It's then your opponent's turn to roll the dice."

Flume by Mark Steere
Mark easily takes the prize for the most boastful entry into the challenge. He says, "I haven't looked at the other games in the contest, but, that being said, I'm sure they will all be obsolete in well under 100 years. Never mind 1000. Flume is here to stay, as are many of my games, which I designed for the centuries." 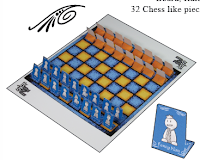 Bluffing Style Chess by Tyler Tinsley
Tyler says, "I'm entering a chess variant because the games that will last 1000 years are the games that we were playing 1000 years ago, just changed a bit by time and taste. This game is more inline with modern values then chess, you win with lies and half truth instead of planing and reason. In 1000 years I imagine this game will still be played face to face with physical pieces, the pieces just have a strange way of changing shape and color to fit whatever game you want to play. That person your face to face with, maybe they are just a projection made from the same stuff as the pieces."

Catchup
Playable Online
Catchup is an interesting stone placement game set on a hexagonal board. The quirky part of it is the conditions on which you can place one, two or three stones on your turn. It's playable against human opponents in realtime here, where the game is known as "Catchup 4.0"

Yodd
Luis describes Yodd thusly: "It's a very elegant connection/territory game with no draws. You can place stones of both colors. The object is to end up with less groups than your opponent. At the end of a turn, there must be an odd number of groups on the board. This is a very intuitive and fluid game. The odd groups restriction spices up tactics in an unexpected way, without interfering with clarity. "

Neighbors by XiFeng
XiFeng has one of the few non-board game entries to the challenge. This one is a hand gesture game in the tradition of Rock-Paper-Scissors. He says, "When Daniel Solis announced the thousand-year game design contest, I saw in it an opportunity and a challenge to design a game that could capture a few of the things that make my favorite games special, in a form that is not encumbered by technology (like video games) or expensive equipment (like change ringing)."

GUCKOY by Mark A. Tiroff
Mark enters the challenge with this game full of colorful stones on a board made of concentric rings, rays, and nodes at the intersections. As with Muros, I suspect that this may be somewhat cumbersome game to construct on our own, but perhaps the actual play experience will justify the setup.

Millennium Saga by Brian Suda
Throughout the competition, I was curious when someone would enter a game that actually takes a thousand years go play. Here comes Brian with this game. "Millennium Saga is a long term game design to draft a poem describing and spanning 1,000 years of history. The framework is to guide the participants into creating a collective work to be publicly performed as a form of oral history." Here is further background information about the thought process in designing it and his inspiration.

Hexiles by Derek Hohls
Derek enters an abstract game comprised of custom shaped tiles with abstract patterns. These tiles form a new kind of deck of universal gaming props with which you can play many new games. Like C. Casey Gardner, Derek constructs a whole backstory behind the creation of these bits n' pieces. As with the other entries that require special props, we're eager to see if the play experience justifies the prep work. 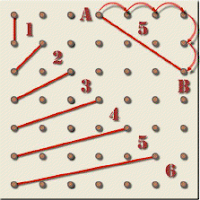 Hot Wire by Phil Leduc
Phil says of Hot Wire: "It is a simple game the requires pencil, paper and a straightedge for neatness. As long as there are study halls and long car or plane rides this game will have a niche. The game is played on a 7 x 7 grid, players connect points of the grid and try not to be the last to draw a line."

Crowns by Sovereign Games
This is one of the few (possibly only) entries that comes from a group! Sovereign Games says of Crowns, "It requires 598 words to explain (plus 307 in this little intro), but allows for more unique games than there are atoms in the observable universe (email us if you’re interested in the math). It’s a kill-the-king type game with a historical battlefield theme, and the rules are quite robust for competitive play. We like to play sets of games, best 3-of-5, to make setup strategy more impactful."
1000 Year Game Design