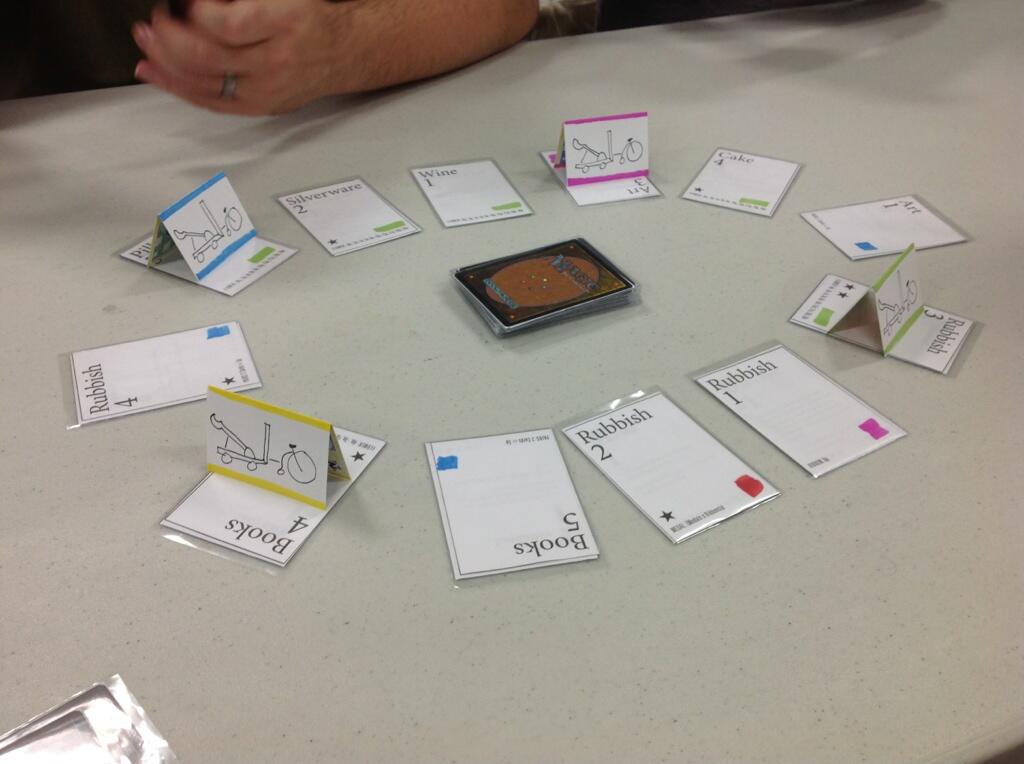 Hey, it's been a crazy-busy week but I just wanted to quickly document the results of the alpha playtests for this even crazier new game PENNY FARTHING CATAPULT. You may have seen me tweet the development for this game over Thanksgiving, but it really had a successful first playstorm session at Atomic Empire the following Monday. Here was the resulting game:

Premise
You're mannerly nobles who settle their grievances in the time-honored tradition of dueling with catapults attached to old-timey penny farthing bicycles. These contraptions are so rickety and poorly engineered that when you launch your catapult, you get pushed backward an equal distance!

Goal
Your goal is to have the highest score by collecting valuable trinkets that get launched during the duel.


The Deck
The deck is comprised of fifty cards in ten suits with five sequential ranks in each suit. The suits are things like "Rubbish," or "Pillows," or "Silverware."


Set Up
Shuffle the deck and arrange a circular track of fourteen cards in the middle of the play area. Arrange each player's catapult as equidistant from each other on the board as possible, the youngest player placing first. Deal four cards to each player's hand.

LAUNCH: Play a card from your hand to launch your catapult. The distance of your launch is indicated by the rank of your played card. So, if you play a "4," your distance is four spaces. You may launch at either direction of the track.

COLLECT: Collect the card on the track and replace it with your played card. Cards in your collection are kept face-up.

MOVE: Then move your catapult in the opposite direction that many spaces along the track.

After launching, you might HIT: If you hit a space occupied other players' catapults, they must discard a card of their choice from their own collection. This makes it useful to keep some low-value cards in your collection as a shield to protect your treasures.

END: End your turn by drawing a card from the deck.

Continue playing until everyone has played their entire hand of cards. Your score is the lowest rank of each suit in your collection added together. Thus, low-value cards are useful as shields, but they might potentially lower your endgame score. Be careful about what you collect!
card game penny farthing catapult