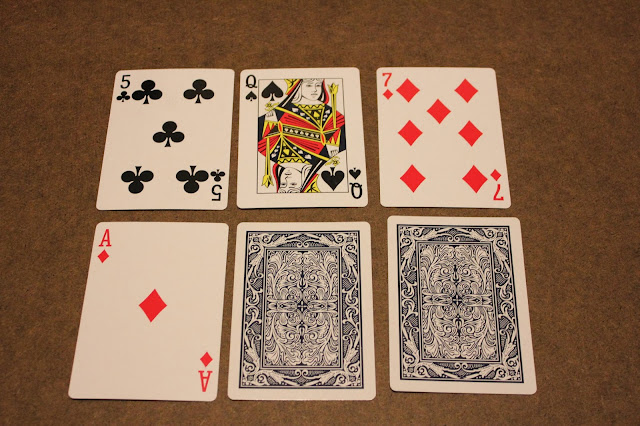 Here's a game that originally appeared in the Summer 2013 issue of Casual Game Insider.

It's an exploration of the basic half-blind drafting mechanic that I tinkered with earlier this year for Princess Bride's poison cup mechanic, which in turn was inspired by Antoine Bauza's two-player variant of the Little Prince: Make Me a Planet. You may also notice some familiar turn-order mechanics that I would later use in Nine Lives.

This game was paired with an article about how to present a choice between chaos and order to make an approachable filler game.


ROYAL DRAFT
This simple drafting game has players present chaos/order choices to each other. It requires a standard deck of playing cards with one joker. It takes two to five players and lasts about ten minutes. The goal is to score the most points. It’s quick enough that can be played multiple times with scores tallied across all plays.


Setup
Remove the four kings and the joker from the deck. Shuffle and deal one to each player face-up. If no one got a Joker, discard it from play. Shuffle the remaining kings into the rest of the deck and set it down in the center of the play area within reach of all players. Each player should have enough room for a row of up to ten cards. Use poker chips or a notepad to keep track of score.

Preparing Each Round
Play is divided into rounds. Each round, one player takes the role of Dealer. In the first round, the player with the highest ranked king is the Dealer. Thereafter, the role of Dealer will pass amongst players according to their choices during play.

To start each round, the Dealer draws one card per player, plus two, from the deck.


The Dealer places two of these cards face-down in the center of the play area, then places the remaining cards face-up alongside the face-down cards. These cards are collectively called “the offer.” 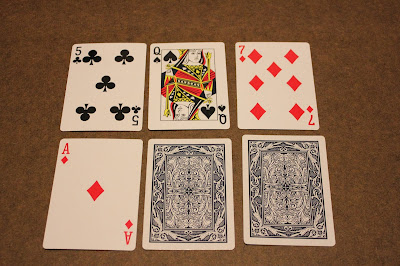 Turn Order
Now players take turns. In the first round, the player with the Joker or lowest-ranked king takes the first turn. The player with the next highest ranked king takes the next turn, and so on, until the dealer takes his turn, thus ending the round. In future rounds, turn order will change based on player’s choices during play as explained below.

Busting: If the active player has taken an odd-numbered card and there are two face-up odd-numbered cards already in her collection, she must turn those two cards face-down. The newly added card remains face-up. Note that this only applies to numbered cards. Aces, Jacks and Kings are fine.


Dealer’s Privilege: Though the dealer gets last pick, he takes two cards from the offer. The Dealer decides the order in which they are placed in his collection.


End of Round
There is one card remaining in the offer after everyone has had their turn. This is discarded from play, ending the round.


New Round, New Dealer, New Turn Order
Each round, the player who took the highest ranked card in the prior round is the new dealer. Thus, the turn order is also rearranged so that whoever took the lowest card will get first pick, followed by the player who took the next highest card, and so on. (Strategy Note: Each turn, you face a choice of whether you want best pick of the offer or the option to take two cards as the dealer.)


Endgame
The game ends when one player has nine or more cards in her collection.

Joker Score: If you have the Joker, score 2 points for each face-down card in your collection.

Set Score: A continuous row of cards with a matching suit or rank, scores 1 point per card in that set.


Example of Scoring
At the end of the game, your collection has the following cards, in this order. 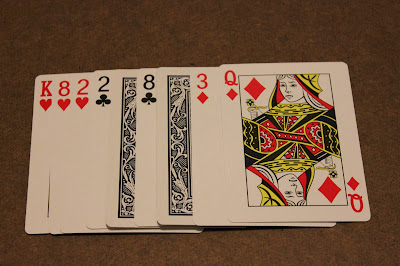 Joker Score: You don’t have a Joker in your collection, so you don’t score any points for your face-down cards. (If you did, your two face-down cards would score 4 points.)