The Time-to-Point Ratio in Splendor 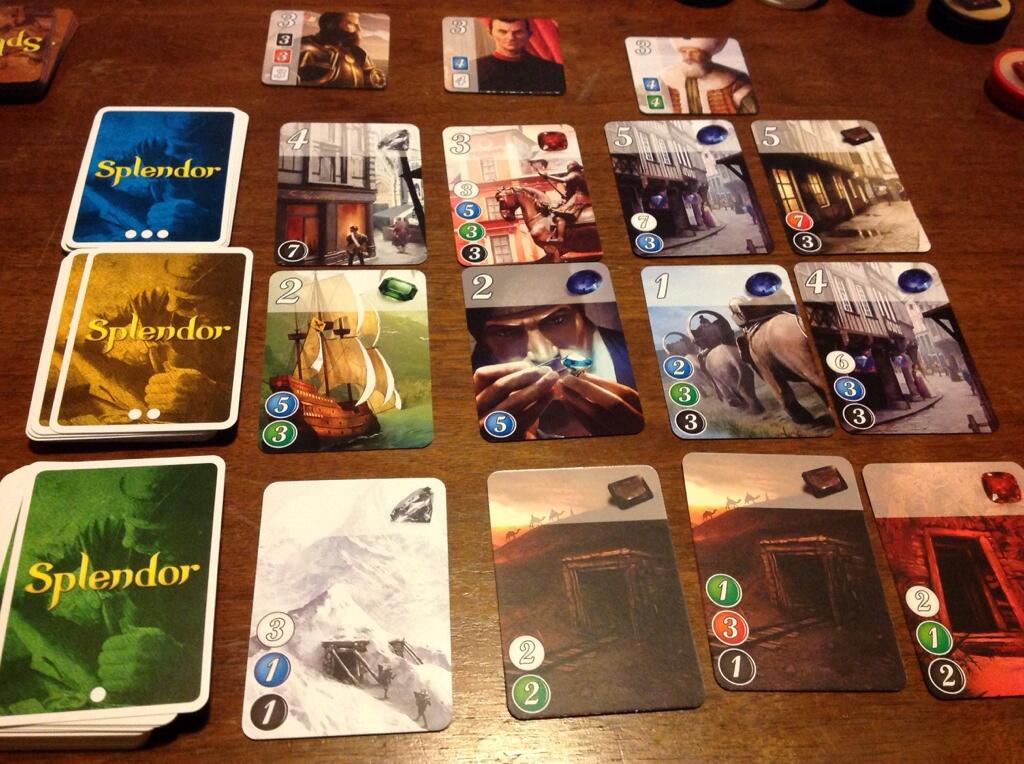 Yesterday I introduced the Time-to-Point Ratio using Lords of Waterdeep as an example, but the game that really made the concept clear to me was the new game Splendor from designer Marc Andre and publisher Space Cowboys. First, I must just say I love this game. It's an elegant engine-building race to 15 points. Here's a good tutorial of how to play.

Usually whoever reaches 15 points wins, though there is a chance of any close stragglers catching up on their last turn. Because there is no hard limit on the number of rounds like in Waterdeep, Splendor is a little trickier to reverse-engineer. Fortunately all the cards have been structured in a very regular cost-to-reward structure, which can be converted to this basic rule of thumb:

Each card requires a number of turns equal to its cost.


The whole game is built around breaking that rule, compelling you to build an engine that lets you to buy cards faster, more cheaply, for greater reward, or simply removing them from the market so an opponent can't take them. So let's look at the cards you can buy and their relative costs.

Usually, costs are structured so that every card costs a resource matching another card's color. For example, in the cheapest cards: Red costs White, White costs Blue, Blue costs Black, Black costs Green, Green costs Red. These patterns vary, but within each reward-category, a five-pointed cycle is always embedded in the cost structure. 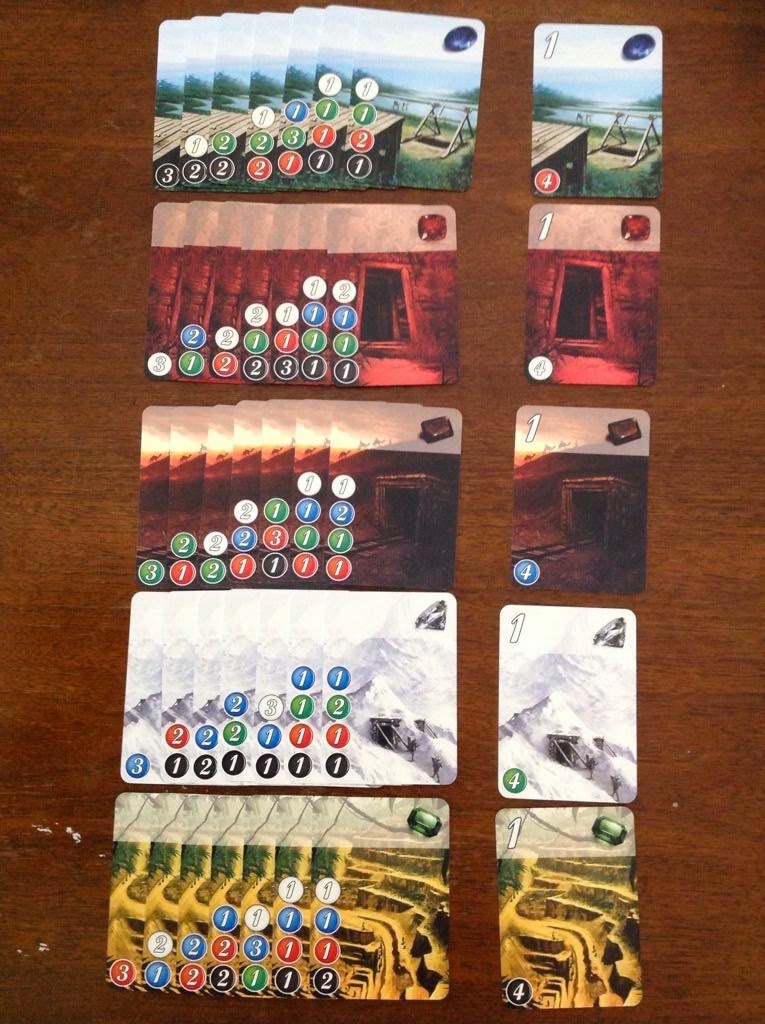 First Level Ratios
These cards are the most varied in cost and can fundamentally shape the engine you'll end up with at the beginning of the game. All of them take at least two turns to save up for and buy. They run the gamut from super-cheap to absurdly over-priced, but because every card will usually not come into play, sometimes you've no choice but to take the sub-optimal option. 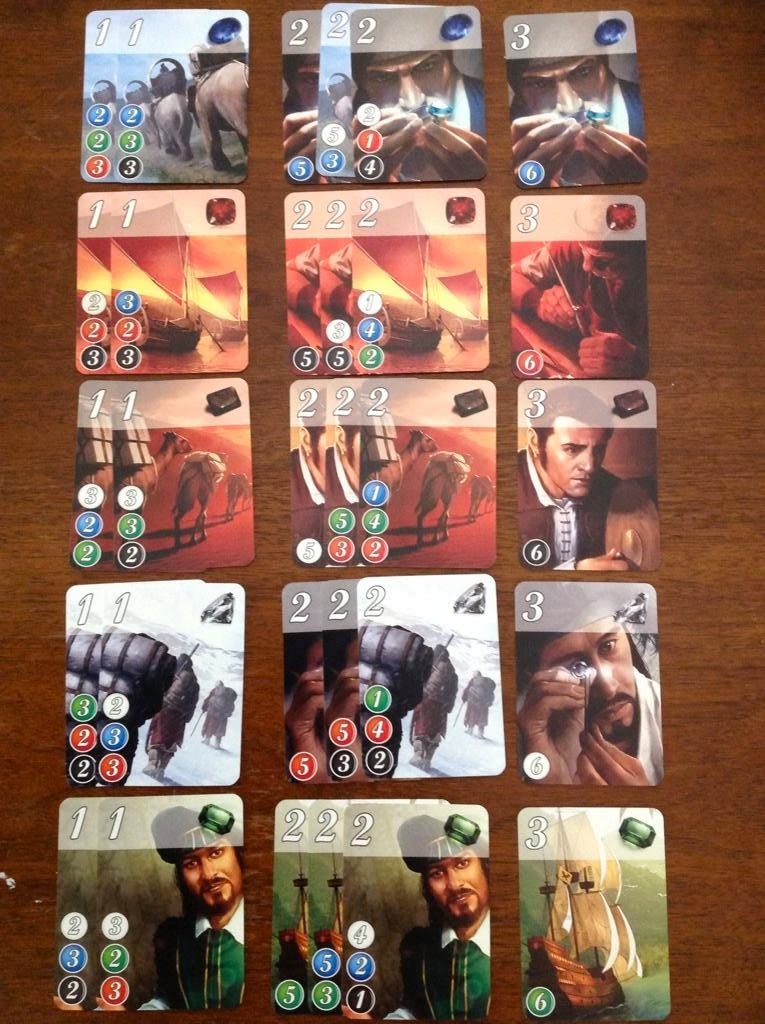 Second Level Ratios
Beyond first-level, it's a little trickier to figure out the time-to-point ratio of each card since technically these might take only one turn to buy, if you've built up your engine well and the cards have come out in your favor. The ratios above are based on the default game state at the start of play, before building your engine and assuming you are able to take two chips at a time on your turn every turn. 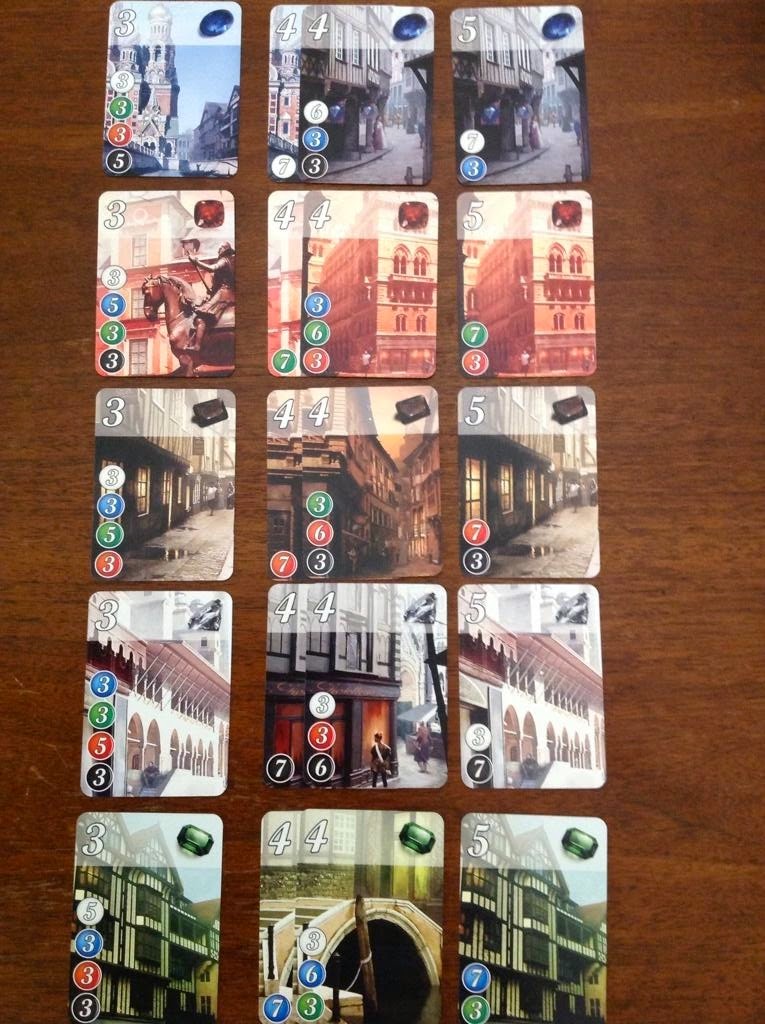 Third Level Ratios
These cards are priced under the assumption that you've already built a sizable engine to spend as little as possible for the most points. In some cases, like a two-player game, it would be impossible to afford a 7-cost card without and engine already built. There just isn't enough basic currency.

It's also clear now that costs with as few types of colors are best, especially if they're even numbers. 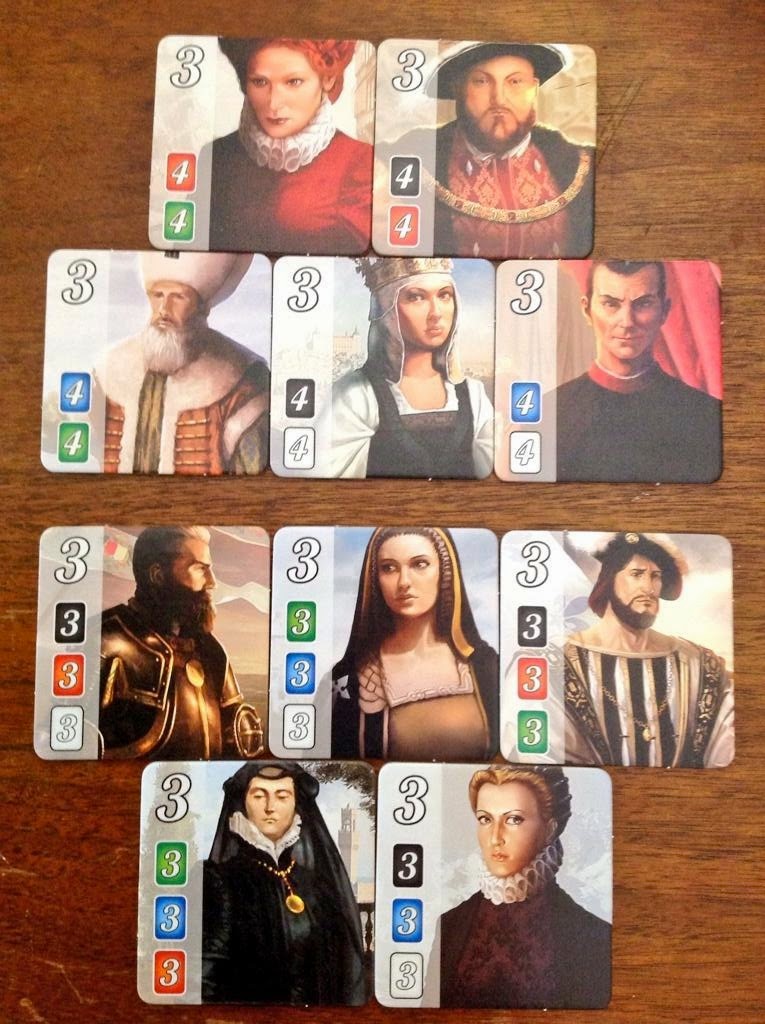 Noble Ratios
Nobles are odd in that they are based on how many cards you've purchased, putting them one further degree of separation from the baseline economy. I do find it interesting that they all give the same reward, though. This might be a mercy to the players since calculating variable cost and variable reward at this level would be too much of a brain-burner.

Design Takeaways
Splendor uses very regimented costs and rewards throughout the card deck, to the extent that there is a five-pointed web dictating that X-color card will always cost Y-color of resource. It's a great example of how to begin with a crystalline distribution, then use the vagaries of random draws and engine-building to add lots of texture. It's a fantastic game and a wonderful design. Bravo, Marc André!
game design