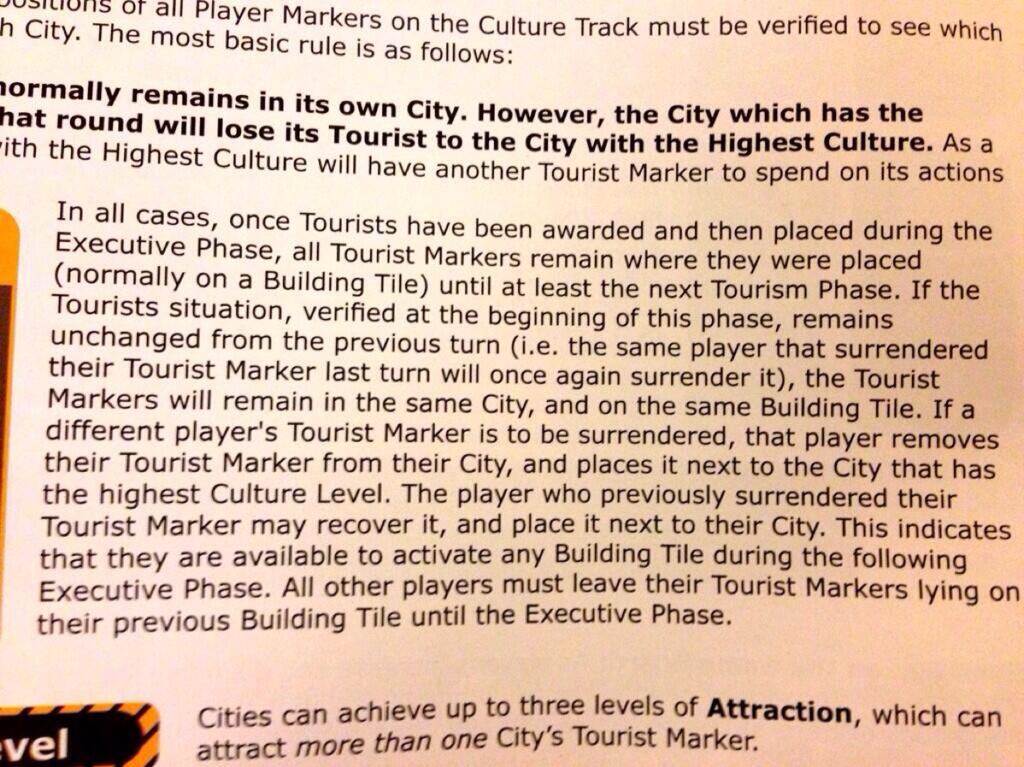 Back in March, Chris Kirkman shared this photo of a paragraph from the rules of the Capitals:


Whew! What a mouthful. Clearly this paragraph could've used some more breaks and a section header to make it more digestible. This led to my own brief bit of advice, with further elaboration I'll share now.


There are plenty of other tips out there. In my case, I'd have to really look hard at a paragraph that long and dense to question whether the rule it explains is worth the word count. But assuming it is worth it, then starting with these three tips alone, the paragraph above becomes much more readable.

Moving Tourist Markers
Once Tourists are awarded and placed during the Executive Phase, all Tourist Markers stay in place until at least the next Tourism Phase.

All other players must leave their Tourist Markers lying on their previous Building Tile until the Executive Phase.


First, I start off with a header that briefly encapsulates the idea that will be presented in this section.

Note the alternating use of gendered pronouns in the third paragraph. When I talk about two or more players in a piece of text, I use alternating pronouns to distinguish them more clearly. In this case, the first player is noted by "she" and the second player by "he."

In all cases, I also switched to a more active voice in the present tense. Instead of "have been," I used "are." This puts the rules in the now, while the pieces and bits are at the table in front of the players.

If you simply must include such a large unbroken paragraph, at least give a short version to start things off. Ken Tidwell gamely provides one here:

If there's no new tourist, leave things as they are. Otherwise, move in the new tourist and send the old one home.


Nice work! For more general rules tips, I really recommend seeing the responses to my original tweet. There is some fine advice there.
game design writing