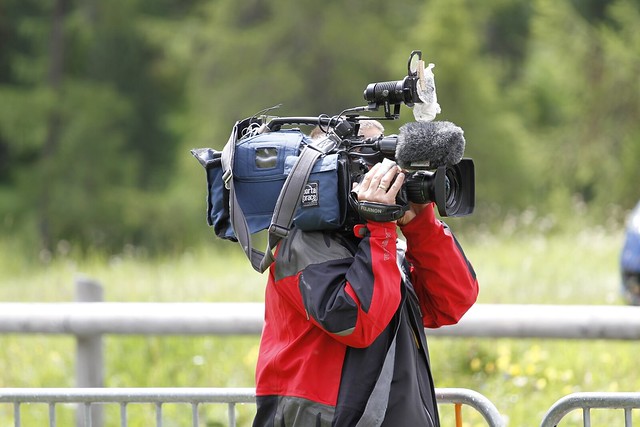 I've been noodling a push-your-luck game themed around investigative journalism for a while now. At first I was exploring a reverse-auction mechanic, but the push-your-luck aspect of Circus Flohcati, Incan Gold, Dead Man's Draw, and Abyss seemed to make more sense. The idea of "digging" into the deck as a mechaphor of investigation sounded really compelling. I also really love games where the only prep you have to do is shuffling one deck of cards.

Here are the basic ideas I have right now, which haven't entirely gelled yet into a real game, but are close enough to get to the table by next week. 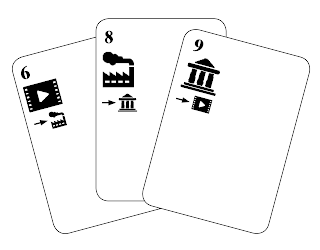 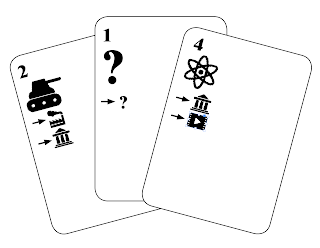 Cards have ranks and suits, noted by the number and large symbol along the top corner. Each suit represents different subjects your reporter is following.

Below the suit is a little arrow pointing at another suit. Lower ranks have more arrows than higher ranks. 1s are "?" and have an arrow pointing to "?"


Shuffle the deck. Deal one card to each player's hand. Discard ten cards to the discard pile face-up.

Each player begins with 0 points, 10 Credibility, and 5 Money.

On your turn, you'll dig: Reveal a card from the deck and place it in the center of the play area. Then you must decide whether you'll stop or keep digging.

At the end of your turn, you may file a report. Lay down a set of cards from your hand in front of you. Reports are either open or closed.
When you file, you may discard 1 Money to fill in any missing connections. The next time you do this costs 2 Money. The next time after that costs 3 Money, and so on.

"?" may be used to fill any missing connections for free.

Keep your filed reports separate from one another, face-up so everyone else can see them.

This ends your turn. The next player begins their turn as noted above. Each player must dig at least once on their turn before deciding to stop.

This is just a quick list of possible suits, their actions, and their penalties. Nothing final, just something to test at the table ASAP. In all cases, the "__" in actions is the number of cards in the play area.

Entertainment: Take __ cards from the top of the discard pile. Penalty: Discard __/2 cards from your hand.

International: Discard up to __/2 cards from your hand to gain that much Credibility. Penalty: Discard __ Money.

Local: Discard up to __/2 cards from your hand, then take that many cards from the top of the deck into your hand. Penalty: Discard __ Money.

Rumor: Add __ cards from your hand to any of your filed reports. Penalty: Discard __/2 Credibility.

I'm sure there are other subjects that would fit in this list and these subjects could have more thematic effects. That's it for now though.

When the deck runs out, the game is over. 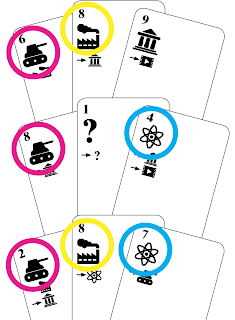 At the end of the game, you get bonus points for doggedly reporting on the same subjects over and over again. For each suit appearing on more than one of your reports, score the highest rank in that series. In the example above, you reported on War three times, the highest rank of which is 8, so you score 8 points.

Whoever has the most Credibility doubles their point total.

The player with the most points at the end of the game is the winner.

I like the idea of two competing strategies being equally valid: File fewer reports while relying on your Credibility to carry you through - OR - Spend a bunch of money filing shoddy reports aiming for an insurmountably high score, regardless of your Credibility.
lab