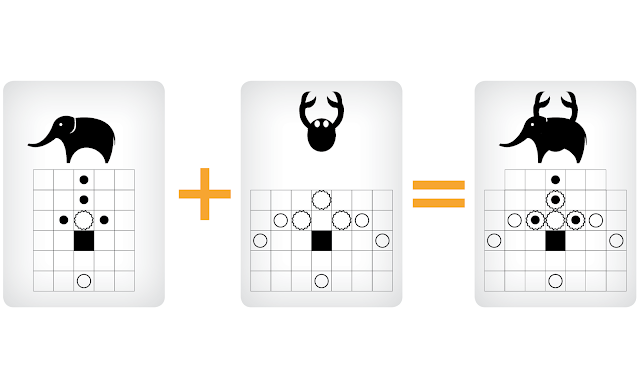 2-player abstracts are really hard to make commercially viable, but that's never kept me from noodling them a bit. This is one idea that I've had on the back burner for a long time while I was focused on card games, but I'm pushing it forward a bit now that Onitama and the Duke are more prominent.

The basic idea is using transparent cards like Gloom or Mystic Vale with an abstract movement UI as seen in Onitama, the Duke, and Tash-Kalar. Each player has identical set of unique pieces. Call them A, B, C, D, and E.

To set up the game, each player draws five cards from the deck. Each player simultaneously secretly picks then reveals a card to assign to each type of piece. In the above example, player 1 picked Elephant and player 2 picked Crab. For this game, A has the traits and powers of Elephant and Crab. Then you do the same for B, C, D, and E.

Then you play the remainder of the game using those movement rules. I'm imagining the game played on a 9x9 board, I can playtest on the lines and vertices of a normal chess board.

The goal of the game is to score three points. If you begin your turn with one of your pieces on your opponent's center space on their home row, you score three points and win the game immediately. Most of the rest of their home row scores 2 points. The corners of the home row scores 1 point. So you could be aggressive and aim for your opponent's heart or do a more controlled overwhelming push.
lab