Belle of the Ball - Second Edition Rulebook and Errata Feedback 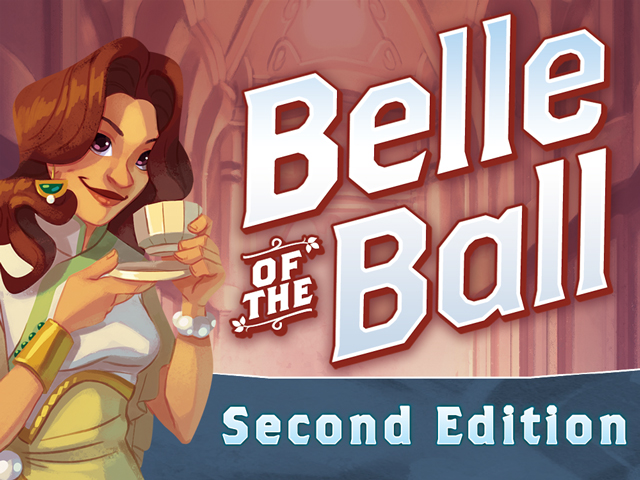 Hello party people! I'm happy to show you the Belle of the Ball second edition rulebook and some of the card errata. We wanted to get public feedback before going to print, especially from fans and owners of the original edition.

Here's a link to the rulebook for your review.

I'll keep that PDF updated as folks find typos or errors. We're looking for feedback before August 19, 2016 ideally. There's a teeny bit of wiggle room on that deadline, but not much.

In the basic game, start each player with one random Belle card.
Swap step 1 and 2 so players can use a Belle card on the same turn it was acquired. No more waiting a full round to use it.

Remove step 3. Instead, your group scores immediately when it is full, even if it’s not your turn. This might clean up a few of the awkward bits of explanation for new players. Now it’s clear that if it’s on the table, it can be added to. This also is more merciful to players who get a full group before it’s their turn when the game ends.

The rules now state that a county power is used as if it were a Belle card, during step 2 of a players’ turn.

5-player rules are now incorporated into the standard and advanced game modes, not as a separate variant.

For detailed errata list and changes to the cards, see the live doc at the link below.

Indigum:
CHANGE: Use this power as a substitute for spending one regret.
TO: Take a guest card from the top of the deck. Turn it face-down. It is now a regret in your supply.

The Belle seems to be Everywhere
CHANGE: Add this card to an opponent’s group.
TO: Discard this card from your hand.

The Belle Welcomes the Lords
ADD TO END: (Lords have “Lord” in their name and have a blue background.)

The Belle Welcomes the Ladies
ADD TO END: (Ladies have “Lady” in their name and have a purple background.)

The Belle slips a VIP Pass
DELETE: This counts as your invitation.

The Belle finds a Secret Entrance
DELETE: This counts as your invitation.

The Belle is feeling Rushed
ADD TO END: (Full groups are scored at the end of their owners’ turn.)

The Bell says Vive la Difference!
CHANGE: Difference
TO: Différence
ADD TO END: (In other words, score 1 point for each unique icon in this group.)
belle of the ball