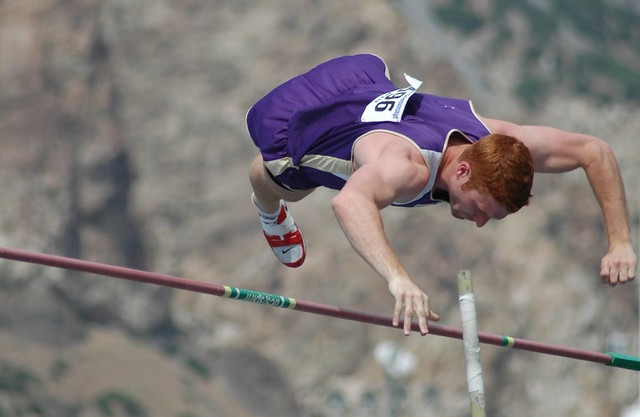 It's Olympics season and I've been particularly fascinated with the game design behind the rules and formats for each sport. Here are some quick notes about how they might translate if they were rules for a tabletop game.

Modern Pentathlon has a fencing round where the lowest ranked fencer duels the second-lowest. Whoever wins moves on to duel the next lowest. This continues with the winner of each duel climbing the ranks and the loser being removed from that round and earning points accordingly. I could see a Magic: the Gathering tournament being formatted like this as a casual event.

Miss and Out Cycling has a large group of cyclists on a track doing laps around the course, but the last cyclist to cross the finish line is eliminated from that race. Laps continue in this manner, with more cyclists being eliminated. This is more or less how Get Bit works, replacing individual racers with 5 hit points for each player.

Olympic Diving has 7 scores from judges kept separate from one another, then the highest and lowest two scores are ignored, the remaining scores are multiplied by the difficulty level. It's a bit convoluted, but I could see something like this in an early Euro sort of game.

Volleyball has an interesting combination of racing mechanics and tennis victory. There are some variations, but generally each round of play may only end after a team has X points. Once a team has a point difference of Y points over their opponent, they win the round. This might lead to some extended games at the table, but I'd love to see a 2p abstract formatted like this.

Pole Vault has a classic push-your-luck mechanism. The difficulty is raised (literally) throughout the game, then players must decide to pass or attempt the vault. Three missed attempts eliminates the player. This reminds me a lot of Welcome to the Dungeon, but it might work with any push-your-luck tabletop game.

Cool stuff! Any other Olympics games you think might translate to tabletop mechanisms?
game design lab