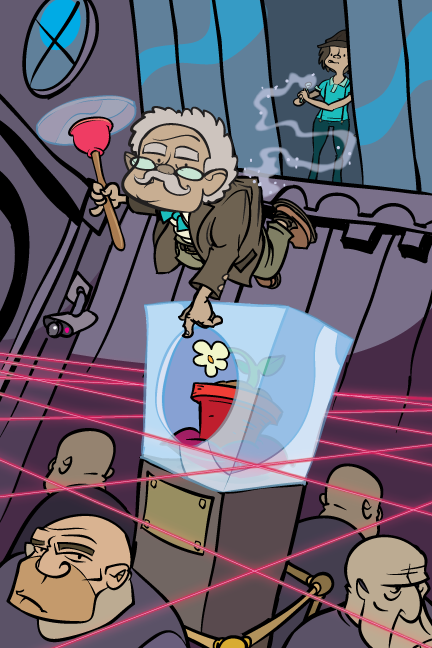 Thanks to Evil Hat Productions, we have a bit of an art budget to hire James Stowe again to create more art for Pop and Locke's Last Heist. The one thing I really wanted to see (as did many others) was Pop and Locke actually pulling a heist. Here is my actual art direction to James.

I want to show Pop and Locke actually in a trouble during a heist. The game mechanics require you to incur a degree of trouble in order to achieve the best ending. However, most heist movies reflect these troubles with violence, showing heroes pinned down and exchanging gunfire. For example.

That's not how Pop and Locke work. After all, part of their advantage is that they are an unlikely heist team. Pop, Locke, and the Target all have access to the weirdly powered Objects, which usually make traditional weaponry impractical. Instead, the Targets use a combination of high-tech surveillance and hired goons to protect their treasures. Meanwhile, Pop and Locke use their Objects' powers to pull off their heists. So, what does that leave for heist scenes? Quite, a bit, actually!

Descend on a wire and harness above the target
Reveal the surveillance beams
Distract the dogs!
Cut through the fence!
Disable the alarm!
Avoid the cameras!
Pickpocket the key!
Carry the heavy box out!
Keep the drill running!
Find the passcode!
Convince her to give me the passcode!
Get his cellphone!
Find the blueprints!
Discover the hidden exhaust port!
Blow that popsicle stand!
Control your partner!
Wear a ridiculous disguise!
Mark the gold!
Loop the camera feed
Cut through the glass
Replace the (statue, diamonds, artwork, launchcodes...) with a fake
Vault over the pressure plate
Pop out of the dusty old crate
Decode the warning in an ancient language
Pop the gems from their setting
Slip the papers inside an ordinary book
Guess the password
Hide behind the set of armour
Roll under the descending security gate
Hit the target with the grapple gun
Photograph the contents of the safe
Plant false evidence

I'd love to see Pop and Locke in the middle of any of these situations, take your pick. Some stuff I would like to see for sure:

* Dramatic perspective, just to get that nice cinematic feel.

* Pop and Locke pursued or caught by goons. Generic goons, like old-timey 60s Batman henchmen. You can even draw them as an indistinct mob of silhouettes, just to keep the details on our heroes.

* Pop has captured the Object they were trying to steal, but it's ridiculously oversized for his body. What's a large household object? A recliner? A potted plant? Hm! A plant. Try that.

* Locke using a spoon to levitate something out of the way, a goon or a door or an obstacle.

I put together this Pinterest board for heist reference, which I think was immensely helpful, especially getting across the look for goons.

So that's the direction I gave a few weeks ago. Then James comes back with this finished piece that somehow manages to incorporate SO MANY elements of what make this game unique. It's clearly a heist, pulled by unlikely heisters, with obviously magical stuff going on, all to steal a potted plant, which for some reason is guarded by cartoonish goons and a laser grid. It's all in there and I love it so. Excellent work, James!
art pop n' locke