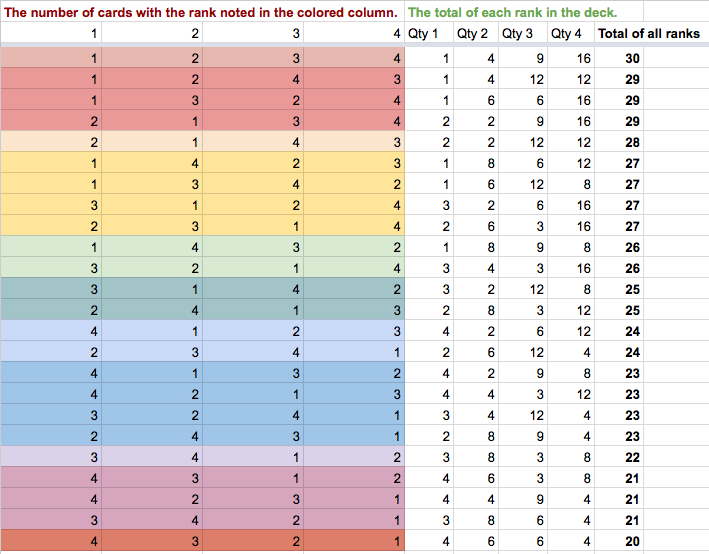 A few weeks ago, I was geeking out about multi-triangular deck distributions and noted that I was a little bugged that I didn't go through every possible combinatorial permutation of triangular decks ranked 1-4. Well, here it is, and there are some curious findings.

Let me back up a bit. This spreadsheet outlines several "triangle" decks, which are typically a deck of cards in which each card is ranked with a number. That number is also how frequent that card is in the deck. So there are one 1, two 2s, three 3s, four 4s in the deck. The top row of numbers is the frequency, the colored rows below that are the ranks. A typical 1-4 triangle deck is noted on the first colored row.

The white section to the right is the sum of all ranks. First, multiplying their frequency by their rank, then totalling up all those products into one grand total.

Now, why would this be useful? In my case, I wanted to figure out a resource deck for Monsoon Market. I wanted each resource to only occupy ten cards in the deck, but their ranks to be distributed in a somewhat triangular fashion, to vary their overall rarity.

Now it's very easy to get lost in the weeds with this kind of obsession. I guarantee you that no one but the most die hard card-counter will bother calculating these totals. In fact, I could just as easily make every resource follow a standard triangle distribution just to make it easier for everybody to figure out. And I might! But this kind of fiddling is still good to have done at least once.
game design