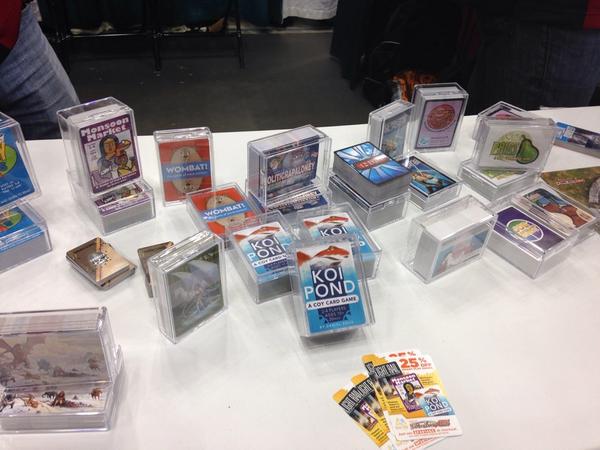 Every month, I share my print-on-demand sales numbers so you can keep track of my year long experiment releasing one new game each month of 2014.

The Bad News, Good News
This was an odd month because it's the first this year in which my freelance obligations forced me to miss a release deadline. I also incurred some steep expenses hiring an artist for a future release and ordering inventory for the upcoming local convention tiltEXPO.

However, these unfortunate setbacks were greatly mitigated by the joint promotional push by DriveThruCards at Gen Con and me from home on social media. On top of that, the Chinese edition of Koi Pond is far into production and the Brazilian edition of Light Rail is quickly gaining steam.

Let's look at the numbers!

Two MVPs Carry the Team
You recall last month how my skepticism about promotions was totally thwomped, right? Well, consider it double-thwomped because August performed very well. All credit to DriveThruCards' aggressive 25% discount code. In the numbers below, you'll have to disregard my own purchases, which do figure into the sales numbers but not into the earnings numbers.

The top sellers this month were easily Light Rail and Monsoon Market, both showed significant growth while the rest of the catalog dropped a bit. I suspect Light Rail's small price point and low card count helped it become an impulse buy. It may have been an add-on purchase for anyone who bought Monsoon Market or Koi Pond to save on shipping.

Next month will see the release of Solar Senate, closely followed by Kigi so I can get back on schedule. Hopefully the good times continue!