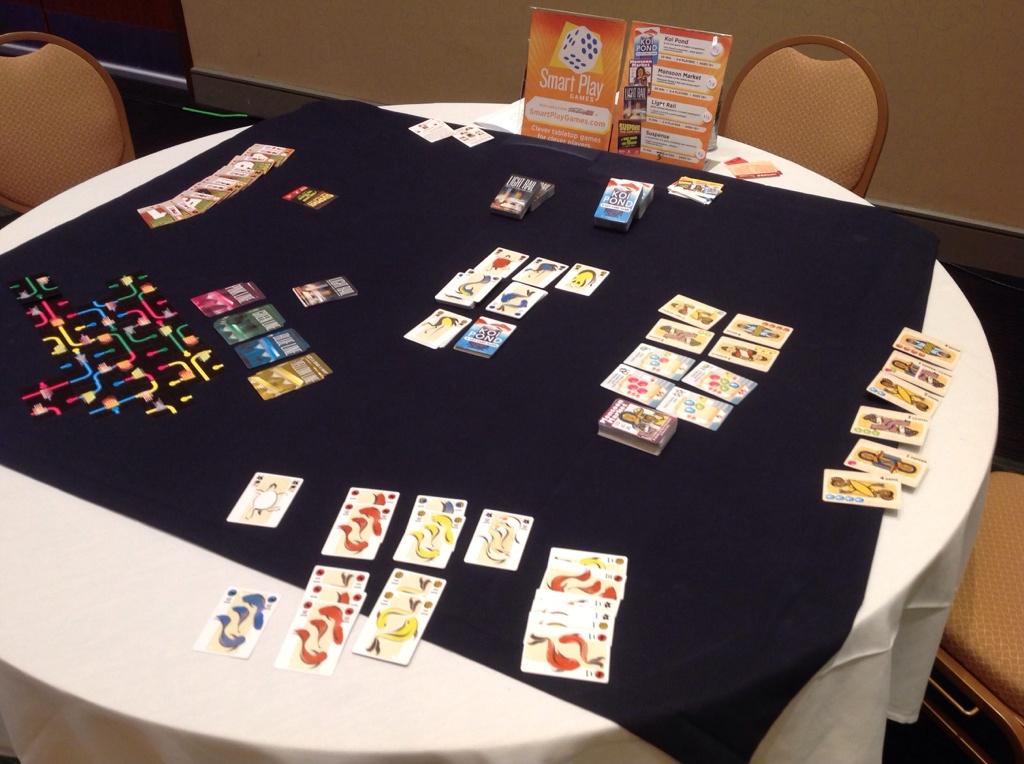 This weekend I ran a table at the inaugural tiltEXPO in downtown Durham, primarily a video game show. It's my first experience running my own table for my own card games. I have a bit of experience volunteering at other booths at tabletop conventions or sharing a table at video game conventions, but this was my first solo show. Here was my mental flowchart/script:

"Howdy! Feel free to take a look at any of my card games. I'm running demos all weekend."

Pause for response. If they stick around or ask about anything in particular, proceed to a fast, clear pitch. Direct attention with body language and eye contact. Remember, you're competing with the Smash Bros tournament right next to you:


"Monsoon Market is a fast-paced economic-themed game where you're trying to get rich fast. Magic players like it because there is a lot of opportunistic combo play." (Add a line about the historical context if they seem interested.)

"Koi Pond is a competitive game where your interaction is more "passive" aggressive. (This usually gets a laugh.) You have simple choices but tough decisions as you manage your resources and gauge your opponent's strategy."

"Light Rail is a colorful path-building game where you're making the transit lines in a futuristic city. It's very popular with mixed groups of casual players just getting into tabletop."

"Ah, SUSPENSE is a special one. It's only 13 cards but it's actually my most challenging game. Hardcore gamers love it for the fast, fierce bluffing and deduction." (This was the easiest sell of the con and I should have brought more copies.)

Pause for response between each pitch or proceed to the next. If they look uninterested, offer an easy and friendly exit:


"And I have plenty more games always available on my site at SmartPlayGames.com. Here's a card! Come back any time!"

If they express interest, offer a seat and run a quick demo. Emphasis on quick, under 2 minutes. Have the table already set up for a mid-game example to cover the important ideas of play. Close with the following:


"And that's it! Like all my games, ____ is designed to be very easy to teach and learn, but there is always a deeper strategy underneath so you get lots of replay value."

If a game was out of stock, I'd offer a discount code for online orders. Otherwise...


"Yes, accept credit cards! Come back any time if you want a more thorough tutorial. I also have video tutorials on youtube."


I repeated this script many times over the weekend until my voice was pretty much shot by Sunday, but I did manage to sell out of Suspense and Monsoon Market, and almost sell out of Koi Pond and Light Rail. Overall I'd call it a successful debut!
business escapistexpo tiltexpo