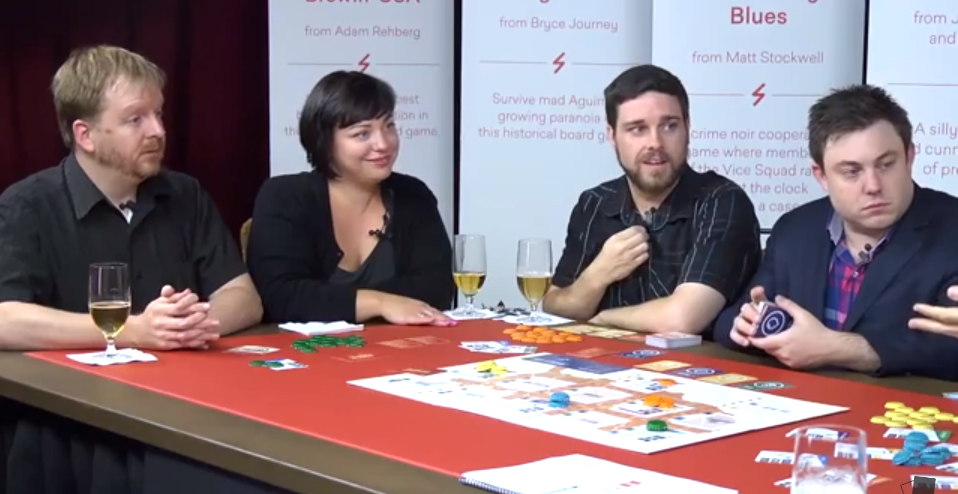 I've been watching season two of Tabletop Deathmatch with avid interest. The production values, presentation, and overall organization is light-years past season one. (And season one was pretty good!) To recap: Tabletop Deathmatch is a reality show competition held by Cards Against Humanity and its business partners to find the next great tabletop game.

The first eight episodes this season focused on introducing and teaching each game in the contest. No judging, just tutorial. This bit was fun to watch for general interest, but I was much more eager to see the subsequent evaluation by a team of top industry judges. So far only four of these judging episodes have been released, but each has offered extremely useful advice for any beginning designer.

Here are five lessons I've pulled out so far, in no particular order.


Present the game you have on the table right now.
Not the game it could be or the game it used to be. If you've worked on a game a while, it's no doubt gone through dozens of iterations and you've considered a hundreds more future revisions. Regardless, mentioning all of those while teaching, let alone pitching, just muddies the presentation.

Know your game's weight and set accurate expectations.
Despite easy rules, there may still be emergent analysis paralysis. I run into this problem too frequently. Because I avoid violent or horror themes in my games, I tend to use nature or cute animals, which in turn seems to imply far lighter games than I typically design. Don't pitch "a light social casual game" when you really have a quiet, contemplative strategy game.

Listen, learn, but remember you know your game better than they do.
It's easy to get intimidated pitching to a veteran games-person, especially if they start calling out mechanics they recognize from other games. That intimidation can turn into defensiveness and perhaps even combativeness. That's no fun for anybody involved. Just remember a 2-minute pitch isn't an ideal presentation scenario for many great games, and even industry vets struggle to explain their games succinctly and accurately.

Public information slows down decisions. Decisions slow down a pitch.
This is more of a general rule of thumb when you're trying to present a game very quickly. Everyone has their own cognitive horizon past which they won't bother analyzing. However, visible information tempts many competitive players to push against their horizon so they can make the "right" decision. Even in a demo! Try framing your pitch so you minimize the decision-time. Spend that time actually explaining the game, rather than waiting for a newcomer to make an informed choice.

"Failure" in a game should make you excited to play again.
At no point should a "fail" state mean that someone doesn't get to actually play the game. "Lose a turn" is basically a cardinal sin in game design. Look at "success" and "failure" as forks in a road, not a traffic light. Either outcome should push the game forward.


Those are just a few little tidbits I've pulled from the show so far. What have you learned?
business game design