A Trick-Taking Game without Numbers 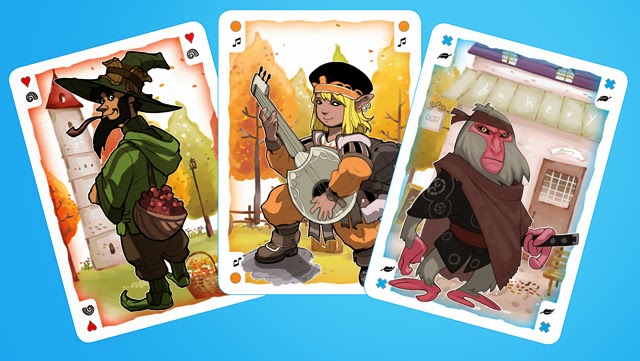 [UPDATE MARCH 17, 2015: The draft below is saved for posterity. If you want to playtest the current iteration of Trickster: Fantasy, check out this post for details.]

Here's a quick outline of a trick-taking game using cards that have no numbers. This takes a bit of mechanical inspiration from Niya, Set, Iota, Little Devils, and an old military drinking game. Many thanks to Stephanie Straw for kicking the cobwebs off this old idea. It's been clunking around in the back-burner for a while and it will finally reach the testing table soon.

Setup: Each player drafts a hand of 7 cards using the pick-and-pass method from 7 Wonders or Sushi Go. Remaining cards are set aside and won't be used during the game. The owner of the game takes the first turn in the first round. Turns proceed clockwise around the table.

Goal: Own the fewest cards by the time any player has emptied their hand.

Playing Rounds:
The start player of the round may play any card from his hand.

The next player may play any card from her hand.

The third and any subsequent players must follow the same pattern that the second player established with her card:


If a player can’t fit the pattern, he must collect all cards played so far this round. They're kept face-down in front of him.

If turns go all the way around back to the start player and all players have fit the pattern, then the second player must collect all cards played so far.

A new round begins with the collector from the prior round as the start player.

End of Game: Continue playing until one or more players end the round with an empty hand. Whoever has the fewest total cards in their collection and in hand is the winner.
card game lab trickster