Titles and Counties of Ludobel Isle [Belle of the Ball] 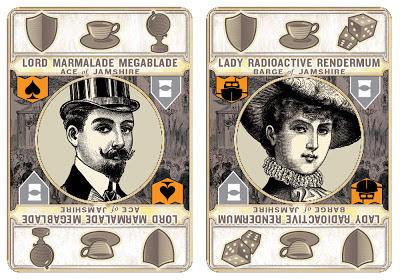 I'm fleshing out the back story for some aspects of the world of Belle of the Ball. Specifically the title for each character and their county of origin. For example, Lord Marmalade Megablade is the Ace of Jamshire and Lady Radioactive Rendermum is the Barge of Jamshire.

All the titles/counties are silly things like that, but they're distributed very deliberately through the deck. For example, each county only has one Lord and one Lady. Each county has only five guests. Each title only appears three times through the deck, so not every county has every title.

I embedded this supplemental information in the guest cards for use in later expansions, but they're also useful for art direction. Of course, that means the titles have to actually mean something. Any things you imagine would be true of these titles and countries, just by the sound of their name?

I have my own ideas of course, but I'm curious about your word association response.