Turn Undead, or "A Zombie Game I Don't Want to Make" 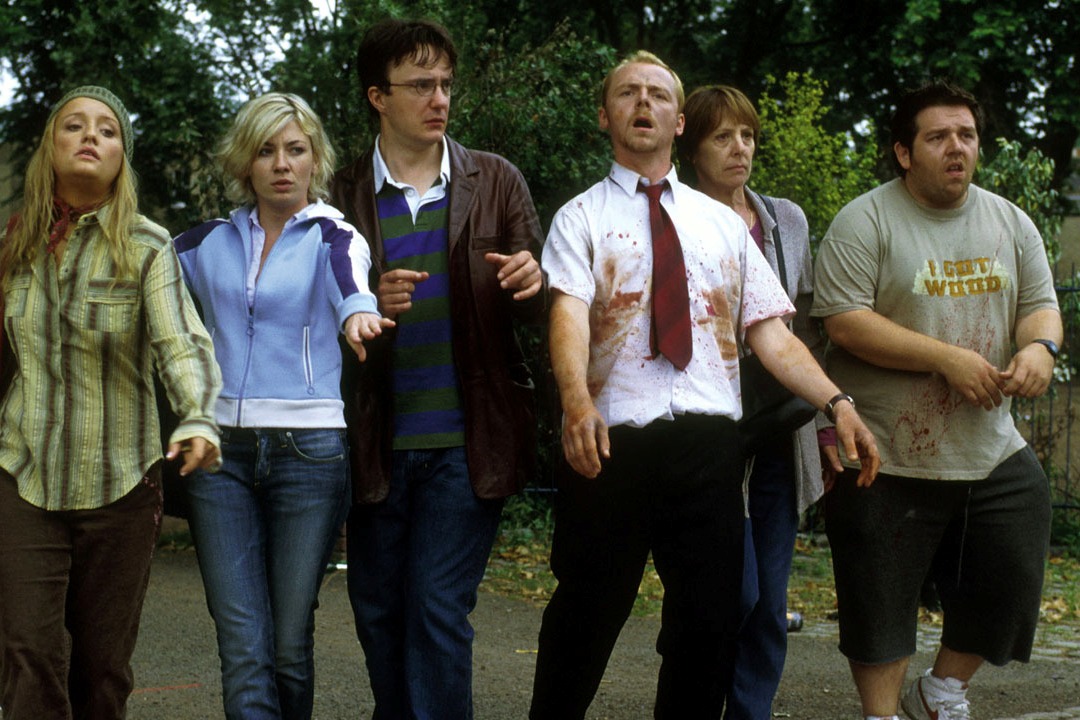 A long time ago, I decided I wouldn't design any games with violent or colonialist themes. No conquering territories, no wars, certainly nothing in the usual "attack/defense" paradigm. And definitely nothing with gore or horror. No zombies, no Lovecraft mythos, no gibbering madness.

But there is a rare situation when I stumble across a mechanic that does seem to lend itself to a theme that I don't want to use. Case in point: Ever since playing Keyflower a few months ago, I've been fascinated with the idea of using table orientation as an indication of player-ownership rather than color, graphics or some other iconography.

In Keyflower, up to six players can bid to claim hexagonal tiles. You place your bid on the edge facing you. I find this very interesting, as it opens up several other axes of information that would normally be occupied with indicating ownership. For example, in Keyflower, the meeples you use to bid come in several different colors. Once the first bid is placed on a tile, no other meeples of another color may be used to counter-bid.

I also remembered an entry to the Thousand-Year Game Design Challenge called Turning Points, from Joseph Kisenwether. It's a lovely abstract that also uses piece-orientation to indicate ownership. I highly recommend playing the browser-based demo he put up on his site, too.

But anyway, I'm digressing, point is, I had this idea...


Number-Othello
I thought it would be interesting if there were an Othello-like game with a little bit more granularity than simple black-and-white. Instead, use the orientation of the individual tiles to show ownership, thus using the graphics on the tiles for some other purpose. 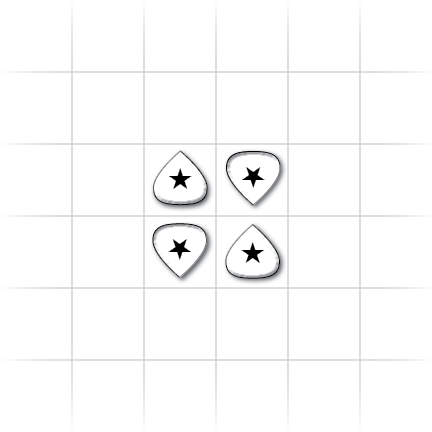 Each player has a identical supply of pointed tiles with 0-5 stars. For now, let's assume there are six 0s, five 1s, four 2s, three 3s, 2 fours, and one 5 each. These are kept in a bag for each player and randomly drawn once per turn. The game begins as shown above, with two 1 tiles each pointing at each player. I imagine this played either on no board or a board so large that it couldn't possibly be filled. 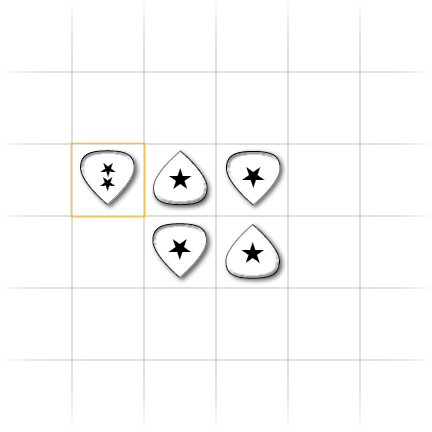 On your turn, you draw a tile and place it anywhere on the board. In the example, the orange player places a 2. 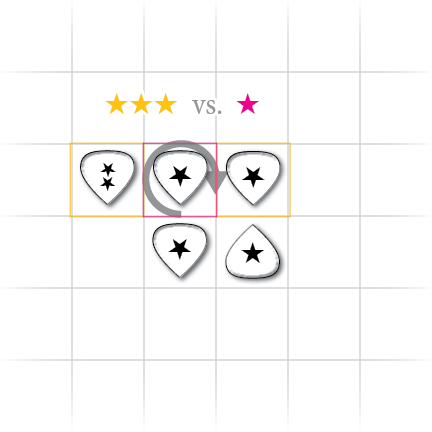 If you ever bracket a horizontal, vertical or diagonal line with two of your own pieces, you might be able to "convert" that line. If the sum of stars on your bracketing pieces is greater than the sum of stars they're bracketing, then you may turn those tiles in your direction. In the example above, orange brackets 1 star with 3 stars, so converts the 1-star tile to her direction. 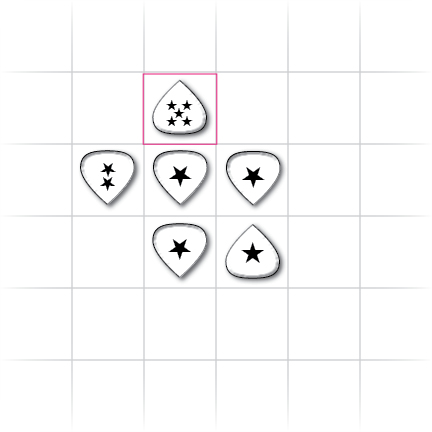 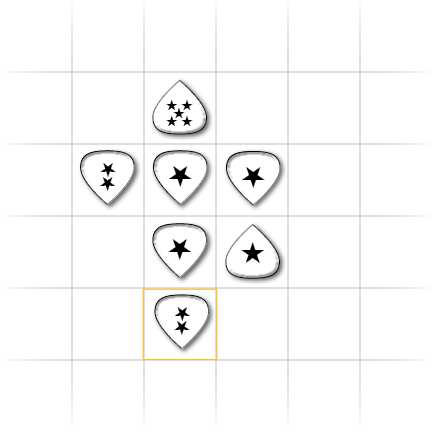 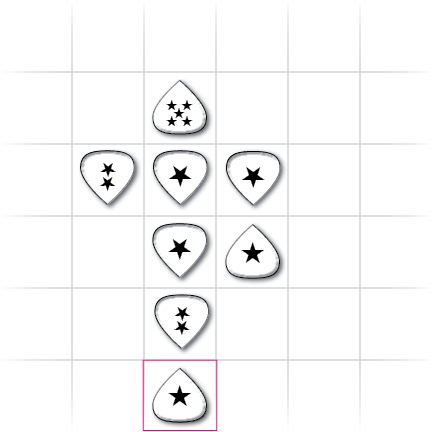 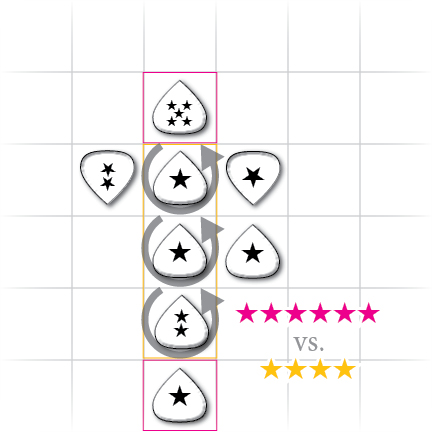 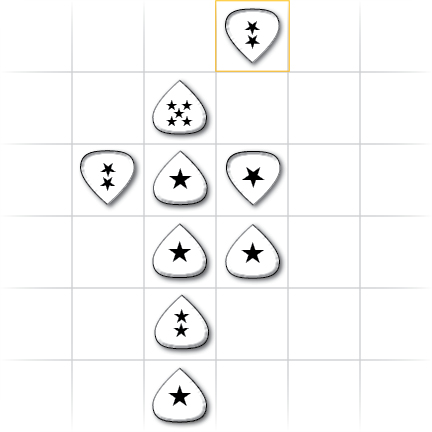 But there is hope yet, because there is another way to convert a line. If you bracket a line with a pair of your identical tiles, you can convert it regardless of their respective sums. In the example above, Orange places a 2-star tile. This happens to bracket Magenta's 5-star tile with a pair of 2-star tiles, so... 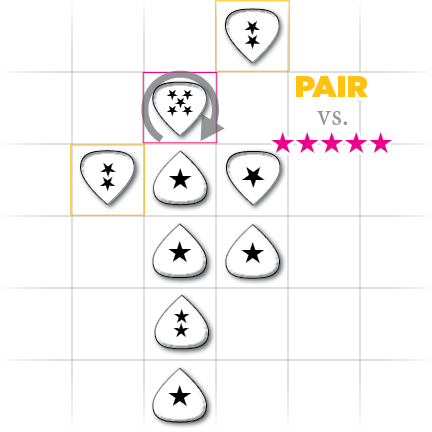 The pair converts the 5-star tile to Orange.


Turn Undead
And that was when it struck me that you could retheme this as a zombie horde. There is a scene in the most recent season of the Walking Dead where a character lures a horde of shambling zombies by playing loud music in his car and attracting as much attention as possible. It's kind of like that.

Replace the stars with zombies. Each player is trying to shoo away the zombies. The goal is to aim more of the horde at your opponent than at yourself. Placing tiles and turning them represents the easily swayed masses being led by herd mentality one direction or the other. The name "Turn Undead" was clearly the best title, since it fit the mechanics and the theme so well. Being a geeky joke on top of that certainly helped. I LOVE PUNS.

Furthermore, the tiles could easily have other resources that might turn to face the player along with the zombies. For example, if there is a cop-zombie, it's probably got weapons and ammo still on it. So in turning the horde against your opponent, you might also be delivering the tools to defend against it.

But no, I just don't want a zombie game in my portfolio. Been there, done that, and the market's too crowded anyway.


Other Themes?
Now I'm thinking about herding in general. Sheep or cows, I haven't decided yet. Sheep seem cute though.

You're trying to lure more of the sheep to your own paddock. Sheep can come in different colors, graze on different terrains, may be male or female or lambs. Perhaps even some goats? All of which could lend itself well to some set-building endgame effects.

For example, I could see some wolves or foxes lurking amidst the sheep, which would still contribute to the conversion-sums and thus be useful, but which may also be negative modifiers to your endgame score unless you also have an equal number guard dogs pointing towards you, too.

What's even better is that this could easily be translated to a deck of cards. It would be lovely to have no other text or numbers on the cards, just some sheep grazing on grass, facing one player or the other. Much more pleasant than a zombie horde.
lab spheres of influence