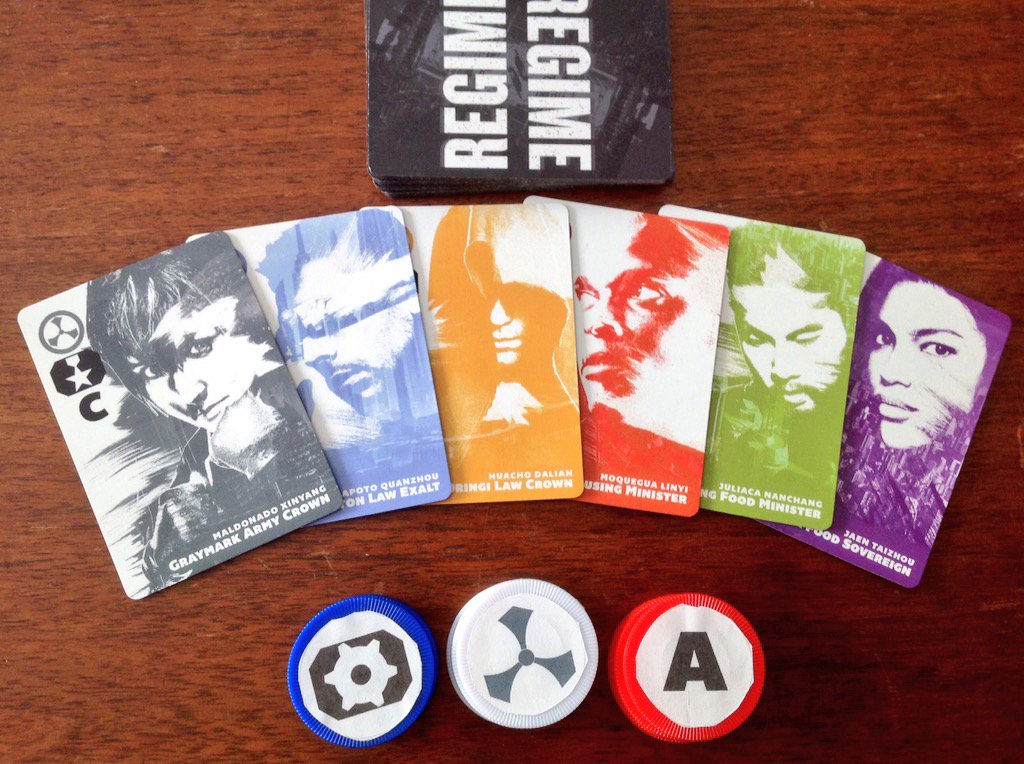 Regime is one of those games that would really do best with a retail scale production. It needs too many cards to be a profitable POD product, but I didn't realize that when I first published it. It's still on DriveThruCards, and you can buy it right now, but it's pretty much at-cost.

Since BGGcon, I've been taking the advice that I should work on more middleweight games with more components. Regime seems like the best fit for this new evolution. I've been working on updates to the components, which in turn led to some gameplay updates as well. None of these changes are final, they're just things I'm testing.

1. Faster Scoring
So, our game design guild has a rule of thumb for game design we call Vicki's Law: A game shouldn't take longer to score than to play. That seemed to be Regime's main weakness. It doesn't break Vicki's Law, but it is most certainly a misdemeanor.

At BGGcon, there was some talk of modifying the deck so some cards had only one or two suits, but none had three. My local group found that option a bit unappealing. The tension is lost or even somewhat spoiled when you had to trade a card for one that offered even less than your last one. By each card having three suits, each is equally likely of having a mix of three good/bad things.

Instead of modifying the deck, we decided we'd simply not score "Calm" during the scoring phase. The cards either gave you Unrest or Power, but Calm is simply neutral. That cut down the bookkeeping so players could get back to playing the game.

2. Modified Trading
Presently, your two choices during your turn are to "Oust" a faction into the leftmost space of the Popularity Track or to "Trade" a card from your hand by discarding it and drawing a new card blind from the deck.

We wanted players to have a little more choice in the trade action as it felt like you really lucked into a victory or lucked out of a victory by that random draw. So we changed the "Trade" action as follows.

TRADE: Discard a card. Reveal the top card of the deck and draw it into your hand, or discard it and draw the next card from the deck into your hand without revealing it.

This gives you two chances to get a better card into your hand and also reveals a little more information to the rest of the group about which cards are in the deck. If you take the revealed card, everyone knows what you took and what you gave away. If you take a blind card, then at least you've revealed a total of two cards to the group so they can plan accordingly.

3. A New Narrative Arc
The game currently has three phases to the popularity track which bestow either Unrest, Calm, or Power to the various factions. Here's how it is currently:

I initially liked this arc because it made power harder to attain over time and made players panic as more and more of their hand would become persona non grata. However, this also makes catching up much more difficult as whoever is in the lead can rest a little easier knowing that their lead is only going to become more secure over time.

Narratively, it also felt weird that the country is falling further into unrest the longer players are involved. I'd rather players feel like they're making the country more stable over time. We tested reversing the order, but that inadvertently made the third round rather deterministic. As soon as three factions were ousted into the track, the remaining three were already guaranteed to score points.

So instead, we're testing this alternative narrative arc:

The players are still ostensibly making the country more stable, but there's one additional sting as the first and last factions on the track will cause unrest. When three faction chips remain in the general pool, you're still not sure whether they'll be valuable or deadly.

4. More Dangerous Unrest
I still need to test this idea further, but if I'm not scoring Calm anymore then I want Unrest to feel a little more thematic than a mere point bonus as it stands now. One way to do this would be as follows:

"Whoever has most Unrest cannot win. Period."

This makes Unrest very dangerous, feels much more thematic, and removes one extra bit of accounting from the endgame. Sounds like we hit three birds with one stone, but I want to test it more to be sure.


5. New Components
If this is going to go to a retail publisher, it needs some room for chrome or stretch goals.

- Chips for the factions, which would be easier to handle than cards.
- Bifold score track going from 1-30. It might have a space for the deck and the discard pile.
- Two pawns for each player, one representing Power (points) and one representing Unrest.
- A "current turn" marker, so you know who takes the next turn after each scoring phase.


And that's where Regime development stands at the moment! Hope you like where it's going. As I said, none of this is inal. Feel free to test this with your own copy and send feedback. I appreciate it!
regime