Rhombus for the Rest of Us [Isometric Grids in Tabletop] 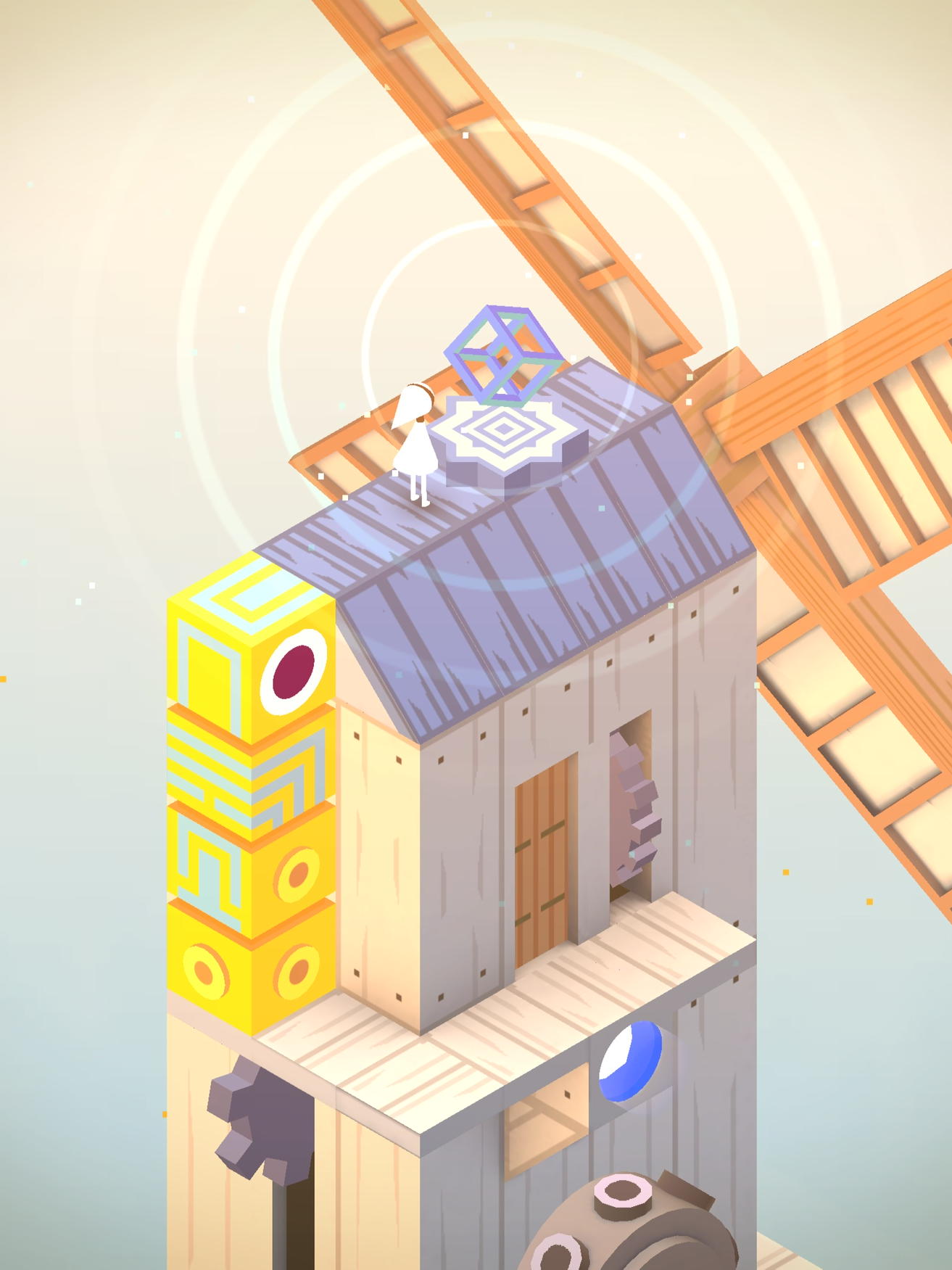 I just recently finished Monument Valley, the gorgeous and brain-boggling Escher-inspired puzzle game. It's been around for a little bit, but seems to have had a resurgence since it was a free download last week. Naturally, it got me thinking about how we might use rhombuses and isometric grids in a tabletop game.

Looking at some existing examples, Rome: City of Marble makes some clever use of these grids and emergent patterns, but Monument Valley has that lovely interaction with implied perspective that I really wanted to capture on the table. The Rocca line of games from Japan is closer to what I wanted to see, but still feels relatively linear compared to Monument Valley's three-dimensional gameplay.

All of this converged on two different games I've got on my docket:

This is a co-design with Drew Hicks. We're both members of the Game Designers of North Carolina and we got to talking about an upcoming "meta" contest from Greater Than Games calling for games where the title is also the central mechanic. (These would be follow-ups to their game Deck-Building: the Deck-Building Game.)

Our idea was a tile-laying game about laying tiles. Initially this was laying tiles in a bathroom, and we started with this rough sketch. 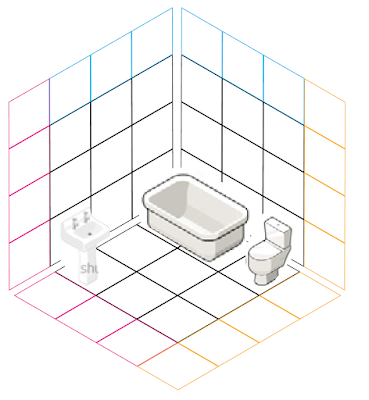 I roughed out a mockup of a tile set with some simple rules: On your turn, lay a tile. When a line is complete, whoever has greatest total ranks on that line scores whatever that line of tiles says to score. 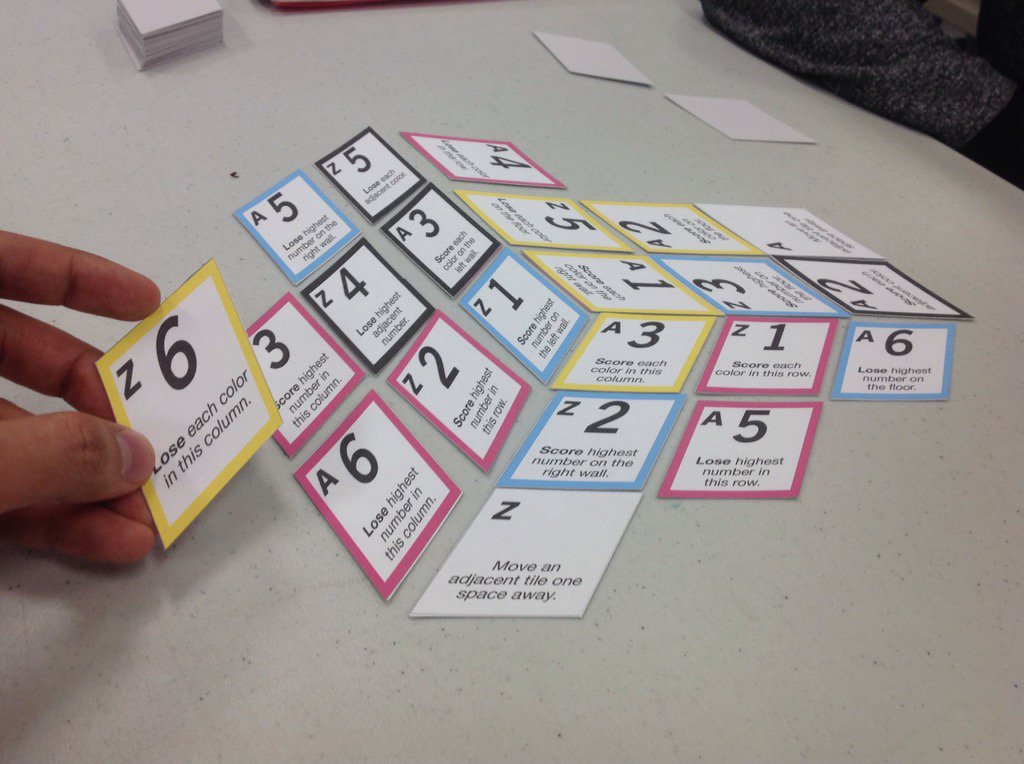 It was an absurdly AP-prone brain-burner, but that's how a lot of my games start. Drew cut back this thorny bush into a more svelte bonsai. The new rule was having a simple majority of tiles was what earned you scoring privileges and the only tiles you could score were your own. 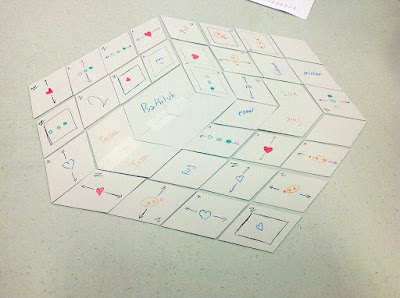 We're also retheming it to be some kind of ancient period mosaic-laden plaza, so the scale of the art can allow for us to add a bit more detail to each individual tile. We're adding a row to the top of that grid that will feature mythological deities that bestow scoring bonuses to the line of tiles below them, from the top of the wall, to the bottom edge of the floor.

This one's still pretty nascent, but I think the visuals are strong enough to really give it legs in the long run. If there's thing I learned from Kigi and Kodama, it's that people like collaborating building pretty patterns that make passersby stop and look for a moment. 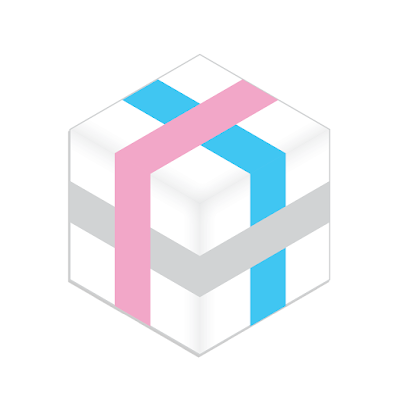 First I mocked up a few hex tiles with the rule that they always feature three paths, each a different color, each connecting two sides of a hex with no overlapping entries or exits. 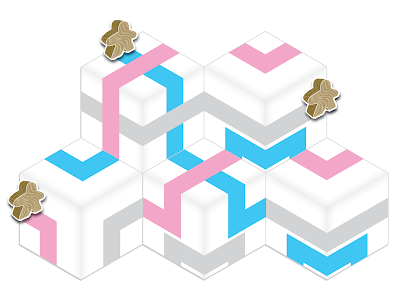 I placed these hex tiles together and threw on a few meeples to imagine what this game would be like with figures like Monument Valley's hero Ida traversing this weird isometric world along those paths. 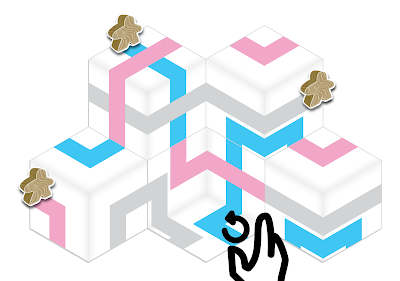 What happens when you rotate a hex? Suddenly the implied ceiling becomes a floor. New paths also get created as a result. Are there some interactions with the faces of each implied cube? 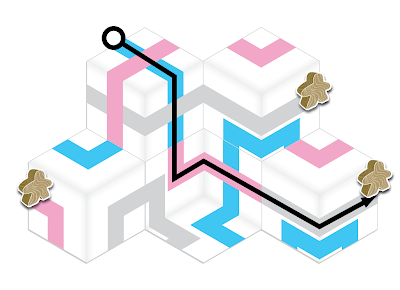 Why this player would prefer to traverse along a path that is multi-colored. I wonder if the rule is that you can't enter a new tile unless the path changes color? That may be too counter-intuitive unless the idea is that you're picking up different colored cubes from the corresponding paths and delivering them to differently colored segments of the path. 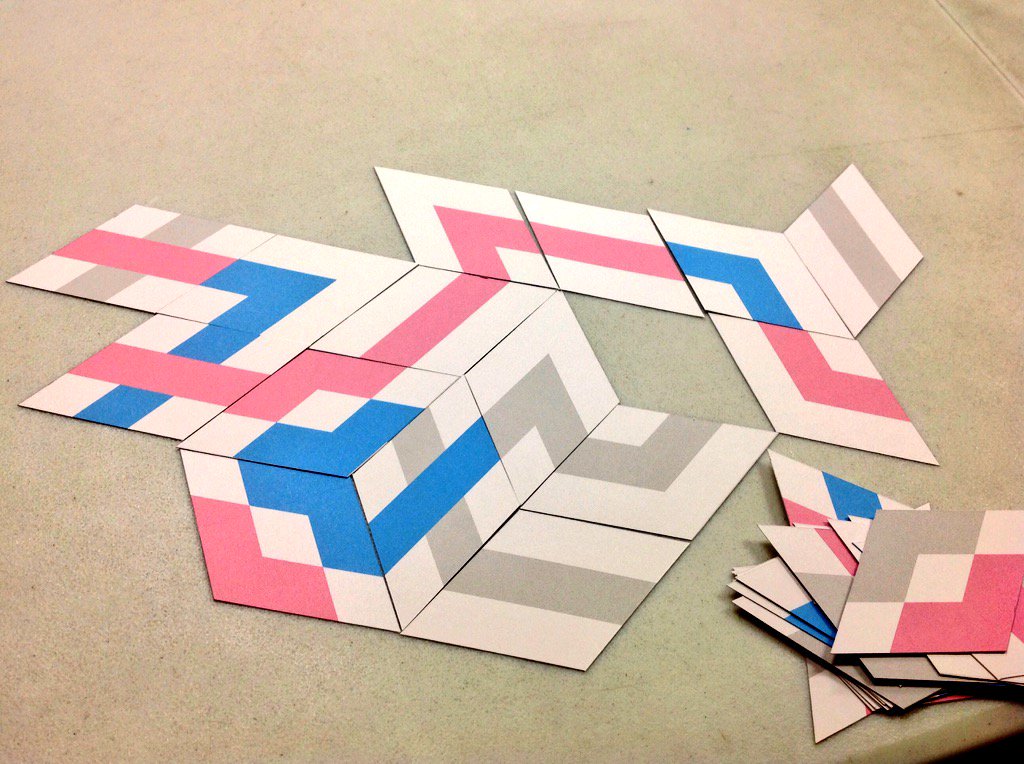 It was about this time that I realized I didn't have to go through the trouble of making hex tiles when I could make the rhomboid faces of those hexes, thereby allowing players to make their own decisions about whether to make it a hex grid or not. This made some interesting gaps in the grid where a tile couldn't legally be placed. Perhaps those are the destinations for the various deliveries you need to make?


Ever since BGGcon, I've really taken to heart the advice to stretch beyond cards a bit. I'm really enjoying this so far! Hope you're digging the journey as well. :)
game design game designers of north carolina lab tile-laying