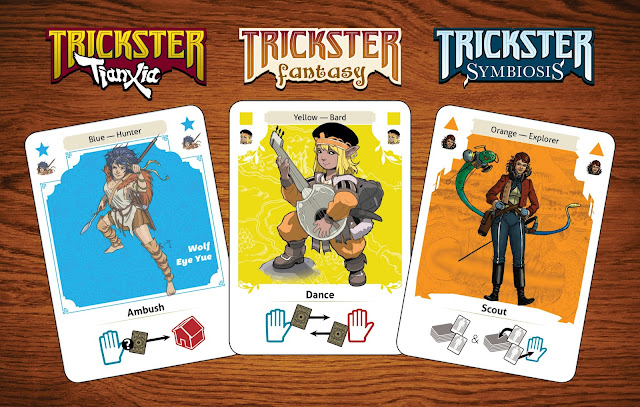 Great news! My new card game Trickster is just about ready to go live later this month. Until then, you can find the live google doc of the rules and print-and-play files here. Good and generous friend Ruth Boyack will also be floating around Origins 2015 this week, where she'll have my prototypes on-hand to teach and play. Thanks, Ruth!

Now I have to think about release schedules. Each Trickster set is meant to be a standalone game, with its own set of thematically related characters. If you have several decks, you can take characters from different decks and mix them together.

I still intend to self-publish on DriveThruCards, as I have done with several of my other card games. POD has a lot of strengths, like immediate release and minimal overhead. But the biggest setback is the cost of shipping.

It's a big sticker shock, especially overseas, so anything I can do to encourage impulse bulk orders is good. This is why most of my products are under $9.99 and why I released a high volume last year. It's all to encourage any fence-sitters to finally click "check out."

The past few weeks I've posted on Reddit and on BGG asking for input on how to best release each new Trickster set. It seems like the best release schedule would be to launch two decks first, then wait at least two months to release the third, and continue on a bimonthly schedule.


That's all I've got planned for now. If I am super eager to release new content in those off-months, I can release small single-character mini-packs. I already have plans for Loki and the UnPub Noodle as promo characters.

It's a tough balance between maintaining awareness in the long term and flooding the market with too much product. I'm hoping that bimonthly schedule doesn't overwhelm demand my workflow. Thanks for your support!
trickster