A Social Deduction Game with Much Less Yelling 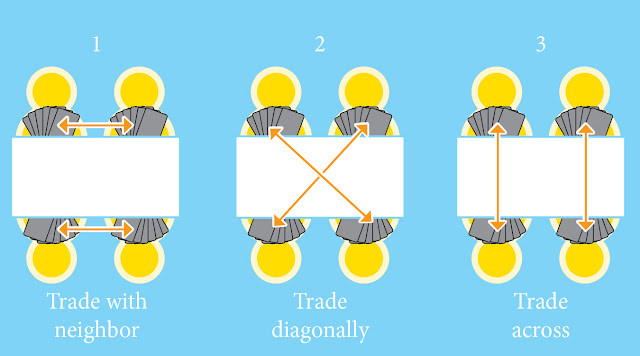 At the last Game Designers of Carolina meetup, four of us (Burke Drew, Mark McGee, and Josh Mills) went aside and playstormed a few different ideas using cards with only numbers and colors. One was this oddball little social game that I'd like to explore further.

Each Round Setup
Four players were each randomly and secretly assigned Red or Blue team. We had deck of cards with 13 red cards and 13 blue cards, each numbered 1-13. We were each dealt a hand of five cards, with the remainder set aside from the game.

Each round began with a trading phase, which was divided into turns. During each of these turns, players negotiated openly and said whatever they liked about their team allegiance or what cards they wanted.

Trading Phase
Turn 1: Each player traded one card from their hand with their neighbor.

Turn 2: Each player traded one card from their hand with the player diagonally across from them.

Turn 3: Each player traded one card from their hand with the player facing them.

Then turns looped back around so we traded with our neighbor again in turn 4, with the player diagonally across on turn 5, and so on.

After the third turn, and after any subsequent turns, any player could call for the trading phase to end.

The twist is that the WHOLE TEAM scored points equal to the LOWEST scoring team member. So if the two Red team members score 30 and 10 respectively, all the red team members only score 10 points total.

So the trick of the trading phase was figuring out who is actually on your team while also managing your hand so it's not too high, since it might be hurting your team's overall score.

Despite having teams, this was an individual competition game, so your individual score carried over from round to round.

New Rounds
Each new round, teams are re-assigned secretly and randomly, then trading and scoring continues as described above.

Victory
We didn't settle on an outright victory condition, but I imagine something simple like first-to-X would be an easy way to go.

Additional Notes
The trading phase gets more complicated with more players. We'd have to figure out an equitable trading pattern in order to keep players trading with at least three different people each round.

Odd numbered players are also an awkward situation. I think that player ought to be a Rogue. The Rogue is essentially his own team. The Rogue scores points equal to the lower total ranks of either color in his own hand. So if the Rogue has 15 Red and 4 Blue in hand, he only scores 4 points.

I'd reduce the highest rank to something more manageable, like 5, so the scoring phase can move a little faster.

Overall this was a fun social game despite having so little information about each player's allegiance each round. I was aiming for a social game that didn't rely so much on one player logic-ing and bullying the other players into following their lead.
lab