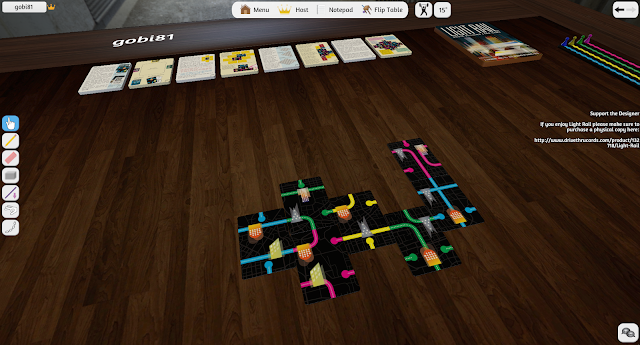 Last week Paul Dean published a really interesting article for Rock Paper Shotgun about board game publishers, Tabletop Simulator mods, and copyright. He asked for comment from several smart people in the board game industry, and also me for some reason. Go check it out then come back here.

When Paul interviewed me for his article, I admit that Tabletop Simulator wasn't really on my radar. I found the Steam interface rather opaque, so I never really explored that marketplace much. I knew Tabletop Simulator was out there, though, and this was as good a time as any to finally deep a toe into that pool.

As you might have seen from my rather permissive stance in the matter, I see TTS modding as something similar to print-on-demand. Both are emerging technologies with creators trying to get  tabletop games out faster and more affordably. Both are still very niche media channels, too, so I feel a bit of kinship there. After having been approached by many digital app studios that never really went anywhere, I'm impressed with the gumption of individual modders Getting It Done.


Eventually the Paid Mod program will return to Steam and I gotta be ready for it. I'm always up for trying out new technology that lets creators get their work out to people quickly, while still making some money from it. I felt that way about crowdfunding, print-on-demand, patronage, and now modding. I just want to make sure any modders out there know I'm cool with them tinkering with my self-published games freely... but when money starts becoming a part of it, we gotta work out a contract together.

It's under those terms that folks like Ryan Wilshere are developing a Light Rail mod for Tabletop Simulator. It's not live yet, but it looks pretty dang polished to me so far. (If you want more info, contact rwilshere at gmail dot com.) I'll keep you appraised of how this and other mods develop.
light rail tabletop simulator