Hello! This post comes to you the day after BGGcon when I'm still bleary-eyed and recovering from a fast-paced four days of pitching and playtesting. It was a wonderful experience and I'm sure lots of folks will have much better documentation of the event than I do.

Instead, I wanted to show you a snapshot of what it was like with such a critical mass of game designers in one place. Emerson Matsuuchi, Chris Rowlands, Adam S., Mark Streed, and I were hanging around the main hall on the last day. I pulled out a deck of cards and openly noodled a few different interactions I've had tumbling around.

In particular, I had idea of being a merchant in Nottingham trying to earn wealth, but not so much that Robin Hood would steal your ill-gotten gains. Sort of the inverse scenario of Sheriff of Nottingham. Here's what we came up with after lots of playstorming and collaboration. I can't claim sole credit for this game, it was definitely a collaboration between all five of us.

In the taverns of Sherwood Forest and Nottingham, the locals play a card game inspired by Robin Hood's legendary bandits who rob from the rich and give to the poor. Players try to earn the most wealth without catching the attention of the thieving Merry Men.

We only tested this with five players, so the rules below assume five players are present. Each round of play lasts about five minutes and we liked to play multiple rounds, tracking our cumulative score.

Setup
We remove one suit and the jokers from a standard poker deck.
We shuffle the remaining cards and deal seven cards to each player's hand.
We set aside any undealt cards out of the game.

Gameplay
We play out a six "days" in Sherwood Forest. (The local merchants take Sunday off.)

Each day, we each choose one card from our hand and put it face-down in the center of the play area. The heart of the game is in negotiating with each other and coming to agreements about which cards we agree to put out into the pot. A common deal would be

These negotiations are not binding. We may and probably will be bluffing about half the time. Paying attention to the other negotiations is also important, as the other player's side deals will affect you as well.

Once we all put in our cards, we reveal them. Aces are considered 1, Jack is 11, Queen is 12, and King is 13. Then some mandatory trades will occur, listed below:
Here are some sample turns: 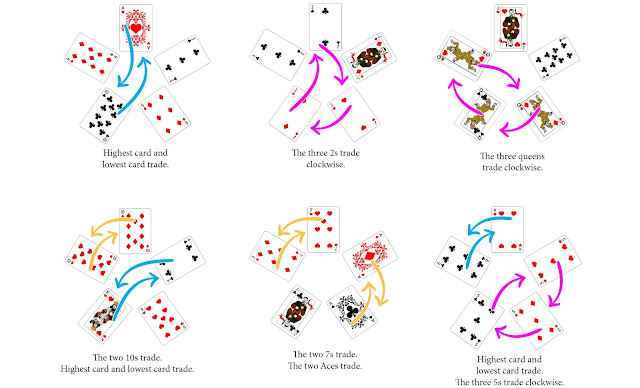 Once trades are resolved, the card we received this day goes into our personal stockpile face-up. (In other words, a public tableau.)

We repeat this process for a total of six days, then we discard the one remaining card from our hand.

As an optional rule, you may decide if each of your Aces are valued at 1 or 14, thereby giving you a little bit more control of whether you get to keep your cards away from that thieving Hood.

Your final score is highest ranking card you have in each suit added together.
bggcon card game game design Sharewood