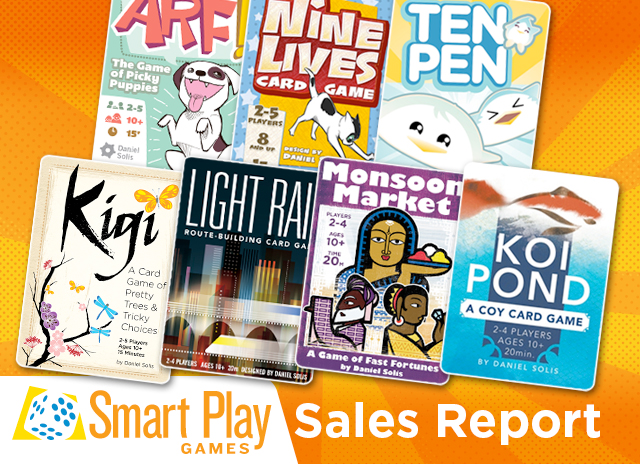 Happy new year, everyone! It's been a long time since I've done a proper sales report, which probably foreshadows the transitions from 2015. I kicked off the year knowing that I couldn't repeat the same pace I held in 2014, releasing one new game or product each month via DriveThruCards' POD service. That wasn't sustainable for the long-term, but it really yielded great rewards and I'm glad I did it. Without further ado, let's look at the numbers and break down some context. 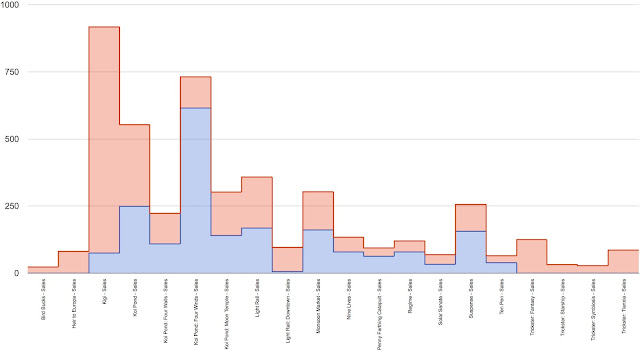 Here are the sales numbers for each product in 2015 (in red) compared to 2014 (in blue). The good news is that every product that existed in 2014 sold more units than it did in 2015! Across the board growth is very positive. 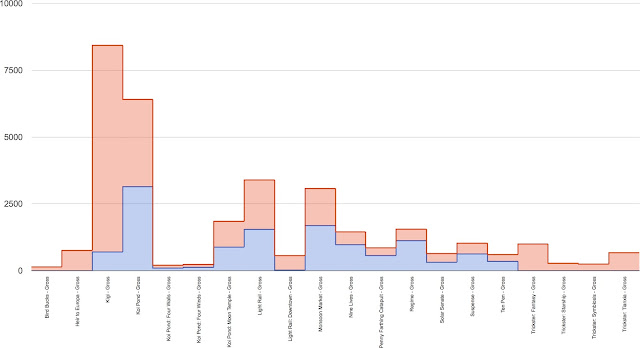 These are the gross sales numbers for each product in 2015 compared to 2014. As you can see with some small low-priced products like the Koi Pond promo cards, the sales numbers far exceed their actual dollar gross. These numbers fluctuate month by month based on whatever promotional discounts I've got in place at that time. 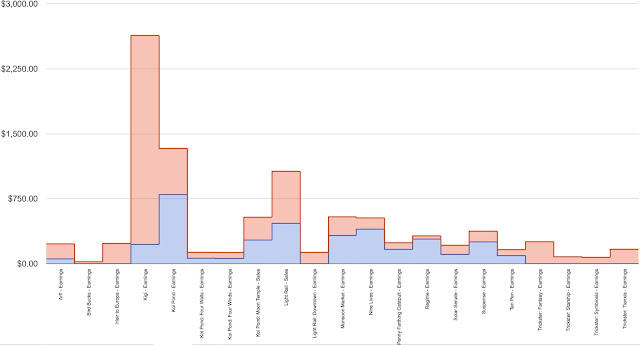 And here are the actual earnings from each product in 2015 compared to 2014. This is what's left over after DriveThruCards takes its cut.

Funny how on all of these charts, the big 800-pound gorilla is Kigi. Koi Pond used to be my flagship product and the high bar for anything else in my catalog, but holy cow Kigi earned double Koi Pond's 2015 earnings and tripled Koi Pond's 2014 earnings! Wow, what a year.

Okay, let's break down the year by subject.

Heir to Europa
2015 was a very experimental year. Early on, I wanted to pick up licenses for other designers' games, hoping to offer others the same success I'd had with my POD model. Nick Ferris agreed to let me publish Heir to Europa, a lovely trick-taking card game. Unfortunately, I hadn't anticipated how much other business would distract me from properly promoting and supporting Heir to Europa in the latter half of 2015. I really want to release more standalone suits for the game, but a proper rules tutorial should be produced first. That has unfortunately been delayed by my own freelance work ramping up into December. I still feel bad about how slowly that's been developing. I hope 2016 will be a year for Europa.

POD Imports
As a part of 2015's experiments, I pursued some licenses for foreign games that I thought would be easy to release via POD. Most of these games have extremely short local print runs and never reach US shores, so I thought POD is a great way to "import" the games in an affordable and efficient form. I still think POD has the strong potential to take on that role, but perhaps I'm not the best salesman for that proposition. For now, traditional import and licensing retail seems to be the more attractive channel at the moment. The BGG Marketplace is doing some interesting things with this area of business.

A La Kart
I began the year deciding I'd focus on one game instead of my manic pace from 2014. That game would be A La Kart, which I brought to UnPub and got a LOT of really good feedback on. However, it became clear that the theme and the mechanics, while both very fun and interesting, didn't match each other well. So around BGGcon, I decoupled the theme and mechanics from each other and designed a better fitting game for the wacky racing theme. So far, tester response has been very good and it's currently being evaluated by a major publisher!

Becoming More "Legit" at BGGcon
The impostor syndrome bit me hard at weird moments this year, most notably in still thinking of myself as a novice game designer. At BGGcon, some really veteran designers whose opinions I respect suggested that I actually shouldn't attend the speed dating event as it's really meant for rookies. I had counted myself as a rookie as well, but these vets said, no, I'm actually somewhere in the middle. I've got a few games under my belt now and I should be pursuing more formal meetings at conventions. Fortunately there was time to reorient my strategy and get more of these face-to-face meetings scheduled. Hope something good comes from them!

Princess Bride: As You Wish
Princess Bride: As You Wish also released this year, which was an important reminder of the long production cycle required for major retail releases. I originally signed that license back in 2013, then after some development it got kickstarted in late 2014, finally releasing to the retail channels just a few months ago. I have to keep these long lead times in mind as I pursue new licenses.

POD business and Retail Business
One thing I found out at BGGcon was the awkward position my POD successes had put me in. Am I an indie designer? Am I a publisher? Am I a beginner? Certainly the POD games were getting attention and buzz, but that didn't necessarily translate into products which would have strong retail or kickstarter potential. I referred to this as the Chrome Ceiling. POD got me to a certain point in my career, but proper retail with bigger games was the obvious next step. As I learned from Princess Bride, it could be up to two years before a game hits retail and bills are coming in the meantime. So while I develop and pitch bigger games, I have to find other ways to supplement my income month-to-month.

That's where my updated Patreon came in very handy in the latter part of 2015. By changing to a monthly schedule and releasing more videos more regularly, Patreon offset some very slow sales months from my POD store. Selling some of my complimentary Japanese and Chinese editions of Koi Pond and Kigi also helped fill in the gaps. That's not a long-term solution, but it helped during a few leaner weeks.

Kigi and Kodama
Kigi and Kodama are the standout milestones from this year. It's hard to believe how eventful a year it's been for these games. Kigi got picked up by Japanese publisher Gamefield and sold out at Tokyo Game Market in May. Then a few months later, Action Phase were such big fans that they wanted to develop the core mechanisms into a whole new game. Kodama: the Tree Spirits went on to raise almost $100,000 on Kickstarter and become their highest funded, most backed project to date. Kodama is going to be in the Mensa Mind Games competition this year as well, which will be very  exciting to watch.

Trickster
Trickster has had an even faster lifecycle than Kigi. I released my first Trickster sets in the middle of 2015. Now I'm happy to announce Action Phase Games is also picking up Trickster for retail publication! They really liked the gameplay and we're currently developing it into a bigger game in a bigger box. Something about the scale of Smash Up or even Dominion. We have big plans ahead. More details to come!


Thanks very much for your support in the past year!
a la kart drivethrucards Heir to Europa kigi kodama patreon princess bride sales report smart play games trickster