A New Lake for Koi Pond? 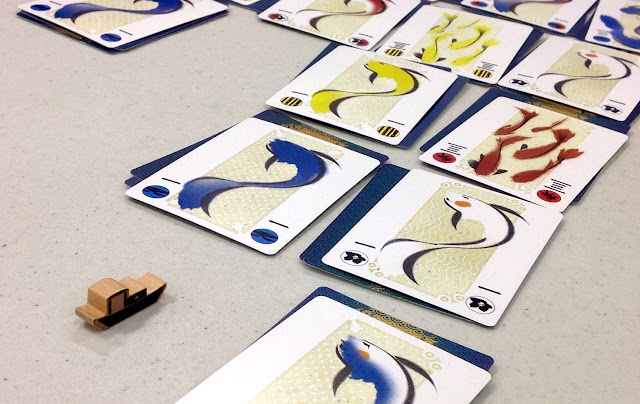 I'm developing some variants for Koi Pond in an effort to make it a more viable retail publishing candidate. That includes more opportunities for components and as a result significant rules tweaks. I want to keep the spirit of the game intact, which makes this a significant challenge.

First and foremost, I need a new way to handle the lake that works in round 1, but cuts down the analysis paralysis of selecting from a whole pile of face-up cards. Here's where I'm at right now.


The New Deck
My local development has been working with the full Chinese edition of the game, which includes the Moon Temple expansion. This lets me have a bit more freedom to mix up cards and set aside other cards as future chrome bits.

The new main deck is comprised solely of Koi cards; no other animals. These include the 4-rank and 5-rank cards from Moon Temple as well as the rainbow 1-rank koi. This ends up being 80 koi cards, which is a little more than enough for a full game of four players.

The ribbons, cats, cranes, turtles, shrines, novices, monks, and abbots would be replaced with actual 3d objects. That's beyond the scope of a single blog post, so let's ignore those for the time being until a future post.


The New Lake
Every round begins as follows:

Shuffle all of the koi cards into a single deck. Then deal them to the center of the play area as a 5x5 grid of stacks, with three cards each. The bottom two cards of each stack are face-down but the top card is face-up. The center space of this grid is kept empty, so do not place cards here.

Any remaining cards are not used this round.

There is a new component in this edition called the Boat. I'm using the boat from Lanterns: the Harvest Festival for my home tests. The boat starts in the center of the lake in the empty space. 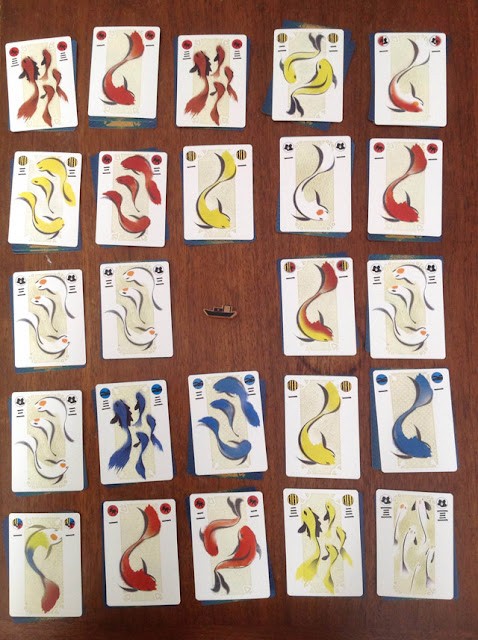 On your turn, move the boat up, down, left, or right to the nearest stack of cards in that direction. Note that this means the boat can go any distance, as long as there is a stack in that direction. If the boat has no stacks available in either cardinal direction, then it may move to any stack.


I'm still testing this out locally, but I'm hoping it keeps the spirit of the original game while making the Lake a little more manageable. I'll write about the other components I'm thinking about in a future post!
koi pond