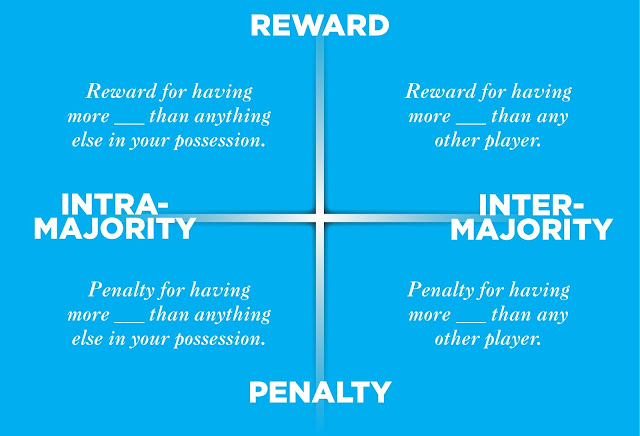 There's been a distinct trend in my recent game design, perhaps a crutch. I like designing mechanisms for players to collect a variety of resources, but negating whichever resource in which they have a majority.

So far, I've only explored "majority" in the sense of an "inter-majority." In other words, having more Wheat than any other player would be considered an inter-majority. 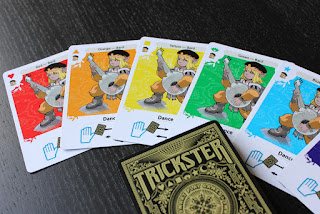 Inter-Majority Negation as a Reward
In Trickster, players are trying to avoid the attention of heroes, which is represented by scoring points. Lowest score is the winner. Cards come in seven different suits, each typically scoring one point for you if they're in your possession. At the end of the game, if you have more cards in a suit than any other player, you ignore those cards in your score. As a result, players either try to have as few cards as possible or, if unable to accomplish that goal, try to get as many cards of the suits they already possess in order to "shoot the moon." 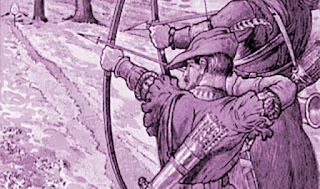 Inter-Majority Negation as a Penalty
In Curse You, Robin Hood, players are merchants in Sherwood Forest trying to become rich, but not so rich that they draw Robin Hood's thieves. Here, highest score is the winner. Cards feature a number of "target" icons on them representing how high profile those goods are. At the end of the game, whoever has the most targets in a particular category of good must remove all of those goods from their stockpile before scoring.

That leaves open two other possible types of mechanisms that I haven't quite explored yet. These are "intra-majority" mechanisms which only look at whatever you personally possess. In other words, if you have more Wheat than anything else in your possession, you'd have an intra-majority in Wheat.

Intra-Majority as a Reward
The first example that comes to mind is Coloretto, wherein you score positive points for whichever suits you have the most of within your collection. In this case, it doesn't matter whatever else anyone else has collected. It strikes me that a game with this mechanism would have to be one where players have only partial control of what they can collect. Are there other games in this category? How do they resolve this design challenge?

Intra-Majority as a Penalty
This is a tougher one to find an example of, but I think Reiner Knizia's scoring mechanisms in Tigris & Euphrates and Ingenious fit this description. In both games, your score is based on whichever resource you have the least of, thereby effectively discouraging majorities in any one category. However, these examples are a little muddy since you do get some tactical rewards for pursuing high quantities of a particular resource, particularly if it's a zero-sum situation preventing anyone else from acquiring that limited resource. Can you think of any purer examples?


So anyhoo, these are just idle thoughts I had this morning. It occurs to me now that these mechanisms don't need to exist in isolation. There could easily be games that include all four of these goals. Assume this is a game like Coloretto where players only have limited control of how they acquire cardds and each of four suits represents one quadrant of the chart above.

♠️: Score one point for each card of this suit in your possession. Discard all cards of this suit if you have more of it than any other player.

♣️: Lose one point for each card of this suit in your possession. Discard all cards of this suit if you have more of it than any other player.

♥️: Score one point for each of this suit in your possession. Discard all cards of this suit if you have more of it than any other suit.

♦️: Lose one point for each card of this suit in your possession. Discard all cards of this suit if you have more of it than any other suit.

What would a game like that look like? What would be the theme for each of these suits? I'm curious to see where this might lead.
game design