I've been playing Seasons a lot lately on Board Game Arena. Gosh, I am terrible at it. Not sure what it is, but I've been finding it a really difficult game to wrap a strategy around. Oh well, at least it's introduced me to some interesting rondel mechanics I'd like to explore further. Rondel mechanics and card drafting seem to be all the rage in game design this year. Here's a loose idea for a game that adds area control to the mix.

Players are asteroid miners laying claim to 54 big rocks orbiting the central planets of the solar system. The big rocks are code-named according to the cards in a standard deck. 2Club, JackDiamond, Joker-1, etc. Your goal is to lay claim to the asteroids and earn the best profit after three years. 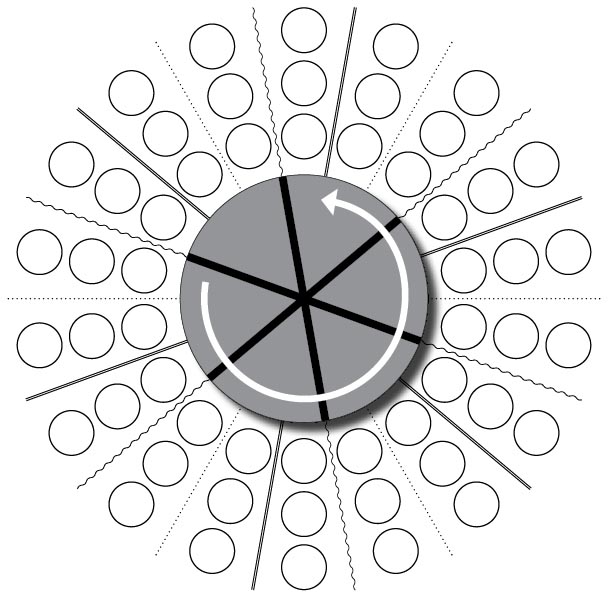 This board represents is an asteroid belt. The center rondel rotates one increment per round, highlighting six distinct regions of the asteroid belt at any one time. (Note the wavy, dotted and solid lines.) I think the Rondel will also show market values for various resources, too.

There is a 54 card deck. Each card corresponds to a space. Each space has a resource that it offers. Each round, all players draft n cards from the deck. After drafting, place claims on that space of the board.

Next, all players extract resources from all spaces they control. A resource cube is then placed on each space. REGIONAL BONUS: If a player owns the most spaces in the current region, she gets a bonus. Dominating a wavy region earns x bonus, dotted region earns y bonus, a solid region earns z bonus.

Next, players may spend resources to build facilities or get credits.


In other words, the outer rings have the most valuable resources, but controlling the inner ring lets you tax the import of those resources because you control access to the central planets.

The player with the most credits after three full rondel rotations wins.


Folks on G+ had some interesting ideas for additional effects, like labeling overlapping sections of the outer rings according to major arcana of the tarot, like constellations. Also some thought about having to actually move a delivery ship across the board one space at a time, thus making waiting for a delivery window actually important. Interesting indeed. What are your thoughts?
board game lab