Earlier this week I described how Lyndsay Peters and I got to talking about a little dice game inspired by my misinterpretation of a key rule in Martian Dice. After discussing several different themes, we settled on noodle-making. Here's the full game as it stands now. We're calling it Noodle Roll.


OVERVIEW
Players take turns rolling dice several times, keeping sets ("strands") of three or more identical faces, and scoring based on the face value of those sets, plus any bonuses. As play continues, the board’s columns get filled. When two columns are filled, the game ends.

The group shares a supply of 13 standard six-sided dice.

Each player has a supply of cubes in her own color.

Each player gets three Sous-Chefs cards. I imagine a different sous-chef on each card. The face shows the sous-chef standing at attention, ready to take orders. The back shows the sous-chef hard at work making a noodle dish. I'd love it to resemble Jason Deamer's concept art from Ratatouille. One can dream.

The active player gets a player board that looks like this.

The whole group shares a board that looks like this: 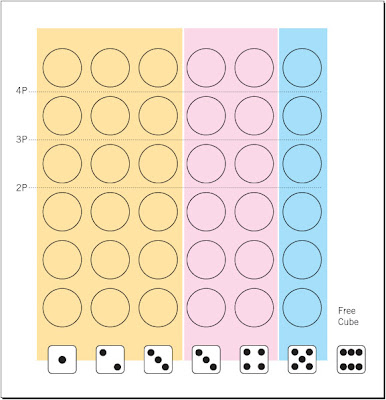 First, refresh one Sous-Chef. If none are spent (as would be the case in the first turn) then proceed as follows.

Roll all of the dice.

Now, you must keep one set ("Strand") of three or more identical faces. If there are more than one set available, you must choose only one to keep. Keep this set on the player board in the area designated for your "first strand."

Next, you may roll any remaining dice in pursuit of a second set or you may end your turn. If you do roll again, you may keep another set whose face is equal to or greater than the first set you kept.


When you spend Sous-Chefs, turn over their card face-down to indicate that they are occupied following your orders.

Once a set is kept, no more dice may be added to it. If on a later roll you get a set whose face is identical to a set you've already kept, you must keep those sets separate from each other. For example, if you kept a set of 1/1/1, you could keep a second set of 1/1/1 from another roll in the same turn, but those two sets would be separate from each other. They are not cumulative.


Pass all dice and the player board to the player to your left. Any Sous-Chefs you've spent remain so until the start of your next turn, at which point one will be refreshed.


ENDGAME BONUS
Score 10pts for each pair of your horizontally adjacent cubes on the board, but only if they’re in the same restaurant, as indicated by the colored backgrounds. Thus, the "5" column has no endgame bonus. Columns 3 and 4 can have an endgame bonus. Columns 1, 2, and 3 allow rows of three adjacent cubes, thus effectively being two pairs, thus two bonuses.

So, pursuing low-value sets in the short-term can yield big bonuses if you can make pairs on the board. Pursuing the highest value sets yields no endgame bonus at all, but they are the easiest to create with the assistance of Sous-Chefs.
dice game noodle roll