Last week I posted Noodle Roll, which had a lot of clever thematic elements like creating "strands" of identical dice results or employing sous-chefs to compensate for sub-optimal rolls. Where that theme fell down was in the big group board. 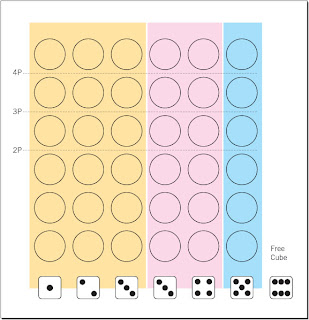 Exciting. What the heck is this supposed to be anyway? Mechanically speaking, the board featured columns and rows of spaces in which you were to place cubes. Pairs of horizontally adjacent cubes in the same color-coded area granted you a 10pt bonus. One area had three columns, enough room for two pairs. The middle area had only two columns, room for one pair. The last area had only one column, meaning there was no room for any pairs.

When I came up with this board, I didn't really bother thinking about a thematic reason for its layout at the time. I just liked the clever adjacency mechanic. I hand-waved that these areas represented restaurants with broad or specialized menus. You played workers at a noodle factory delivering shipments of noodles to those restaurants. Yeah, it's about as exciting as it sounds.

This is a problem I have. I take the game's perspective too high up. This tends to make very abstract, impenetrable themes that only die-hard Euro gamers would find interesting (maybe). What's worse is that in the case of Noodle Roll, it didn't even explain the adjacency bonus very well. Time for a revision. 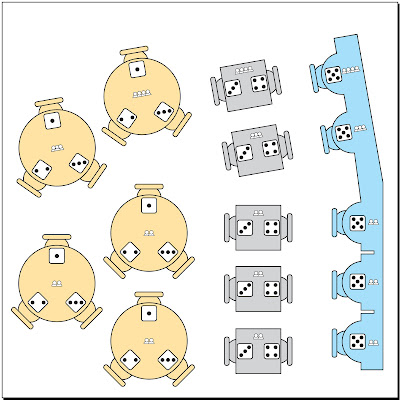 Now placing a cube represents serving a diner in the restaurant. The "adjacency bonus" comes from serving the same table multiple times. Now it makes more sense why players would compete to fill those table's orders fast. The adjacency bonus is a tip. With this new board, the "6" could represent the manager, who isn't as efficient as the actual wait staff but can serve any table at any time.

This board could easily have modular effects for each table as well. There are numerous things to do at a restaurant that my evoke some cool mechanical effects.


Anyway, this already feels like it's going in a better direction. It's always nice to take some cues from the theme to make the game more accessible and strategically interesting, without making it simulation for simulation's sake.
game design lab noodle roll