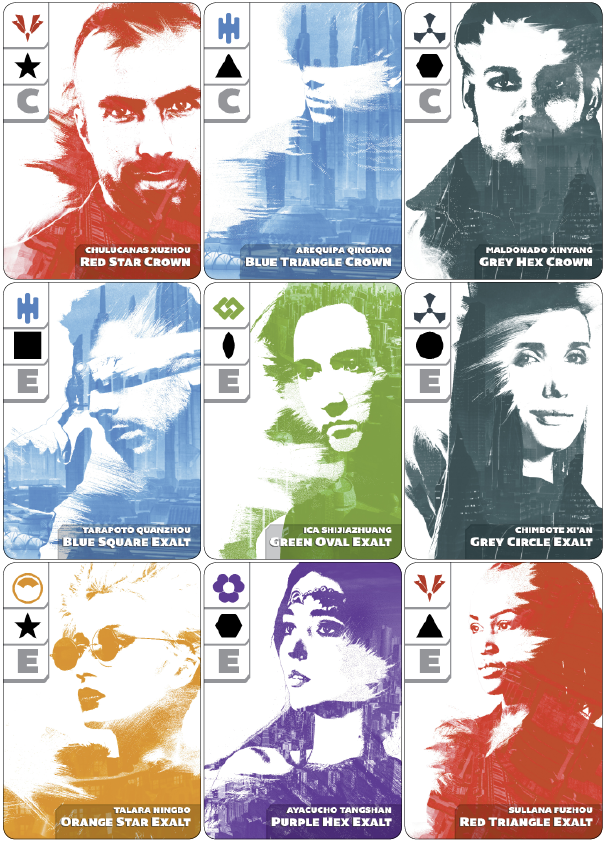 Open graphic design question: What's a good replacement for the shapes on these cards that does not imply value or rank, that also fits well with the color icons and the letters?

Some background: Each card represents someone in the turbulent nation of Regime. You're trying to build a cabinet that will gain the most popular support of the nation. Each card is a unique combination of three suits: Color, Shape, and Letter. There are six possible colors, six possible shapes, and six possible letters.

The colors each have a unique icon to aid color-blind players, but also conveniently works as a thematic detail. Each color represents a political party in Regime.

The letters are the initial of six different titles within those political parties: Crown, Archon, Voice, Exalt, Minister, and Sovereign.

The only suit giving me trouble are the shapes. These used to be numbers, but numbers implied values when they're really just another suit. This confused new players when they're first learning the game. Unfortunately, the shapes also get confusing when paired with the unique icons for each color. They don't naturally imply a thematic trait for the character either.

What would be a good alternative? In particular, an alternative that fits within the quasi-political theme of the game?
regime