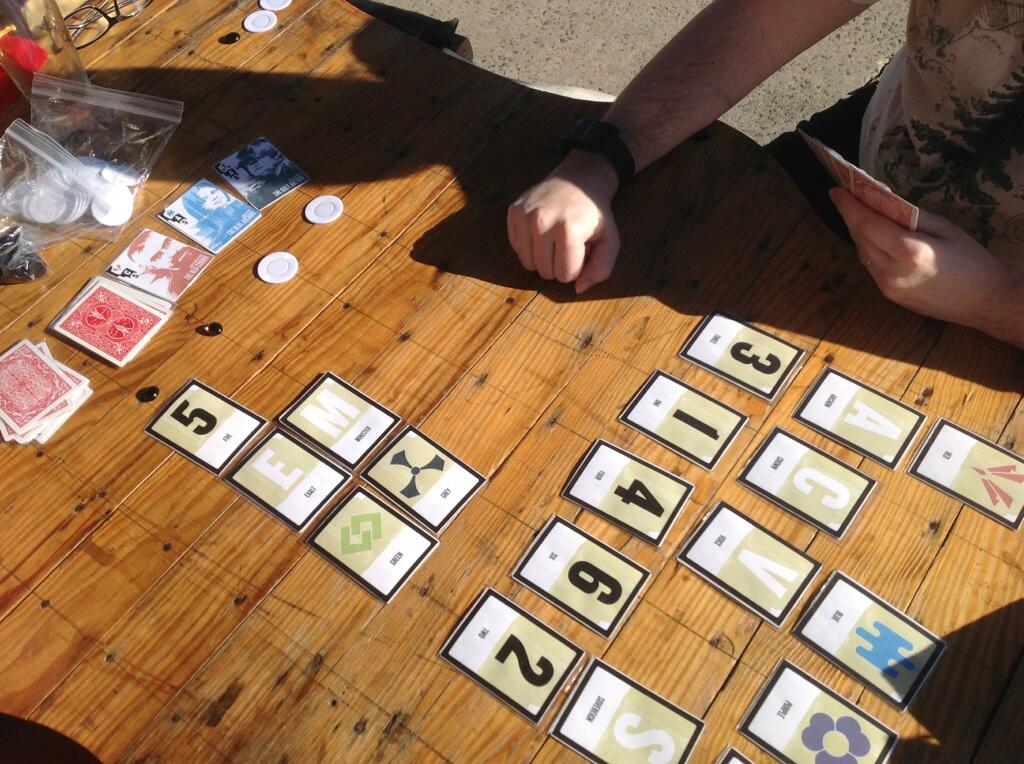 I was fortunate this weekend to sneak in a quick playtest of some new rules I wanted to try out for Regime. As you might recall from last week's post, I worried Regime's central mechanism didn't have enough granularity in scoring and it offered too many choices in early turns without much strategic direction.

I still liked the idea of managing your assets being a separate action from managing the values of those assets. (Biblios does this splendidly, as does For Sale, which is also why I avoided auction mechanisms.)

So here are the revised rules. The big change is that the order in which suit cards are eliminated now matters. These do not require any new cards, but it may help to keep some tokens around to represent Unrest, Calm, and Popularity. You can easily keep track of this with a score sheet though.


Revised Set Up
Shuffle the 36 unbordered CHARACTER cards. Deal a hand of five cards to each player. The remaining cards are set aside as a face-down deck. 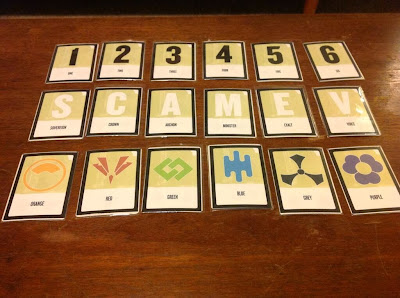 Play
The player who has most recently been to another country takes the first turn in the first round.

You may only do one action on your turn, either Trade or Oust.

Trade
Remove a character card from your hand face-down into a discard pile. Then draw a new card from the deck into your hand. Your hand limit remains 5 cards. It never reduces or increases. If the draw deck is empty, you may not trade again until the next round.


Popularity Track
Each of these spaces has a unique scoring condition, which will be discussed below. For now, it's important to know how each space should be labelled in each round.


End of the Round
The round ends when all but the last faction card from each row has been assigned. Move those last remaining faction cards to the rightmost space of the Popularity track. Now all players reveal their hands and proceed to scoring.

In the example above, the player first checks the "Unrest" column and compares it to her hand. She has no reds, 2 Voices, no ones, so she earns 2 Unrest.

Next she checks the "Calm" columns and compares them to her hand. She has no Orange, 1 Purple, 1 Minister, no Exalts, 2 threes and 2 fours. So she earns 6 Calm.

Finally, she checks the "Points" columns and compares them to her hand. She has 1 Grey, 1 Green, 2 Blue, 1 Crown, 1 Archon, no Sovereigns, no twos, 1 five, and no sixes. So she earns 6 points this round.


The Revolution
Between each round there is a revolution that topples the most powerful factions of the nation.

After each round, move all of the table cards back to their grid, except the most popular faction cards. Those now begin in the leftmost space of the next round's popularity track.

If the draw deck is empty, shuffle the discards and make a new draw deck. Otherwise, leave it as-is.

Your hand remains the same as well. So be careful, a powerful hand in one round might be very dangerous in the next round.


End of Game
The game ends after three rounds. Now players adjust their scores based on their accumulated Unrest and Calm.

The player with the most total points wins.

If tied, the tied player with the most Unrest wins. If still tied, the player with the least Calm wins. These tiebreakers reward players who managed to get a winning position despite being handicapped by a lot of Unrest or little Calm.
regime