Playtest results for Kigi (which may need a new theme) 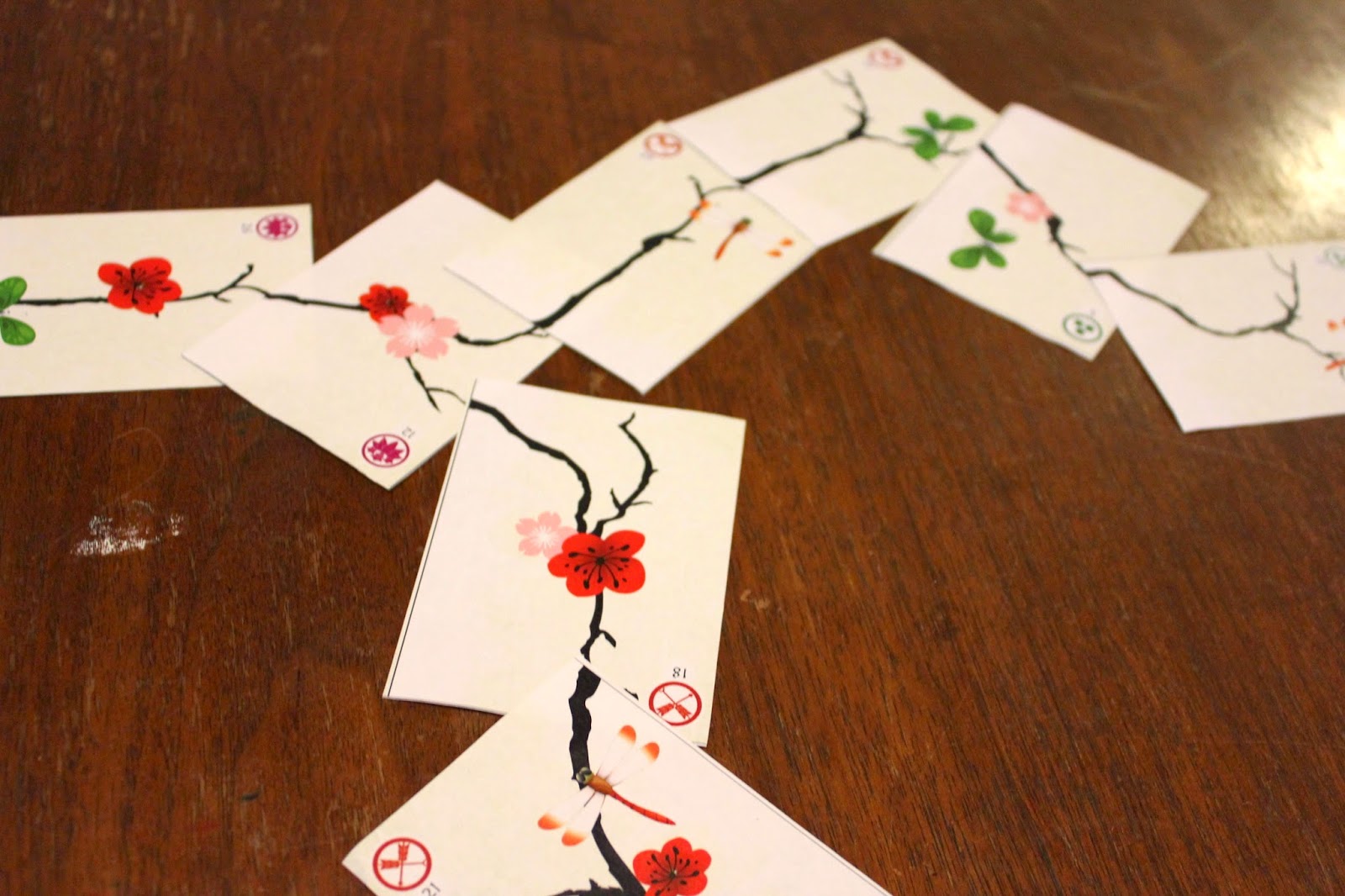 I've had these very loose prototypes floating in my workshop for months and never really settled on a proper set of rules for them. I knew that I wanted it to be an "organic" game, free from a grid. I also knew I wanted it to be a game that produces a pretty picture when the game is over. Something that draws a crowd as it is played.

But finally I just decided I'd whip together the minimum viable rules I could think of, just to get it down on the table and actually in action.

[UPDATE October 2014: These rules are for an older prototype and are not indicative of the final game available on DriveThruCards. These old rules are just saved here on this blog post for posterity.]

For context, there are 45 numbered cards. Each has a branch formation along with dragonflies, butterflies, red flowers and/or pink flowers in various combinations. There is roughly an equal amount of each across the deck, but I randomized their distribution. Each card also has one of five family crests, nine of each crest randomly distributed across the deck. Again, I was really aiming for an organic feel here.

In the game, players cultivating a grove of trees, one tree in front of each of player. On your turn, you draw a card and add it to any tree. You simply place your card such that it appears to branch from the tree. Now trace the path from that card down the limb all the way down to the trunk. If your card is the highest numbered card in that limb, you can score. You score 1 point for each flower or bug on that limb that matches the card you just placed.
The game continues in this manner until the whole deck has run out of cards. Then players get bonus points. Gather up all the cards in your tree and count how many of each family crest you possess. You earn 10 points if you have the most of a family crest. 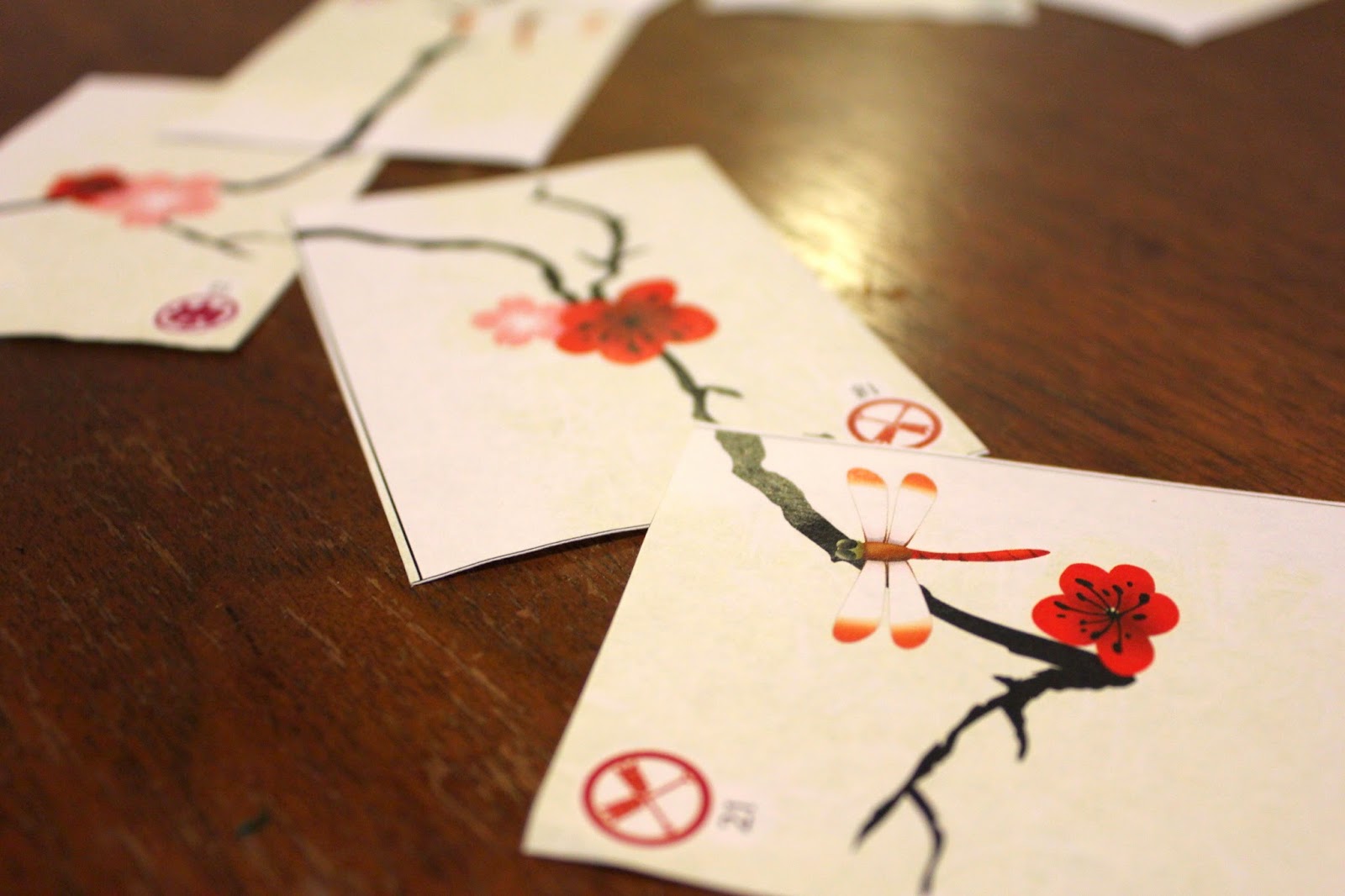 Findings
Pretty, but Awkward Visuals: Playtesters liked the prototype art, but it needs graphic design adjustments to make branching more easy to do. It's best for the "trunk" of each card to bleed off the corners rather than the sides, so you have a broader range of rotation. However, those awkward cards did come in handy as a spatial block for opponents. Leaving a few in the deck might be handy.

Make Crests and Ranks Obvious: Instead of one family crest and one number on the corner, which may be obscured, I'm going to make a small wallpaper pattern which has the number and crest as a sort of polka dot pattern in the background. Instead of sequential numbers, I think I'll try breaking up each crest into their own sequence of ranks from 1-9. In this way, I can use a set of dots or other symbol to represent rank instead of a number, which may be obscured depending on orientation.

Scoring Works Fine: Ultimately top 3 scores range in the 50s for a 4-player game, which is better than I expected for an arbitrary set of rules with a mostly randomized distribution of "suits" across an oddly sized deck. Sometimes a minimum viable product is worth bringing to the table, I guess.

Similarities to Other Games: There was a good decision space in scoring immediate points for yourself by growing an opponent's tree or keeping a family crest on your tree even if it didn't score points right now. There was some Carcassonne-like feeling of being hemmed in to a small set of placement options, some of which may not score points immediately but which could prove useful later. Arranging the cards makes you feel like you're really cultivating a pretty garden or a bonsai tree. The organic card placement also reminds me of String Railway, too. 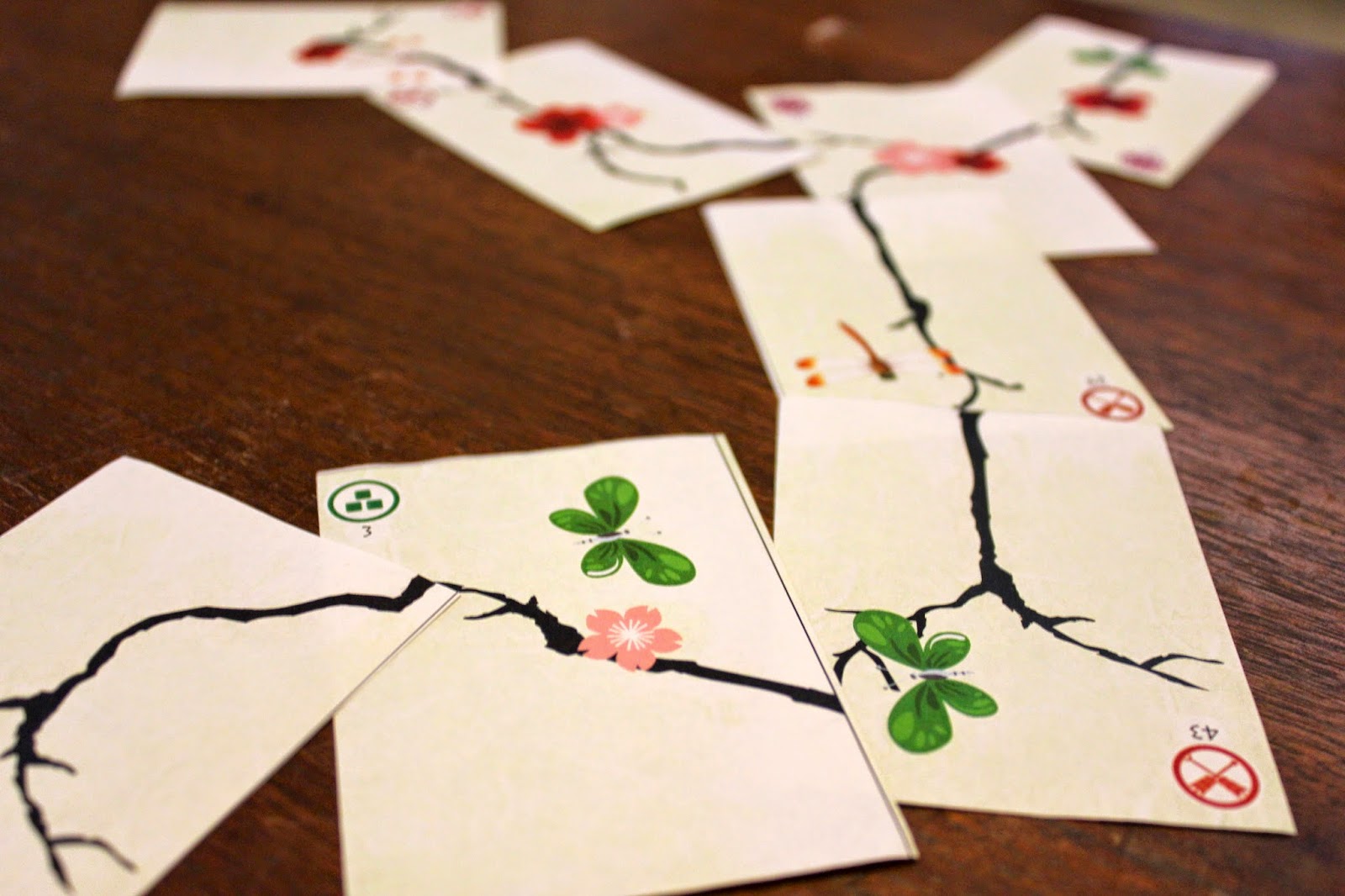 New Theme?
Overall good findings. I'm not sure this theme works for the game. Often there were situations when a player wanted to play a card which made sense mechanically, but which visually didn't make sense. A branch that grows down curving below the trunk? Perfectly legal, it just didn't make sense with the theme.

I could simply make a rule that you can't grow below the trunk, which is fine, or I could change the theme so this is a non-issue. Rivers? Tunnels? I'm not sure. Either way, I'm happy that the mechanisms themselves proved sound and playable.

If I do change the theme to rivers, I might revive the River Ancient theme a bit. Not sure yet. Your thoughts?
kigi river ancient