Since the most recent post on Nine Lives, I've had a chance to playtest the game about five times with two different groups comprised of around ten players, aged 9 and up. Naturally, I've found some bugs. 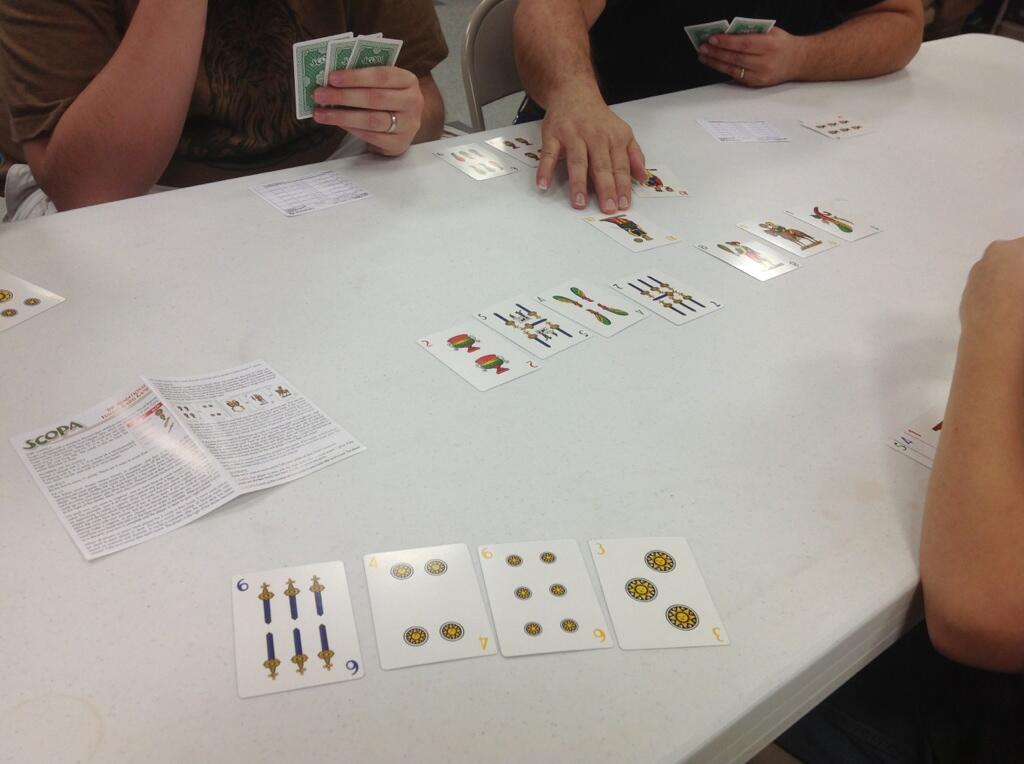 After playtesting for a while, the group decided to pick up a game of Scopa, the traditional Italian card game. None of us had ever played before, so we learned from the rulebook. As I've mentioned about folk games, they're usually full of weird exceptions and local idiosyncracies without much cultural context.

Sure enough, the game tended to drag, scores were awkward to calculate, and we abandoned it after a few rounds. Later, I learned that the game is better as a four-player partnership game, despite the box saying it could play with up to six. I can see how it would be a bit faster with a smaller group.

But aside from that, I was stunned with the similarities between Scopa and what I was trying to do with Nine Lives. It had the same basic skeleton: Each player has a hand of cards, must trade with a central lane, collect cards into a tableau, then score based on a variety of set collection mechanics.

So, I'm going to test a few things I learned from Scopa in my next playtest of Nine Lives.
Scoring will be revised in the following way. Note that each of these scoring conditions refers to specific cats, meaning that each score could be earned per cat.
And lastly, a few gamers suggested more interactivity in the game, so I'm going to try out some special actions associated with each cat. When bids are revealed, the actions are resolved in ascending order, then bids are resolved in descending order. (Libertalia style.) Fluffingsworth triggers allergies.
Each other player must discard a random card from her hand to the alley. Achoo! Chirp loves to pounce on tiny things.
Trade one card from your tableau for a card of higher rank from another tableau. Admiral knows who is in charge.
Trade one card from your tableau for a card of lower rank from another tableau. Dandy loves to share.
Trade one card from your tableau for a card of the same cat from another tableau. Neko got into the catnip again.
Each player takes a random card from the hand to her left. Boop needs a playmate.
Trade one card from your tableau for a card of equal scratches from another tableau. Loaf is still sleeping.
Flip over a face-up card in any tableau so it is now face-down. (These don't score at the end of the game.) Shiny knows how to get a treat.
Score 1 point if this is the only Shiny bid this turn. Tummy sure does love tummy rubs.
Flip over one face-down card from any tableau so it is now face-up.