An Interesting Idea for a Planet-Building Game

I love the Little Prince board game that came out this year. I was curious about the design history behind its elegant drafting and scoring mechanics. Originally, Antoine Bauza conceived the game with several tiny planets per player, rather than building one planet as a whole. He and Bruno Cathala eventually went a different direction, but I was still curious about that theme.

I thought there might be some potential in a game where you still built planets, but a little faster and using Keyflower's orientation-based ownership. Below is a slide presentation outlining my initial thoughts for the cards and gameplay. 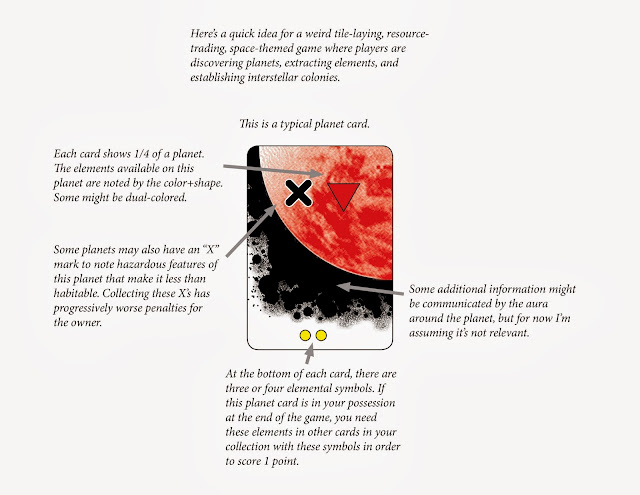 Here's an overview of a typical planet card. Each card shows 1/4 of a planet. The elements available on this planet are noted by the color+shape. (Some might be dual-colored.) Some planets may also have an “X” mark to note hazardous features of this planet that make it less than habitable. Collecting these X’s has progressively worse penalties for the owner.

Some additional information might be communicated by the aura around the planet, but for now I’m assuming it’s not relevant.

At the bottom of each card, there are three or four elemental symbols. If this planet card is in your possession at the end of the game, you need these elements in other cards in your collection with these symbols in order to score 1 point. 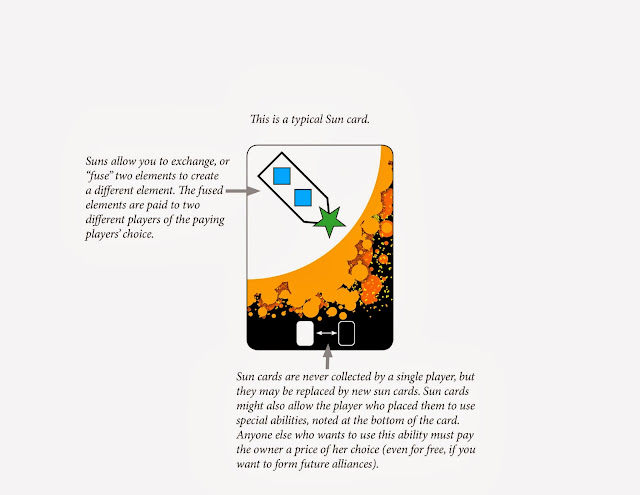 This is a typical Sun card. Suns allow you to exchange, or “fuse” two elements to create a different element. The fused elements are paid to two different players of the paying players’ choice.

Sun cards are never collected by a single player, but they may be replaced by new sun cards. Sun cards might also allow the player who placed them to use special abilities, noted at the bottom of the card. Anyone else who wants to use this ability must pay the owner a price of her choice (even for free, if you want to form future alliances). 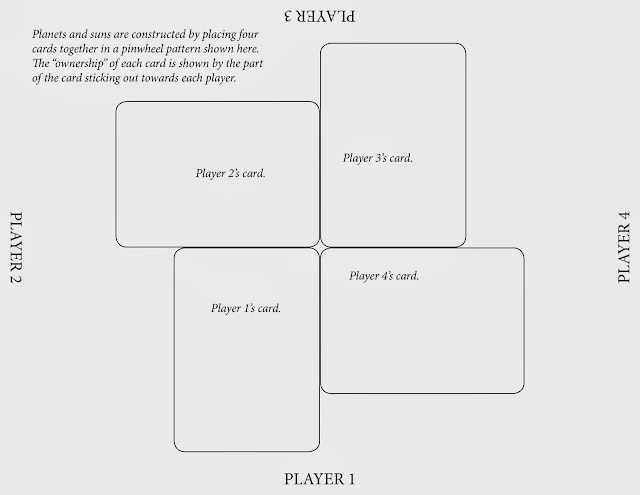 Planets and suns are constructed by placing four cards together in a pinwheel pattern shown here. The “ownership” of each card is shown by the part of the card sticking out towards each player.

Note: Planet cards are designed so that there is only one orientation in which they may be placed to form a whole planet, while suns are oriented the other direction. Their respective art would be different enough to show the difference, but the orientation tweak makes it impossible to mix them together. 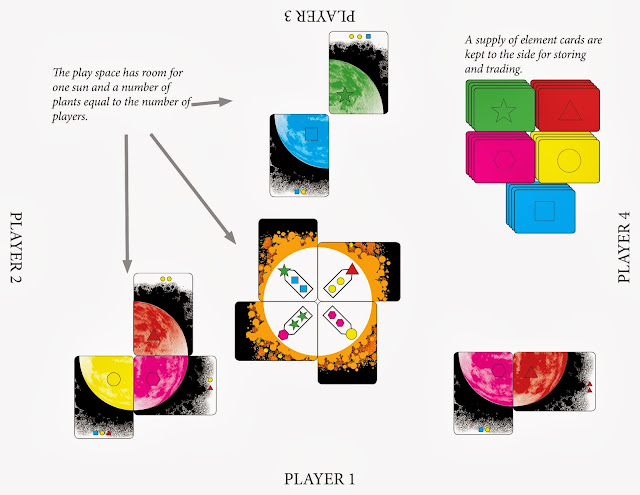 This is an overview of the play space. The play space has room for one sun and a number of planets equal to the number of players. A supply of element cards are kept to the side for storing and trading.

During set up, each player drafts one sun card to start the "system." Thus establishing the available elements and special abilities for each round.

On their turn, players draw one card from a face-down deck and play it to a planet of her choice, in any orientation. You could complete a planet even if that final card card is pointed another player. 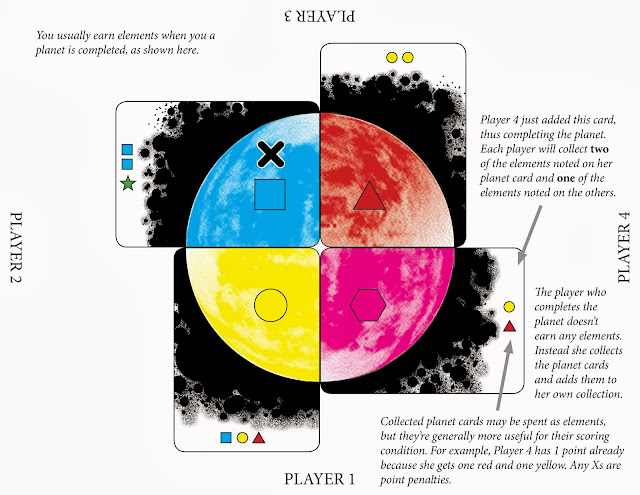 A planet is complete when it has four cards, as shown here. When a planet is completed, two things happen: First, each other player gets some elements. Second, whoever completed the planet collects the cards comprising that planet.

In the example above, Player 4 just added a fourth card card, thus completing the planet.

The player who completes the planet doesn’t earn any elements. Instead she collects the planet cards and adds them to her own collection. So Player 4 collects these four cards. She doesn't need to keep them in their planet-shape, though. They just go into her general collection.

Collected planet cards may be spent as elements, but they’re generally more useful for their scoring condition. For example, Player 4 has 1 point already because she gets one red and one yellow as a part of this deal. Any Xs are point penalties. (I haven't decided yet how bad those penalties will be.)

Also, I haven't figured out an endgame or even an end-of-round condition. For the moment, I was just enamored with the visual of players building planets in this way. There would be a lot of work to do to make sure the economies really worked correctly.
lab