4 reasons why UnPub4 was great (and how to make yours great, too) 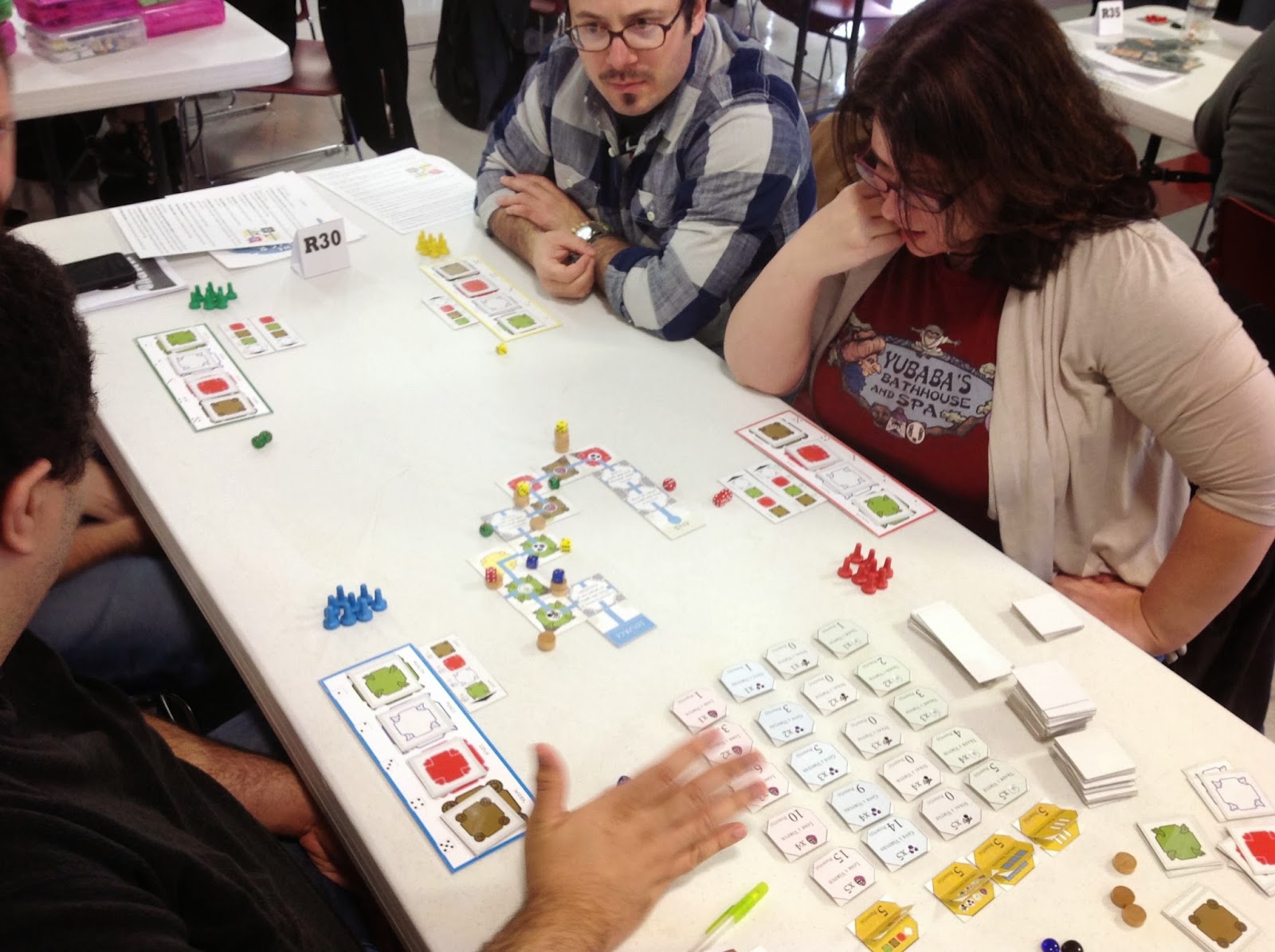 In a word, UnPub4 was a crucible. The game I brought Saturday morning was quite different than what came out Sunday night. It emerged sleeker, simpler, and more fun. Here are four reasons why UnPub4 was such a success, and some takeaways to make your next UnPub a success, too.

#1 MacGyver Factor
Because I was limited to whatever I had available to me at the event, I couldn't fall into the trap of just adding new mechanics or components to fix problems. Instead, I had to trim, edit, revise, and tweak. If point values were a problem, I used white-out or adhesive stickers to make edits. If components were a problem, I just removed them instead of wasting time between playtests.


#2 Variety of Playtests
My first two tests had very enthusiastic and happy players. They gave very positive feedback, which was a great way to start the event. My third playtest had more game designers, publishers, and veteran euro players who gave much more grounded feedback with constructive advice.

We all spotted some unexpected emergent gameplay that led to some un-fun runaway leaders, but we didn't make edits mid-stream. We just followed the game as it was presented until it reached its conclusion, then discussed possible solutions. Further playtests refined those bigger changes after that early play session.

Takeaway: Be observant of player behavior, emergent patterns, mood shifts, and most especially any rules that got missed in your initial spoken rules description. It never hurts to repeat a rule or a point of procedure, even if you eventually feel like you sound like a parrot. UnPub is busy and distracting, so you must be persistent and patient.

#3 Generous Advisers
Even outside of the playtests, I was surrounded by some of the friendliest and most generous creative people in the hobby tabletop industry. Between playtests, while I was hurriedly scribbling numbers or applying stickers, folks came by to talk out some of my problems from the prior playtest.

From these discussions, my game went from phased play to turn-based play, with greatly adjusted point values that created multiple paths to victory. In return, I tried to make myself available to talk about other people's games and help them overcome their own hurdles.

(I'm pretty sure I ended up taking more than I gave, though.)

Takeaway: Even time not spent playtesting can be productive for your game. Talk out your problems with friendly audiences. Pay it forward by asking about their own games in exchange. You'd be surprised how universal some problems are, even between vastly different games.


#4 Industry Presence
UnPub has quickly become a farm team for tabletop publishers. Dozens of games have graduated from UnPub's main event or satellite UnPub Mini events around the world, becoming published games on your store shelves.

This year alone, seven games were signed by the end of Sunday. Who knows how many more will be picked up in weeks and months to come? I do hope UnPub as a program keeps playtesting and development as its core mission, having an industry presence at the main event is a nice bit if inspiration for all the designers present. Just being able to talk out a pitch with a real publisher is educational for any new designer.

In my case, I didn't intend to get signed because I knew my game wasn't ready yet. I just wanted to get it played and revised. Having industry at the table was still very useful.

Takeaway: Know your goal for UnPub. Do you want to get signed or just get feedback for a game still in development? Designers around you might be getting signed by publishers, so prepare your emotional state for that. Do not fear rejection, use it as a stepping stone.

Overall it was a fantastic four-day visit. I got to playtest The River Ancient a total of 7 times, for players ranging in age from 10 to mid-50s. I also demoed Suspense: the Card Game, Nine Lives Card Game, Koi Pond, and promoted Belle of the Ball.
river ancient unpub4